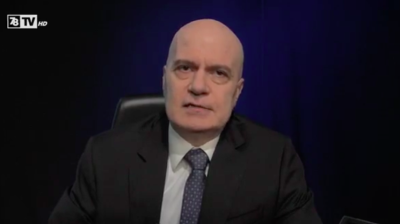 Slavi Trifonov made his first formal statement in three months after his ITN party took a narrow lead in the July 11 general election.
By Denitsa Koseva in Sofia July 12, 2021

Popular showman Slavi Trifonov, the leader of There Are Such People (ITN) party, which is winning the July 11 snap general election in a photo finish, said the party will not enter into coalition with any political party but will propose a government led by former deputy PM Nikolai Vassilev.

With 98.92% of all votes counted, ITN is leading decade-ruling Gerb with 23.91% versus 23.69%. However, the result has changed several times during the counting and is still uncertain.

“The acting system is generating huge injustice and is generating non-dignified people to rule Bulgaria,” Trifonov said in his first formal statement for the past three months, made live on his 7/8 TV channel on July 12.

Trifonov once again said his party will not enter in coalition with the so-called parties of the status quo – Gerb, the Bulgarian Socialist Party (BSP) and the ethnic-Turk Movement for Rights and Freedoms (DPS). However, as the three anti-establishment formations – ITN, reformist Democratic Bulgaria (DB) and Stand up! Thugs out! (ISMV) – will not get a majority of 121 out of 240 MPs in parliament, Trifonov said the party’s decision is not to enter in coalition with any formation at all.

He added that ITN is proposing a government of experts that will have specific tasks and deadlines to achieve them.

There are few people with political experience in the proposed government and many who have either graduated in the US, made a career there, or both. However, the indirect connection with the DPS and BSP was seen by many as a sign of an informal coalition with these parties, which sparked strong criticism.

Trifonov also said that ITN has proposed to three successful ministers of the current caretaker government – Minister of the Economy Kiril Petkov, Finance Minister Assen Vassilev and Minister of Education prof. Nikolai Denkov – to become members of ITN’s government but they have refused.

The three ministers issued a joint statement attributing their refusal to significant differences in their vision for financial policy and the priorities for the coming period. Moreover, ITN proposed that Vassilev head another ministry, not the finance ministry.

“That is why all three of us decided that it is better for the future government to have a team that shares the vision of the prime minister and of the mandate-holder for the financial policy of the country,” the three ministers said in the statement.

Trifonov also announced the priorities of the proposed government, including completion of all motorways, construction of a new children’s hospital and kindergarten buildings. Among the priorities is also for Bulgaria to send two Bulgarian and one North Macedonian astronauts to the European Space Agency, which was seen as rather entertaining than a serious priority.

“The astronauts, and particularly the Macedonian astronaut, is rather a joke, even if the idea is realised,” political analyst Daniel Smilov commented as quoted by Dnevnik news outlet.

Critics to the proposed priorities commented that ITN has not taken into account the economic crisis caused by the coronavirus (COVID0-19) pandemic, as well as the expected new peak of the pandemic. Moreover, no significant reforms of the judiciary are being set. Trifonov only said his party proposes the removal of the specialised prosecution and the specialised court.

Trifonov also announced as priorities the fast reduction of the state administration and implementation of e-government, as well as the introduction of a two-round system for the parliament.

The proposed government and priorities were accepted with disappointment by those hoping for a major change in Bulgaria’s political life with many people wondering why has Trifonov decided to go for a government without coalition.

“With 24% support Slavi Trifonov requested card blanche for ruling the country and defining its priorities. The proposed government is of expert type, in which many of the ministers do not have adequate experience,” Smilov commented.

He suggested that the formula picked by Trifonov would allow his party to negotiate support from political parties in parliament for each reform it wants to undertake. However, this “could lead to replacement, not change”, he said.

Lawyer Hristo Hristov commented to Dnevnik that Trifonov's proposal “does not have much in common with the democracy”. He also criticised the nomination of Vassilev due to his involvement with political parties that have lost voters’ trust.

“Trifonov is proposing an independent government of experts who know [foreign] languages. The responsibility for the potential failure of the new attempt lies on the anti-establishment parties [DF and ISMV] and BSP. Clever,” Ivaylo Dichev, professor of anthropology, says.

Economist Evgeniy Kanev commented that the proposed government does not include any bright representative of the protests from the past year or people with strong public opinions.

Ilian Vassilev, former ambassador to Russia, suggested the proposed government was approved by the DPS.

“You are being presented people with bright CVs – like football players, but you are not being told the scheme of the game,” he commented, criticising the lack of dialogue. “Let’s not forget that the votes received for ITN are below 9% of all voters and they should rule with such self-esteem?”