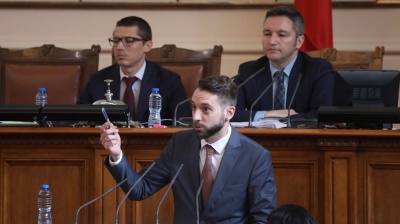 Bulgaria’s parliament approved in its final reading the closure of the specialised court and prosecution on April 14 in a move seen as a step towards restoration of the rule of law in the EU’s most corrupt country. The vote went ahead despite fierce objections from chief prosecutor Ivan Geshev.

The specialised prosecution and court were created ten years ago by then government of former ruling party Gerb and were seen as a tool to put pressure on those opposing Gerb and the ethnic-Turk Movement for Rights and Freedom (DPS).

“Thank you for the support, thank you also for the debate. This is a bill that is being discussed very turbulently and very thoroughly and we have shown that we can hear, asses critics and – where an improvement of the bill is being pursued – to accept them. I want to clearly state – speculations, wrong interpretation and delusion are [the claims that] our efforts for judicial reform stop here and that we do not know what we are doing,” Justice Minister Nadezhda Jordanova said to lawmakers following the vote.

Gerb and the DPS voted against the decision following the hours-long heated debate. They claim the amendments aim to serve criminals and would harm the rule of law.

Jordanova added that the government will also work on a mechanism for effective investigation and accountability of the chief prosecutor. Bulgaria has been urged for years to adopt such a mechanism but previous Gerb-led governments failed to do that.

The magistrates working for the specialised court and prosecution will be re-assigned to the regular institutions.

Geshev commented on the parliament’s decision, which was one of the top priorities of the four-party ruling coalition, saying it will refer it to the constitutional court.

The legislation changes also put an end to special bonuses for top-magistrates, which was also objected to by the opposition.