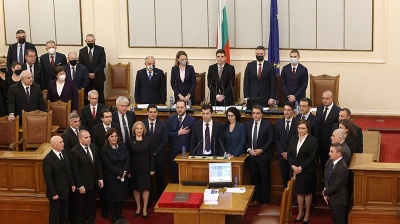 The new government led by Kiril Petkov is backed by his Change Continues and three other parties. / parliament.bg
By Denitsa Koseva in Sofia December 13, 2021

Bulgaria’s parliament approved a new government led by Kiril Petkov on December 13, putting an end to the deep political crisis in the country that has had to vote three times since April in general elections.

Backed by 134 MPs, the government is supported by a four-party ruling coalition comprising Petkov’s Change Continues, the Bulgarian Socialist Party (BSP), There Are Such People (ITN)  and Democratic Bulgaria.

The former ruling Gerb party, ethnic-Turk Movement for Rights and Freedoms (DPS) and far-right Vazrazhdane as expected voted against the government.

“Today is an important day to continue the change – of thinking and of governing. Our first task is to realise that, if we want a better future for Bulgaria, we have to work together,” Petkov said in his speech while presenting the nominations for his government.

He urged the opposition to watch carefully and criticise the work of the government so that it helps the constructive process of deep reforms it intends to undertake.

“I shall be first among equals, only as a team we can achieve our goals. I call on the opposition: follow every step we make. I rely on you to be constructive and critical to our work. I believe that in four years Bulgaria will be a different place,” Petkov said.

He set as top priorities for the government the handling of the coronavirus pandemic, including encouraging people to vaccinate, containing the high energy prices, a new strategy in the energy sector, establishing zero tolerance to corruption and improving economic growth.

“Bulgaria has to catch up with its European partners, our growth should be above 5%, we should become a centre for new companies, we have to attract investments. We have the lowest taxes but due to corruption we cannot attract good producers,” Petkov said.

Petkov also set as priorities modernisation of education, improvement of living standard of retired people, as well as the tourism sector.

He added that, if elected, his first order would be the introduction of mandatory green certificates for all government institutions that should be an example for the rest of the population, which is reluctant to vaccinate against coronavirus. The country is the least vaccinated in the EU, and a global leader in terms of coronavirus deaths.

Assen Vassilev, co-leader of Change Continues, said that a deep anti-corruption programme is the basis of the new ruling coalition. Vassilev was elected as one of Petkov’s five deputies and Bulgaria’s new finance minister.

Gerb criticised the new coalition for nominating Boyko Rashkov to remain interior minister, saying this was a red line that would not allow it to support the new government. Rashkov had been caretaker interior minister since mid-May and revealed schemes of corruption allegedly backed by Gerb’s leader Boyko Borissov.

Borissov, who gave up being an MP and is not taking any public position at the moment, said the new coalition would bring the country to catastrophe.

Meanwhile, the DPS, which has remained silent for days, said it would back initiatives that would guarantee reforms and would act as a constructive opposition.

The leader of DPS Mustafa Karadayi said that the parliament should restore democracy and that the country needs a regular government to support these expectations.