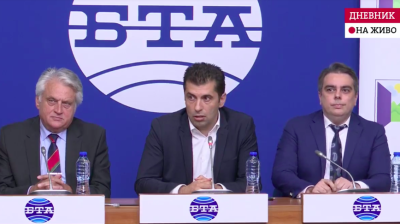 Bulgaria’s ruling coalition split on June 8 as representatives of the There Are Such People (ITN) party walked out of a budget meeting, and the party’s leader declared he was pulling out of the government.

The party’s leader, former showman Slavi Trifonov, said he is withdrawing ITN’s minsters from the government after a dispute with Prime Minister Kiril Petkov over the allocation of funds. Trifonov also claimed Petkov had promised to lift Sofia’s veto on the start of EU accession talks with North Macedonia and accused the prime minister of treason.

Petkov said that despite ITN’s departure his Change Continues party will remain in power at the helm of a minority government.

The Bulgarian Socialist Party (BSP) and Democratic Bulgaria, the remaining parties in the four-party coalition, have already said they will continue to back Petkov.

At a press conference on June 8, Petkov accused ITN of trying to force the government to include an additional BGN3.6bn (€1.8bn) for the regional development ministry headed by a member of ITN, and warned that the money was intended for companies currently being investigated for large-scale corruption during former prime minister Boyko Borissov's former government.

“Minister [of Regional Development Grozdan] Karadzhov has requested an increase of BGN3.6bn [of the funds for his ministry] to be paid to the same companies that were investigated by [Interior] Minister [Boyko] Rashkov in the past years for abuse of funds,” Petkov said.

Aside from the tussle over funding for the regional development ministry, Petkov also accused ITN of not allowing a reform of the anti-corruption body. He added that the draft law on the reform will be tabled to parliament on June 9, and said he hopes there are people in ITN that would back it.

He added that he would rather have a minority government than to be pressured to give money to corrupt companies.

However, it is unclear whether Petkov — who came to power with a reformist agenda in December 2021 after the third general election of 2021 finally produced a majority in parliament — will be able to remain in power.

Losing ITN’s MPs means the government has only 109 MPs in the 240-seat parliament. Petkov’s ability to continue to muster sufficient support will be tested by the vote on the revised budget or on the appointment of replacements for ITN’s ministers.

There is already speculation that ITN’s move could have been coordinated with Borissov’s Gerb party. Borissov said a few days ago he was ready to rule now, not after a new election.

Should Petkov fail to stay in power, the options would include a new coalition between Gerb, ITN and the far-right Vazrazhdane party, or yet another election.

While the current coalition has only been in office for six months, several rifts had already appeared between its members.

The pro-Russian BSP opposed the plans of Change Continues and Democratic Bulgaria to send military aid to Ukraine though a compromise was eventually reached.

Meanwhile, ITN clashed with the other members of the coalition over the appointment of Bulgaria’s next central bank governor. The party put forward its own candidate, despite Petkov’s Change Continues also making a nomination.,

At the press conference Trifonov also accused Petkov of “national treason”, claiming he promised to lift the veto on the start of EU accession talks with Skopje without consulting with his coalition partners. Bulgaria is under pressure to lift its veto ahead of the EU Council meeting later this month, but it is a politically sensitive issue.

Commenting on the day’s events at a press conference, Trifonov said: “I am pulling out the  ministers from the government and putting an end to the agony.”

Democratic Bulgaria’s Hristo Ivanov warned that the collapse of the coalition would push Bulgaria into chaos.

“Probably everyone wants to end the coalition, but that doesn't end the agony. Because what was missing in Mr. Trifonov's statement is what's next for the country from here on out…. maybe the Coalition should rethink a lot of things about how it works. I think we can all agree. But I claim that we have no right to push the country into even more chaos,” he said in a comment posted on Facebook.

Under the budget revision drafted by the government, pensions would be increased twice by the end of the year – in July and in November — while excise duties on electricity and gas would be removed as part of the anti-crisis measures. Another BGN230mn will go to ease the tax burden on families with young children, according to the draft put up for public review on the finance ministry’s website. There are also plans to cut VAT on natural gas, bread  and heating and hot water.

To compensate for the lower revenue and higher spending, the government intends to increase the VAT on beer and wine sold in pubs and restaurants, and to hike tobacco excise duty.