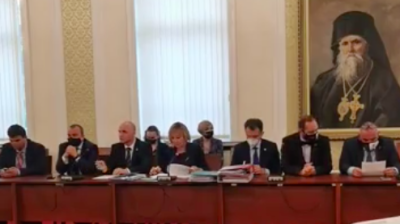 The committee set up to investigate the work of Boyko Borissov's government.
By Denitsa Koseva in Sofia May 6, 2021
Svetoslav Ilchovski, the owner of an agricultural company in Bulgaria, accused outgoing Prime Minister Boyko Borissov of being involved in a gangster-style extortion of money from businessmen in a damning testimony to a parliament committee.

The committee was set up to investigate the work of Gerb’s outgoing government and Borissov’s previous cabinets. The prime minister, who failed to form a new government after the April 4 general election, was involved in a series of corruption scandals during his third mandate but so far the prosecution has not charged him.

Borissov has already denied the allegations made by Ilchovski, claiming they were made to discredit him and the achievements of his government.

However, they sparked outrage in Bulgaria, with commentators on social media comparing the government to the regime of 20th century Chilean dictator Augusto Pinochet.

Speaking to members of the committee, Ilchovski said he was repeatedly pressured by people close to Borissov. Associates of the prime minister forced him to sell his products at lower prices and to back away from an agricultural land purchase, he claimed. He also said state agency representatives forced him to pay a racket if he wanted to get water for his plantations. He did not provide documents proving his accusations but said he has them and will provide them to the committee.

In his most shocking claim, Ilchovski said he attended a gathering alongside Borissov and several businessmen at which he was shown a video of a sexual assault on the owner of Vinprom Karnobat, Minyo Staikov who was detained in mid-2019 over alleged misuse of EU funds.

“It was projected at a hunting residence of [communist-era dictator] Todor Zhivkov, Vitoshko-Studena. Many people attended [the meeting],” Ilchovski said during the session live broadcasted by the committee’s chair, Maya Manolova, on Facebook.

“[It was projected] to show what happens to those who do not obey,” he adds.

Ilchovski said he does not have a copy of the video, but that he has another video featuring a “highly-paid female companion” who, he alleged, received BGN5,000 (around €2,500) for providing sexual services to Borissov. In the video, the woman says she was responsible for the photos that went public last summer, showing Borissov sleeping in his bedroom next to a Glock 9mm handgun and a drawer full of €500 bills and gold bars. At the time, Borissov confirmed their authenticity, saying they were taken in the residence he is using as premier.

“At a birthday of our premier first comes his paymaster who is helping him with money laundering – [one of the owners of the biggest poultry company Gradus] Ivan [Angelov dubbed] Pileto [The Chicken] – and brings him a small gold bar. Then another who deals with mining – [the owner of Geotechmin] Tsolo [Vutov] brings much bigger gold bar,” Ilchovski told the committee.

He added that Borissov asked Angelov whether he wanted to give him “just that small bar”, after which the businessman bought him a second, larger one.

Ilchovski accused Angelov of urging him to participate in a scheme that would falsely increase the turnover of Gradus prior to its planned bourse listing. He claims he has documents proving this. Gradus held Bulgaria’s biggest IPO in ten years on the Sofia exchange in 2018.

Borissov denied Ilchovski’s accusations at a press conference live broadcasted on his Facebook profile on May 6.

“Do you know what good things we shall file [with the committee]. What things we have prepared for them,” Borissov said.

“I know every step they will take and I am preparing to respond with even greater force,” Borissov said.

He added that everyone who has ever attacked him had lost.

The testimony sparked an immediate response in Bulgaria and a torrent of outrage on social media. In an emotional post on Facebook, PR expert Teodora Petrova wrote that she would be unable to sleep after hearing the accusations.

“This goes beyond all bounds of the possible. … This is really a captured state … A country captured by a gang of mobsters,” Petrova wrote.

Vladislav Panev, one of the leaders of the Green Movement, part of the opposition Democratic Bulgaria coalition, claimed corruption is systemic in the country.

“It is a complex problem, not just to put one or another in jail. … It is systematic,” Panev wrote on Facebook.

“Borissov and his people really think the state is theirs. That is why they howl at the dead. This is a sign that point 1 of the prosperity plan is being implemented – the end of the Gerb pandemic,” he added.

One of the main questions now is whether chief prosecutor Ivan Geshev — who is seen as being close to Borissov and was one of the main targets of mass anti-corruption protests last summer — will launch an investigation.

“Massive graft scandal brewing in Bulgaria. A businessman testifies before parliament that he was shaken down by outgoing PM Borissov to the tune of EUR350-400,000 a year. Alleges Borissov played to him a video of another businessman being sexually violated while in detention,” wrote Dimitar Bechev director of the European Policy Institute in Sofia, on Twitter.

“Svetoslav Ilchovski, the businessman in question, is a large recipient of EU agricultural aid. Was he extorted to kick back a percentage to the PM and/or his entourage? Will the prosector general investigate the allegations?”

The leader of the Bulgarian Socialist Party Kornelia Ninova also called on Geshev to launch an investigation.

Borissov will face voters again in July as after Gerb and the other two largest parties in the new parliament all failed to form governments, President Rumen Radev has called a snap general election and will install an interim government until then.

A poll carried out by Market Links at the end of April showed that, should a general election be held today, Gerb’s support would be considerably lower than in the last general election, putting the party in second place behind showman Slavi Trifonov’s vehicle There Are Such People.

COMMENT: Time to end Putin's impunity
COMMENT: CEE national recovery and resilience plans – the focus, the gaps and what comes next
bneGREEN: IEA calls for $1 trillion of annual investment into clean energy in developing economies