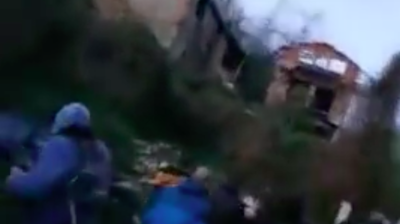 Bulgarian Prime Minister Bokyo Borissov stepped in and ordered a local police chief to resign after two days of protests against the Roma community in the northern Bulgarian city of Gabrovo, but his action failed to stem the protests which continued for the fifth day running on April 14.

The protests were sparked by reports that three Roma men had attacked a local shopkeeper. Tensions between ethnic Bulgarians and the country’s Roma minority which makes up around 6% of Bulgaria’s 7mn population have been stoked by politicians from the United Patriots, three small far right parties that are in coalition with Borissov’s Gerb party.

At the initial protest, demonstrators set fire to two houses where members of the Roma community were living, and clashed with police, resulting in nine arrests and several reports of injuries. More protests took place on subsequent days.

Borissov intervened on April 12, saying that the local police chief should resign, a statement that was followed swiftly by a formal request by Interior Minister Mladen Marinov.

The prime minister also questioned the decision of local police to release the three Roma men accused of the attack on a local shopkeeper. The three have since been taken back into custody.

The following day numbers at the protests increased, News.bg reported, despite a heavy police presence. Police are reportedly searching demonstrators for weapons after some were found to be carrying clubs or metal bars. The interior ministry had not yet provided data on the number of protesters, but local media show footage of people almost filling the town’s central square.

Many Roma families have temporarily left Gabrovo, according to local media reports, and almost no Roma children turned up for school on Friday.

Tensions have reportedly increased in the central Bulgarian town recently, after a decision was made to demolish some derelict houses, several of which were used by Roma families.

VMRO, one of the three parties that make up the United Patriots, responded to the crisis in Gabrovo by calling for the law to be changed to introduce tougher penalties.

Several of the United Patriots leaders have taken an openly anti-Roma stance. Earlier this year, activists and opposition leaders urged Borissov to sack Deputy Prime Minister Krassimir Karakachanov for his anti-Roma statements. Karakachanov said that the Roma minority in Bulgaria “have become extremely insolent and the patience of Bulgarian society has ended”. His statement came after a soldier was severely beaten by members of the Roma community in the town of Voyvodino.

However, Borissov kept Karakachanov in his position, and in January the country’s supreme administrative court (SAC) acquitted fellow far-right politician Valeri Simeonov of hate speech against the Roma minority.