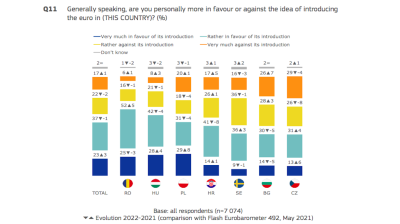 Bulgarians are the most sceptical among all the EU member states that have not yet introduced the euro. / Eurobarometer
By bne IntelliNews June 12, 2022

Bulgarians are the most sceptical among all the EU member states that have not yet introduced the euro - Bulgaria, Croatia, Czechia, Hungary, Poland, Romania and Sweden, a poll carried out by Eurobarometer showed on June 10.

The country’s current government has committed to euro adoption on January 1, 2024. However, 54% of Bulgarians currently are against the introduction of the EU currency.

“Across all countries except Bulgaria, at least a slim majority of respondents think the euro has had positive consequences for those countries already using it; this figure ranges from 46% in Bulgaria to 72% in Hungary,” the poll noted.

55% of respondents across the seven countries expect that introducing the euro would have positive consequences for their country, compared to 41% who expect negative consequences. The most positive were Romanians (65%) and Hungarians (60).

Overall, 60% of respondents are in favour of introducing the euro in their country. In Romania, the opinion is the most positive (77% in favour), followed by Hungary (69%). On the other hand, it is most negative in Bulgaria and Czechia (44%, both) and Sweden (45%).

Poland’s CPI growth rate picks up just 0.1pp to 15.6% y/y in July
2 days ago
Romanian stock exchange reaches new record as BET-TR rises 5.7% ytd
2 days ago
Population decline to take Emerging Europe back to the early 20th century
2 days ago
Russia’s international reserves up $3.6bn in one week to $571bn
2 days ago
CPI inflation in Moldova hits 33.6% y/y in July
3 days ago