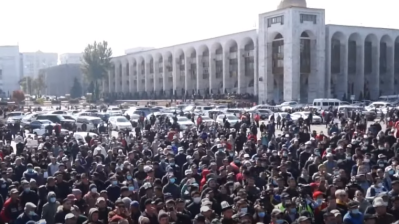 Thousands were back on the streets of Kyrgyzstan on October 7 as rival opposition factions made their bids for power after mass protests at the weekend forced the annulment of the parliamentary election results and sent the president into hiding.

Demonstrators in the capital Bishkek’s central Ala-Too Square demanded that the country’s third revolution since 2005 produce a "clean" generation of politicians to form the next government.

RFE/RL reported that businessman Tilek Toktogaziev appeared to be the Bishkek rally’s choice for at least interim prime minister, as protesters rejected a move made by a parliamentary session that convened in a hotel late on October 6 to nominate opposition politician Sadyr Japarov—freed from prison by protesters just hours earlier—as PM. That decision prompted an angry mob to break into the hotel, forcing Japarov to flee through a back door, according to Kyrgyz media.

Amid the jostling for power, it appears that at least three distinct groups have attempted to claim leadership. The first was a Coordination Council set up on October 6 and mainly composed of established political parties opposing Jeenbekov. The People’s Coordination Council, which says it is backed by many “young professionals”, announced its existence on October 7. It unites five lesser-known opposition parties whose leaders have not held any senior government positions and want a purge of the elite. Finally, the Ata Zhurt political party attempted to steal a march on competitors by getting parliament to nominate Japarov.

The People's Coordination Council said on October 7 that it would not recognise the interim cabinet named by Japarov. It insisted it was assuming all state powers and dissolving parliament in the wake of the resignation of Prime Minister Kubatbek Boronov's government late on October 6.

The whereabouts of President Sooronbay Jeenbekov remain unknown. But October 7 saw him put out a second statement from hiding. In it he called for all-party talks, reiterating his willingness to mediate.

There is some talk among analysts that a north-south split could emerge on how to take the country of 6.5mn forward, with some danger of a violent showdown, or even a civil war.

Melis Myrzakmatov, the former mayor of the southern city of Osh, returned to the city—sometimes referred to as “the capital of the south”—from Turkey on October 7 and immediately addressed thousands of supporters who had gathered in the city square. He said Kyrgyzstan was “in a very dangerous situation” and that "thieves and crooks” were preparing to sow confusion, “but we will not allow this and will fight for the country's integrity and its development", RFE/RL said. Myrzakmatov also reportedly urged those in the crowd "to preserve national unity and resist forces interested in organising a civil war and dividing the country."

Myrzakmatov was sentenced to seven years in prison in absentia in 2015 by the Osh City Court after it found him guilty of abuse of power and corruption. He claimed the criminal case was politically motivated.

Some of the October 7 protesters in Bishkek reportedly said that they represented youth organisations and demanded that "old corrupt politicians" stay away from the government. "The old ones must go," they chanted as they tried to breach the government building. Tensions grew intense as supporters of Japarov moved in front of the building to block the entrance, according to local reports. The protesters then managed to force their way inside the building and Toktogaziev joined other opposition party politicians in debating the composition of the new government and possible new nominations for PM.

Kyrgyzstan borders China and hosts a Russian military air base. Russian President Vladimir Putin said on October 7 that Moscow was in touch with all the sides in the conflict and hoped that democratic process would be restored soon. China’s foreign ministry said it was highly concerned about the situation and warned against “external forces” interfering.

Kyrgyzstan’s State National Security Committee said in a statement that Omurbek Suvanaliyev, a veteran security official who has taken over as its acting head, spoke on October 7 to Alexander Bortnikov, head of Russia’s Federal Security Service to discuss the situation in the country, Reuters reported.

Kyrgyzstan’s central bank said it had disabled SWIFT and other cross-border money transfer systems to pre-empt capital flight until the political situation stabilises.