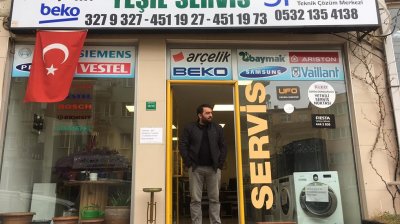 Masses of small shops and businesses, together with their workers, face ruin within weeks under the current situation in Turkey.
By bne IntelIiNews March 31, 2020

Turkey’s Erdogan administration is under growing pressure to deliver substantial “helicopter money” to vulnerable workers and families and introduce a countrywide lockdown in the face of the coronavirus (COVID-19) health and economic emergency.

However, the Turkish economy is in a fragile state and the government has in the past two years exhausted financial resources attempting to recover from the 2018 Turkish lira crisis and subsequent biting recession. On March 30, Turkish President Recep Tayyip Erdogan could offer little more than a call to Turks to “continue production and keep the wheels turning under all conditions and circumstances”.

Both the US and the UK are among nations that have already announced major “helicopter money—or free cash as if dropped from the sky—for wage workers and the poor economically hammered by the COVID-19 crisis, but so far in Turkey such payments form a miniscule part of the Turkish lira (TRY) 100bn ($15bn) “economic stability shield” announced by Erdogan on March 18 and the main opposition Republican People’s Party (CHP) has urged the government to bring in monthly payments of at least 2,000 lira ($304) for families in need until the virus outbreak recedes.

“The criticism [of a lack of financial help for needy citizens] is unlikely to die down as the COVID-19 outbreak threatens to fuel unemployment in a country that already had 4.5 million jobless people last year. Fearful of joining the army of unemployed, many workers have had no choice but to brave the virus danger in crowded environments and continue heading to their jobs in factories, mines and construction sites,” Mustafa Sonmez, a Turkish economist and writer, wrote in a piece published by Al-Monitor on March 30. 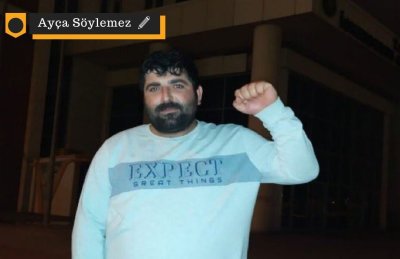 Malik Yilmaz: "There is no bread if I don't work" (Credit: bianet).

The case of Malik Yilmaz, a truck driver who was detained after posting a video of himself on his social media account saying “It is not the virus that will kill me, but your system” neatly illustrates the dilemma of millions of Turks who, faced with advice to stay away from work to help contain the spread of the outbreak, decide they have no choice but to work as a matter of financial survival. "I am not a pensioner, public officer or rich. I am a worker, I am a long-haul truck driver. There is no bread if I do not work. It does not make any difference if I die with your word or due to the virus. But, this virus will not kill me, this system of yours will kill me," said the 29-year-old, who was released on probation, told bianet.

From small shop owners whose businesses have come to a halt amid the pandemic to market traders who have lost most of their customers because pensioners have been told to stay at home to huge numbers of tourism workers swept out of employment by the coronavirus “tsunami” to civil society groups concerned that even official reports appear to show that “the number of children [in Turkey] engaged in economic activities in the 5-17 age group [in Q4 2019] was 720 thousand persons”, the clamour for direct cash grants from the government is only likely to grow.

But, as Sonmez concluded: “In sum, Turkey’s economy was already weak and financial resources exhausted when the coronavirus hit, which explains why the government has been stingy.

“Yet, pressure is growing on Ankara to do more. With many businesses closing shop, swelling the army of jobless, the government can hardly afford to ignore the calls for social support. To answer the calls, money printing appears inevitable down the road at the expense of further spoiling Turkey’s financial outlook in the eyes of foreign creditors.”

Atilla Yesilada, analyst for the GlobalSource think-tank, told AFP on March 31 that Ankara's measures to address economic impacts of the pandemic so far were in line with those of other countries, "but extremely inadequate given the kind of projections I and other experts have in mind.”

In mid-March, the government said nearly 150,000 businesses had temporarily closed. "The American way is the safest way: write a cheque, don't ask questions," Yesilada said. "You're doing it to ensure unemployment doesn't hurt the rest of the economy."

The growing pressure for Erdogan to introduce a lockdown to slow the spread of coronavirus has been added to by two union confederations.

The authorities have not ordered people to stay at home, even as the number of infections in Turkey has risen sharply—officially hitting 10,827 with 168 deaths on March 30 less than three weeks since Turkey registered its first case—and Erdogan has requested citizens voluntarily self-isolate.

The union confederations called for a halt to all but emergency work. “All work should be stopped for a minimum of 15 days except for the production of essential and emergency goods and services,” TURK-IS Chairman Ergun Atalay said in a statement quoted by Reuters.

He also called for a ban on layoffs for the duration of the pandemic and said income support should be provided to all workers who are experiencing loss of work and income. The DISK union confederation issued an identical statement.

CHP party leader Kemal Kilicdaroglu said measures imposed on senior citizens and the chronically ill should be extended to a nationwide “quarantine”.

The CHP’s Istanbul mayor, Ekrem Imamoglu, emphasised the importance of a lockdown in the country’s biggest city, with its population of 16mn.

“If 15% of the city’s population goes out that is 2.5 million people. As the weather gets better people will go out,” Imamoglu told Fox TV in an interview on Monday. “Even if they don’t do it for Turkey, a lockdown can be announced for Istanbul.”

On March 30, Erdogan announced a campaign to collect donations from citizens for those in need. He said he was donating seven months of his salary to the effort and that the appeal had already raised $11mn.

Turkey ‘treads carefully’ as benchmark rate is cut by 50bp

New Iranian parliament under sway of “principalists” elects ex-Guards commander as speaker
1 hour ago
For first time Turkey’s LNG imports outstrip pipeline gas imports
56 minutes ago
A third of Russians believe that the danger of the coronavirus epidemic is exaggerated or a fiction
5 hours ago
Poland announces major easing of coronavirus restrictions
16 hours ago
Tajikistan: Arrests spark fresh unrest in Pamirs
16 hours ago