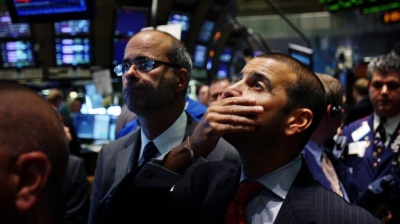 The tide has turned and most EMs have seen modest inflows in July for the first time since the crisis began – except for Turkey
By Ben Aris in Berlin September 2, 2020

Capital Economics’ capital flows tracker suggests that EMs experienced net capital inflows in July for the first time since the coronavirus (COVID-19) crisis began, the think-tank reported in a paper on August 26.

“Daily data suggest that net capital inflows were generally sustained in August, with Turkey a key exception. But even if Turkey’s crisis becomes more acute in the coming months, contagion to other EMs is likely to be more limited than in 2018,” Edward Glossop, senior emerging markets analyst at Capital Economics, said in a paper released last week.

The data was backed up by the Institute of International Finance (IIF), which also tracks capital flows and also reported that investment is returning to Emerging Markets (EMs) after a very large sell-off caused by the impact of multiple crises at the start of this year.

“We estimate that EM securities attracted around $2.1bn in August, lower than the $15.2bn in July,” reports IIF. “Gyrations in the US-China trade narrative, a fresh bout of market turmoil in some EMs and lingering questions on the post COVID-19 recovery path marked the dynamics of non-resident flows during August.”

Debt flows posted their first outflow reading since the March shock at -$2.3bn, reports IIF. On the equity side, IIF says there were inflows to EM equities, excluding China, amounting to $3.8bn, while flows to China posted marginal gains of $0.6bn. Regionally, EM Asia was the most benefited region, registering inflows of $4.7bn, followed by Latin America ($0.7bn), with all the remaining regions posting outflows. 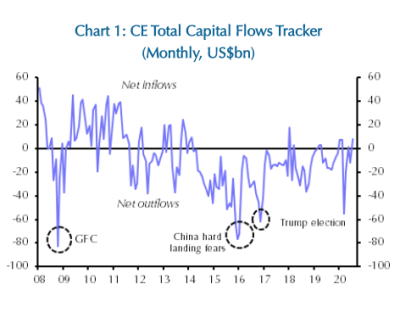 The Capital Economics Capital Flows Tracker is constructed using monthly trade and FX reserve data to give an early read on capital flows ahead of the release of official balance of payments data.

The latest issue of the tracker shows that EMs experienced net capital inflows for the first time since the crisis spread across the globe in July.

“Our Tracker points to net inflows of around $5bn, broadly similar to January and February. And the big picture is that capital flows have weathered the crisis remarkably well. One reason is that our Tracker incorporates FDI and “other” (usually banking sector) flows, as well as portfolio flows,” said Glossop.

EMs were hard hit by the perfect storm that hit markets at the end of February that led to a large sell-off. Then the Russians walked out of the OPEC+ production cut deal on March 6, causing the price of oil to collapse. That was followed by the coronavirus (COVID-19) outbreak in China being upgraded to global pandemic and causing countries around the world to go into lockdown by May.

“The violence of the EM “sudden stop” in March is unparalleled. Non-resident portfolio outflows surpassed anything seen previously, including during the global financial crisis in 2008/9” Robin Brooks, managing director & chief economist at IIF, together with economist Jonathan Fortun said in a note. “However, unprecedented Fed easing, which first lifted US stock and credit markets, also made its way into emerging markets. EM currencies recovered some of their losses earlier in the year, net issuance of bonds abroad has been strong and – most important – our high frequency tracking of non-resident flows shifted positive in the second and third quarters of 2020.” 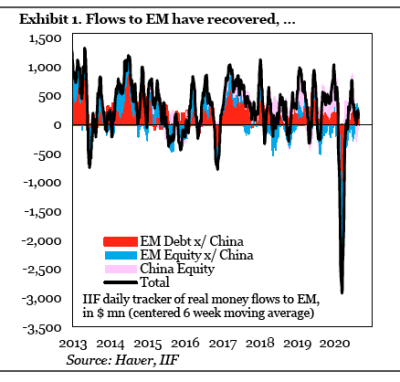 But as August started many of these shocks were beginning to subside. The ruble has slid from an average of RUB63 to the dollar to an average of RUB73.3 in the two months of July and August, maintaining its value remarkably well, recent weakness notwithstanding, given the severity of the economic shocks.

"Nevertheless, our data shows that the rebound in flows to EM is small compared to outflows earlier in the year. One reason may be growing differentiation in flows to EM, with some markets seeing outflows that continue to build. This picture of increased differentiation is in line with our work on currency valuations, which points to persistent overvaluations for some countries," IIF said.

The steady, but modest, inflows have lifted the Russian stock market, which lost half of its value during the worst of the sell-off as bne IntelliNews reported on the occasion of the dollar-denominated Russia Trading System's (RTS) 25th birthday yesterday. While the Russian market remains down some c.18% YTD, two sectors – metals & mining and consumers – have clawed back all their losses and are currently ahead of their starting point at the beginning of the year (7% and 6% respectively).

Capital Economics reports that the “other” category of fund flows collapsed at the height of the crisis, but FDI and banking sector flows appear to have held up better.

In a little reported story, Russia has actually been attracting FDI in 2019, and not just money reinvested by foreign companies that are already operating in Russia, which is the major source of FDI. The net inflow of FDI into Russia in 2019 jumped to $32bn according to Bank of Finland Institute for Economies in Transition (BOFIT), and similar inflows are expected this year.

Glossop argues that FDI is less elastic than other forms of capital and therefore less easily withdrawn during bouts of market turmoil. “And the large-scale monetary easing across the world has helped to prevent a global financial crisis and sudden stop in cross-border banking sector flows,” he adds.

IIF concurs. Its daily tracking of non-resident portfolio flows to EM found that the outflows in March exceeded anything on record, especially when looking at EM excluding China.

“However, the immensity of Fed easing, which first lifted US equity and credit markets, is now also filtering into emerging markets, where our daily tracking of non-resident flows is back in positive territory in the second and third quarters of 2020,” Brooks and Fortun said, adding that Turkey remains the exception, as it is still seeing outflows.

While the net inflow in the July data is encouraging, analysts are less sure about what will happen going forward. To add to the confusion in Russia’s case, in the meantime Belarus has been plunged into its biggest political crisis since Belarus' self-appointed President Alexander Lukashenko came to power 26 years ago and Russian interference in that story has again unnerved investors as more sanctions against Russia may be in the works.

Turkey is in the same boat, but for difference reasons. The government in Ankara has been battling to stave off yet another currency crisis, but now it has burned through an estimated $100bn of reserves and also tapped the banking sector for dollars it is starting to run out of ammo. Unlike the other EMs, investors into Turkey have been net sellers. As bne IntelliNews reported, Turkish equities saw the biggest outflow for more than 15 months in the middle of August, as a new crisis looms.

“Significant net sales of Turkish assets by non-residents over the past month reflect the growing threat of a currency crisis there. Selling pressure has been most acute in Turkish equities, although non-residents have also been net sellers of government bonds,” says Glossop. 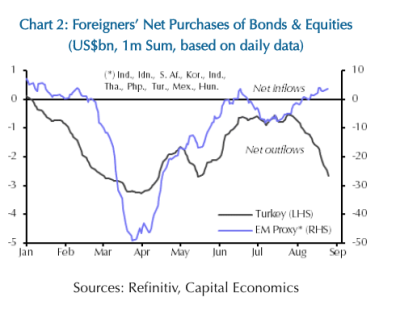 IIF’s tracker sheds a bit more light on the issue, saying that when factoring in all the variables the outflow from the Turkish market exceeds what would be expected from a crisis induced by the coronavirus epidemic alone, and that according to IIF’s models, the lira (TRY) remains overvalued, despite its recent deep devaluation.

Turkish nerves have eased a little in the last week after Turkish President Recep Tayyip Erdogan announced a large gas deposit find, but while the new source of energy will be a big boon for the country in the long term, it makes no difference in the short term. With dwindling reserves and Erdogan’s unorthodox fixation on low interest rates Glossop speculates that the central bank will impose capital controls before it will hike rates, which will only lead to more capital outflows.