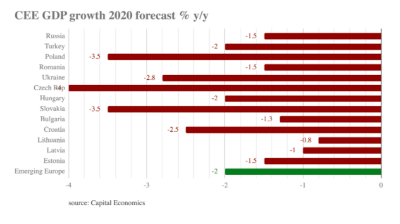 Capital Economics forecasts a 2% contraction in the CEE economies in 2020, down from the previous forecast of 2.3% growth
By bne IntelliNews March 25, 2020

Economic consultancy Capital Economics has slashed its growth forecast for the Central and Eastern Europe (CEE) to a 2% year-on-year contraction from the previous 2.3% expansion in 2020, as the coronavirus (COVID-19) epidemic in Europe gathers momentum and most countries go into lockdown.

“Countries across Emerging Europe have stepped up their efforts to contain the coronavirus outbreak over the past week or so and the economic damage will now be much more severe than we had previously thought. Output will decline sharply in Q2 and, even if the outbreak is brought under control soon, all economies in the region look set to contract over this year as a whole,” Jason Tuvey, the senior emerging markets economist at Capital Economics, said in a note.

As bne IntelliNews reports, the coronavirus epidemic is approaching the exponential growth stage in some CEE countries, as many European countries have squandered the warning they had from China’s experience and then Italy’s and are only now putting strict social distancing measures in place.

In Central Europe and Turkey the governments are edging closer to full lockdowns, while the Russian authorities have been more relaxed in their approach and ruled out a lockdown in the capital. However, Moscow mayor Sergey Sobyanin told Russian President Vladimir Putin on March 23 that Russia is facing a “serious situation” as the coronavirus spreads, adding that "the real number of those who are sick is much greater" than official numbers indicate. Russia had only 495 confirmed cases as of March 24, but the number of pneumonia cases has soared by 40% in the last month, according to reports.

These measures are already leading to severe disruption to economic activity and will continue to do so over the coming weeks and months, says Tuvey.

“Few timely indicators are available, but the ones we do have show that traffic congestion in major cities is well below average levels and cinema ticket sales have plunged,” Tuvey added.

The countries that are most exposed to the economic impact of the virus are those that have large retail and tourism sectors. That puts Croatia and Turkey, where tourism plays a significant role in GDP, in the front line, as social distancing will mean an entire tourism season is likely to be lost this year. Countires with large retail and leisure sectors are also going to be badly wounded.

“These sectors generally account for 20-30% of GDP across the region, with Romania the most exposed, followed closely by Latvia and Poland,” says Tuvey. “Meanwhile, tourism sectors are at a standstill and the hit will intensify if travel restrictions remain in place over the summer peak season. Turkey and Croatia are particularly vulnerable.”

At the other end of the spectrum, countries like Russia have only a small exposure to retail and tourism.

At a secondary level the collapse in external demand and supply chains will weigh heavily on export-oriented sectors, with automotive being one of the most exposed.

“We now expect the eurozone economy to contract by around 12.5% quarter on quarter in Q2, which be much larger than the 6% peak-to-trough fall in GDP during the global financial crisis,” says Tuvey. “The Central European economies, which are heavily integrated into German manufacturing supply chains, are most susceptible, with a number of car plants across the region having already halted operations.”

Capital Economics has produced a new set of forecasts for growth in New Europe this year, but Tuvey warns that "forecasting is extremely difficult in this environment and the impact may turn out to be much worse than even we expect, but once the virus is brought under control, we think that looser policy will set the stage for a relatively swift recovery.”

CEE dealmaking back at pre-COVID levels in H1, says Mergermarket

Slovak court says referendum on snap election would be unconstitutional