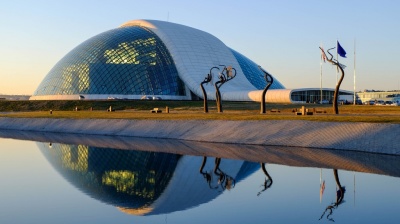 Most countries want to maintain good relations with their neighbours; small ones like the South Caucasus nation of Georgia even more so than larger, more self-sufficient ones. But just how far they are willing to go to sustain such relations differs from country to country.

Georgia has arguably recently shown that it was willing to go as far so as to sacrifice human rights and its good name as an emerging democracy for the sake of its special partnership with its dictatorial oil-rich neighbour Azerbaijan.

Afghan Mukhtarli, an Azerbaijani dissident who had fled the country and had been living in the Georgian capital of Tbilisi for two years, claims he was abducted on May 29 when he stepped outside to buy bread. A day later, he reappeared in Azerbaijan, where he had been detained for allegedly illegally crossing an international border and failing to declare $10,000 in cash he had on him.

The journalist, who had been investigating Azerbaijani President Ilham Aliyev's business interests in Georgia, denied the allegations through his lawyer, Elchin Sadigov. He says he had neither travel documents nor that amount of money on him when he left his house. Instead, he says, he was abducted by Georgian-speaking men, hooded, and transported to the Georgian-Azerbaijani border. He was beaten during transport, he says. Cars were changed twice during his kidnapping – the first two sets of kidnappers spoke Georgian, the last Azerbaijani, he claims.

The incident has caused an outcry in Georgia and internationally. Human rights and freedom of speech activists such as Reporters Without Borders urged Georgian authorities to explain just how such a kidnapping was possible in a country that aspires to one day join the EU. Nils Muiznieks, the Council of Europe's Commissioner for Human Rights, declared himself appalled at what had happened in a Facebook post on May 31. Georgian President Giorgi Margvelashvili, who has long been at odds with the ruling Georgian Dream party, called the event a violation of national sovereignty.

The opposition United National Movement called on the interior minister and the chief of the security services to resign. Meanwhile, the European Commission issued a statement on June 4 calling on Tbilisi to conduct a swift and transparent investigation into what had happened.

Georgian authorities have launched an investigation and, says Prime Minister Giorgi Kvirikashvili, people should wait for the results before jumping to conclusions and denigrating public institutions by accusing them of involvement in the abduction.

In a fiery Facebook message on May 31, Ghia Nodia, director of the Tbilisi-based International School of South Caucasus studies, said that the case was "a disgrace for Georgia and its current authorities. Bad as the fact is, the reaction of authorities, namely Minister of Security Vakhtang Gomelauri, is totally unacceptable: it is business as usual, the minister says, our Azerbaijani colleagues explained what has happened, investigation is under way, there is nothing to be upset about. In the best case, such statement reveals total political incompetence. Listening to this, the first thing that comes to mind is that it were the Georgian security services that abducted Mukhtarli and handed him over to Azerbaijan; they do not want to admit this, but do nothing to dispel this impression. In parallel, we read in the newsfeed self-congratulatory statements of other ministers saying that Georgia is more and more becoming part of the West. Such combination is a feature of political schizophrenia."

The Georgian government's complacent reaction to the incident has become a target of jokes, with people mocking authorities on and offline and joking that the border between the two countries has now moved to Tbilisi.

The company you keep

By the standards of the region, Georgia used to have a squeaky clean image when it came to democratic rights. While it has been hard to entirely eradicate Soviet-era practices such as illegally wiretapping political opponents and then using the recordings to discredit them, the country prides itself on its strong civil society, freedom of speech for most (though lesbians and gays may beg to differ) and free and fair elections.

However, as an investigation by Eurasianet conducted just before Mukhtarli's abduction took place revealed, Tbilisi had developed a pattern of denying residency to Azerbaijani dissidents.

As the human rights situation in Azerbaijan has deteriorated in recent years, journalists and other outspoken critics of the Aliyev government have increasingly fled to nearby Georgia. But, after Azerbaijani media reports accused Tbilisi of sheltering "enemies" of the Azerbaijani state, many dissidents have had their residency permits revoked, denied and some have even been denied an entrance into the country altogether.

Georgia’s dilemma is that while it has made strides toward European-style democracy since the Rose Revolution of 2003, it remains surrounded by countries that are gross human rights violators – Azerbaijan, Russia and Turkey. Ankara and Baku also happen to be Tbilisi's leading foreign investors and trade partners. How long can a small, energy-dependent country remain squeaky clean in such company?

Since Russia invaded the country in 2008, Tbilisi's formula for foreign policy could be summed up by "anyone who is not the Kremlin is our friend". In order to avoid Ukraine's predicament, Tbilisi took steps to overhaul its energy imports, and has managed to almost completely replace Russian gas, on which it was entirely dependent prior to 2008, with Azerbaijani gas. Since 2012, it has strengthened its ties with both Turkey and Azerbaijan by creating a "triangle" of commercial, security and diplomatic interests in the region.

The triumvirate has worked mostly to Georgia's favour thus far. In less than a decade, Azerbaijan has become the largest foreign investor in the country. Azeri state-owned oil company Socar is now the largest taxpayer, and transport schemes for freight and gas between Azerbaijan and Turkey via Georgia are expected to generate foreign receipts and position the country as a communications node in the region.

But juggling its regional interests with its Western orientation has proven tricky. And Mukhtarli's abduction is just one of those instances where Tbilisi seems to have failed to balance its neighbourhood with its more distant friends in Brussels.

Its close commercial ties with Azerbaijan are not a good enough excuse, Nodia argues. "The fact that Georgia depends on Azerbaijani oil and gas is not justification at all, even from the viewpoint of realpolitik. We need Azerbaijan, and Azerbaijan also needs us. Both countries need cooperation, but there should be red lines. At the very least, Georgia should respect its own sovereignty," he says in his Facebook post.

Georgia’s kowtowing to Azerbaijan is part of a pattern. Just a few days before Mukhtarli's abduction, a Tbilisi court decided to extradite the manager of a Turkish school in Tbilisi because he was suspected of links to FETO, the organisation founded by Muslim cleric Fethullah Gulen that has been outlawed as a terrorist organisation in Turkey. The school official now risks detention and possibly torture in Turkish jails, Amnesty International said in a statement.

Two days before the court's decision, Turkish Prime Minister Binali Yildirim had visited Tbilisi and exchanged niceties with Kvirikashvili during a joint press conference. Behind close doors, the topics of discussion were clearly not that nice.

Georgia’s stance also has serious implications for neighbouring Armenia. To celebrate the fifth anniversary of their triangular cooperation deal, the Georgian, Turkish and Azerbaijani defence ministers met in Tbilisi in late May. Little over a week later, the three countries launched joint military drills close to the Georgian capital that will continue for another two weeks.

While the drills have been packaged as military cooperation, the signal that they send to Armenia, Georgia's other neighbour and an archenemy of both Turkey's and Azerbaijan's, is unequivocal. With Armenia and Azerbaijan closer to war than ever in the last two decades over the enclave of Nagorno-Karabakh, the drills in Tbilisi are a clear message to Armenia that, should violence burst again, it is alone in the region and only has Russia to look after its interests.

Perhaps it is time for the young Georgian democracy to learn to stand up for itself better, and to protect those ideals that it claims to hold dear – democracy, freedom of speech – even when its commercial and geostrategic interests may contravene them. Otherwise, the country risks losing the international respect it has garnered through hard work, and becoming just another opaque human rights violator in a region that is replete with them.

CAUCASUS BLOG : What can Biden offer the Caucasus and Stans, all but forgotten about by Trump?
CAUCASUS BLOG: The long and illegal road to Stepanakert
CAUCASUS BLOG: Dismay as Armenia’s colour revolution PM Pashinian congratulates Lukashenko

Reflections from our correspondents on the ground in Armenia, Azerbaijan and Georgia.