Banks in Central, Eastern and Southeastern Europe have been plunged into one of their worst years since the international financial crisis of 2007-2008, says a new report from the European Investment Bank (EIB).
By Clare Nuttall in Glasgow June 15, 2020

Banks in Central, Eastern and Southeastern Europe have been plunged into one of their worst years since the international financial crisis of 2007-2008, says a new report from the European Investment Bank (EIB).

The region’s banks started the year in a relatively strong position, with easing credit standards and robust demand for loans, said the EIB, on the release of its latest CESEE Bank Lending Survey, a bi-annual survey of around 90 local banks, banking groups and financial institutions across the region.

However, after the coronavirus (COVID-19) pandemic spread across Europe and lockdowns were imposed, banking groups have drastically revised their expectations. They now anticipate the overall demand for financing to contract sharply, credit standards to tighten significantly and loan approval rates to decline. In addition, says the EIB report, as loan application quality decreases, non-performing loans (NPLs) are anticipated to rise for the first time since 2015.

“The COVID-19 shock has changed the expectations of banking groups in the CESEE region significantly. Higher uncertainty will persist over the coming months,” said EIB chief economist Debora Revoltella.

In a webinar hosted by the EIB on June 12, the lead author of the report Luca Gattini stressed the similarities of the pandemic’s impact on banking sectors across the region, and governments’ policy responses.

How the banking sectors entered the crisis in the various countries in this region from Poland to North Macedonia all had common components, though they were nuanced differently. All, by and large, had seen quite a robust demand for credit in the last two to three years, and all had also seen significant decreases in NPLs, he said.

Some countries’ banking sectors were stronger because they had exited the previous crisis in a stronger way, said Gattini, giving the example of Poland, whose banking sector was less weakened by the crisis than Romania’s. “Nonetheless, in the last few years there has been convergence,” Gattini added, “and this brought all the banks to enter the crisis in a rather healthy way.”

“When it comes to the exceptions today, frankly because this is really a common shock, hitting the region and the world, the expectations more or less changed simultaneously, but also similarly. Even the actions taken at the national level are very similar across the countries, showing how the challenges are the same across countries.”

This extends from the more advanced economies of Central Europe to the aspiring EU members in the Western Balkans.

“Essentially it seems the Western Balkans' banking sector is very much behaving in an aligned manner to the broader CEE banking sector. This is also a characteristic of the region per se, which sees a large presence of foreign banks that operate cross-border in 10+ countries of the region,” said Gattini. “The shock we have been facing and which is still unleashing its effect is a common demand and supply shock to the economy, including the banking sector, which by and large affects the whole region, including the Western Balkans.”

Data on loan growth rates shows a year-on-year increase in credit to the private sector of over 6% for the last seven quarters. The highest y/y growth rate in the region was in Hungary, at 13.2% in 4Q19 and above 10% since 4Q18. There had also been double-digit growth in Kosovo since 4Q16. In the final quarter with data provided, 4Q19, there was a regional average of 6.1% y/y and growth was above 5% in all countries except Croatia.

According to the report, banking groups operating in the region reported a continued rise in demand for loans in the last six months, and were expecting a further increase pre-pandemic. However, says the report, demand in the coming months is expected to drop sharply, with it driven more by households than corporates or SMEs. In addition, “the quality of loan applications is … expected to deteriorate sharply across the client spectrum,” according to the report. 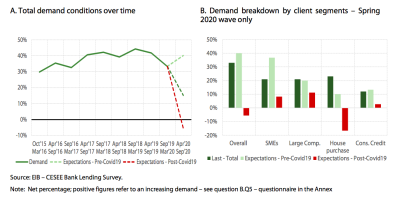 Looking at supply conditions for financing, the report notes that pre-pandemic banks in the region were mildly easing credit standards, which are now set to tighten sharply. “In addition to the local and international economic environment, non-performing loans, the quality of loan applications and local capital conditions are expected to exert significant negative pressure,” according to the EIB.

“Credit quality has continued to improve over the last six months. The positive trend is expected to invert dramatically.” adds the report, noting that the crisis has brought about a sharp reversal in expectations for the next six months, whereby the positive landscape has turned abruptly negative.

Just under two-thirds of banks surveyed, 64%, expect that the number of NPLs will increase going forward. 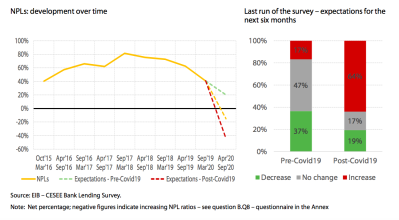 This follows a period during which NPL ratios were on a declining trend across the region, as banks dealt with the legacy of the previous crisis.

On a more positive note, EIB officials commented on the strong support for European businesses rolled out in response to the pandemic.

“The coronavirus pandemic is an unprecedented crisis. But co-ordinated action and support at a European level has [been] and will be unprecedented as well,” said EIB vice-president Lilyana Pavlova.

“In light of the grim expectations by the banking sector in the region and an increased likelihood of declining financing opportunities, we are particularly glad to have approved the pan-European Guarantee Fund. It is a timely and targeted response to alleviate the hardship endured, especially by entrepreneurs and smaller companies. We will work closely with national institutions to make sure that businesses in need can quickly access the support provided by the EIB.”

“For the banking sector to return to pre-crisis activity levels and to ensure financing for smaller companies and corporates, providing support through instruments like the European Guarantee Fund and others will be essential. They can support a faster and forceful rebound,” said Revoltella.