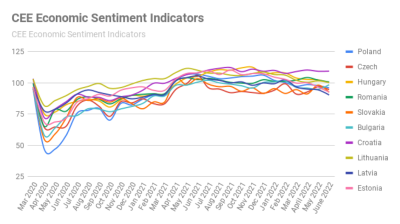 A string of crises has depressed sentiment across CEE, fuelled by soaring inflation, but the EC survey suggests inflationary pressure may be peaking / bne IntelliNews
By bne IntelliNews June 30, 2022

“The EC’s Economic Sentiment Indicators for Central and Eastern Europe showed broad-based declines in sentiment across the region and across sectors in June to levels not seen in a year,” Liam Peach, an emerging market economist with Capital Economics, said in a note. “Economic activity has generally held up well since the war in Ukraine started a few months ago, but the second half of this year is likely to be more challenging and we think economic recoveries will slow sharply.”

The constant stream of crises has depressed growth, starting with the global coronavirus (COVID-19) pandemic in 2020 that fuelled rapidly rising inflation. That was only made worse after Russia invaded Ukraine in February, sparking a food crisis after Ukraine’s grain exports were halted due to a Russian naval blockade. Stoking inflation, the World Bank is now warning the world faces stagflation unless central banks hike rates aggressively, as many have started to do.

On the back of this polycrisis, economic sentiment slid back in May in eight of the ten economies that Capital Economics covers. The sharpest falls were in Slovakia and the Baltic States, while there were modest increases in Bulgaria and Croatia.

“Our GDP-weighted measure for Central and Eastern Europe fell from 98.9 to 97.1, its lowest level since April last year and down markedly from its recent high of 120.0 in February,” Peach reports.

Spiking inflation is the main cause for deteriorating sentiment, and despite several rounds of rate hikes, most countries in the region currently have deeply negative real interest rates.

With more steep rate hikes on the cards, it is becoming increasingly likely that much of Europe will go into a recession in the next year, which is depressing sentiment. Sentiment in the services sector fell particularly sharply in the Central European economies of Slovakia, Hungary and Czechia, Capital Economics reports, while consumer confidence was weak across the board. The largest falls in consumer confidence were recorded in the Baltic States where confidence slumped to its lowest level since early 2010, again due to very high inflation.

Economies are already slowing, with the World Bank cutting its growth forecast for Europe almost in half to 2.9% in its latest macroeconomic outlook in June. Sentiment in the construction industry fell sharply in the region’s largest economies to levels not seen in more than a year in Poland, Hungary and Romania.

Industrial sentiment also fell to a seven-month low in Poland, where inflation has risen into double digits, levels not seen since the 1990s.

However, Capital Economics says the survey also suggests that price growth is peaking and may slow in the second half of this year.

“Firms’ selling price expectations in the industrial sector declined for the second consecutive month and they ticked down in the services sector (although they hit a fresh-record high in the retail sector). With global energy prices so high, goods shortages easing only slowly and strong wage growth feeding into firms’ costs, inflation pressures are likely to remain elevated well into 2023,” concluded Peach.

CPI inflation in Moldova hits 33.6% y/y in July
7 hours ago
How do high gas prices push up the cost of power?
15 hours ago
Russian inflation falls to 15.1% in July
15 hours ago
Russia’s current account surplus hits new all-time high of $166bn
19 hours ago
Poll shows every other Russian supports continuing the war against Ukraine
1 day ago