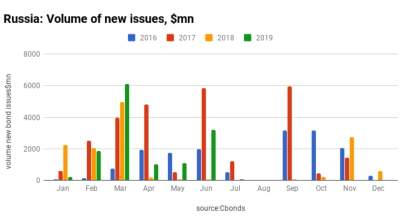 CEE bond markets ground to a halt over the summer with a total of five issues in the entire region.
By Ben Aris in Berlin September 5, 2019

Bond markets are always slow in the summer, but with Russia and Turkey, two of the biggest markets in the region, in turmoil over the summer, there were almost no bond issues at all this year.

Central Europe saw only one bond issue of $50mn, bringing the YTD total to $35.5bn, which is still ahead of the $27.9bn issued in the same eight months of last year.

In the Commonwealth of Independent States (CIS) a total of $34mn was issued, bringing the cumulative total for the year to date to $13.5bn, which is also ahead of the $9.6bn issued over the first eight months of last year. There were no other bonds issued in the CIS at all.

Most of the bond issues in Central Europe were issued in the first quarter with January, February, March, June and July accounting for well over three quarters of all the bond issues so far this year.

In the CIS the distribution is much more lopsided with January, March and July accounting for well over three quarters of the issues in the first eight months of this year.

Up-and-coming Russian brokerage BCS Global Markets is by far the most active bond issuer in the CIS and has been actively issuing almost every month, albeit small amounts of between $5mn and $10mn to fund its growing business.

If previous years are anything to go by then bond issues will restart in September but October has been the busier month in the last three years.

In Eastern Europe the performance in the autumn months is more erratic. In September 2017 Russia issued almost $6bn of bonds, but in the same month last year it issued almost none. Likewise, while Russia issued some $3.5bn in October 2016, in the next two years there were almost no bond issues that month.

The volumes of issues in Eastern Europe are still too small for a regular pattern to emerge and the sovereign issues make a big difference to the volumes. As the Russian Ministry of Finance is currently flush with money thanks to big Eurobond issues earlier this year and the popularity of its Ministry of Finance OFZ treasury bills, it is unlikely the Kremlin will come to market with another big Eurobond this autumn.

Wages in Romania grow in Q2
4 hours ago
Russia's GDP fell by 8.5% in 2Q20 due the lockdown quarantine measures
13 hours ago
Ukraine’s consumer inflation stayed at a 2.4% y/y level in July
20 hours ago
Romania’s exports continue recovering in June
1 day ago
ING analysts warn of L-shaped recession in Bulgaria
1 day ago