CEE monthly bond wrap: CIS bond market off to a strong start in 2020 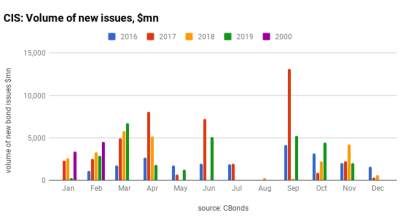 The Commonwealth of Independent States (CIS) had its strongest start to the year in the last five years with a total $3.3bn raised from 10 issues.
By Ben Aris in Berlin March 5, 2020

Bond markets in emerging Europe were off to a strong start in January but the impact of the coronavirus was already visible by February as bond issues began to drop off.

Central Europe issued $7.6bn worth of paper in 13 issues in January, the most issued in the first month of the year in the last five years. However, February saw the volume drop to $1.7bn with only two issues, the least in the last five years. The only bond of note issued in Central Europe in February was a €1.5bn note from Poland that matures in 2025.

The markets in Eastern Europe were a lot more active and the pandemic fears were still muted in February and the bond market unaffected. As the market sold off very heavily on the last day of the month it is likely that most of the impact from the virus fears will only appear in the March results which are likely to be subdued.

The Commonwealth of Independent States (CIS) had its strongest start to the year in the last five years with a total $3.3bn raised from 10 issues. That is well ahead of the $246mn raised the year before, $2.6bn raised in 2018 and $2.3bn raised in 2017, a vintage year for bond issues in the CIS.

The notable non-Russian issues in the CIS were a $500mn bond from Vodafone Ukraine that carries a 6.2% coupon and will mature in 2025, and a KZT62.5bn sovereign issue from the Development Bank of Kazakhstan that has a 10.75% coupon and will also mature in five years.

As usual most of the activity was from Russian companies with several bluechips coming to market. State-owned gas giant Gazprom raised $2bn with a bond that carries a 3.25% coupon that matures in 2030. Russian internet giant Yandex raised $1.25bn with a five-year note that has a 0.75% coupon. And steel pipemaker TMK raised $500mn with a seven-year bond with a coupon of 4.7%.

Czech industrial production down by 25% y/y in May, up 13.8% m/m
18 hours ago
Foreigners’ share at Borsa Istanbul falls below 50%
1 day ago
Albania’s annual CPI inflation slows to 1.8% in June
1 day ago
COVID-19 lockdown sends Hungary's industrial output back to 2013 levels
1 day ago
Russia’s Watcom Shopping Index regains three quarters of ground lost to coronacrisis
2 days ago