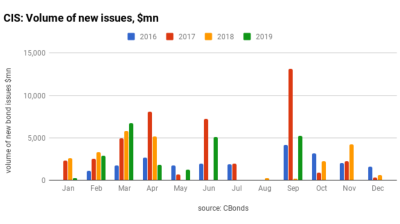 Bond markets in the Commonwealth of Independent States (CIS) had a strong month in September with a total of 19 Eurobond issues, while the summer doldrums spilled over from August in Central Europe where there were only two issues, reports CBonds.

After an unexciting August in Central Europe where only $50bn worth of bonds were issued, September was not much better with only two issues to raise a total of $708mn. That compares with the $2.5bn that was raised last year from five issues.

The quiet market means that Central Europe is slightly down on cumulative issues this year at $37.2bn from the $38.9bn that was issued in the first nine months of last year and even further behind the $40bn that issued in the same period in 2017.

However, things in Eastern Europe were a lot more active, as 19 issues in the CIS raised a total of $5.2bn. That result was well ahead of the mere $152mn that was raised in the same month a year earlier from five small issues, but still well down on the $13bn from 18 issues that was raised in 2017 in September, a vintage year for bond issuers.

In cumulative terms the busy September brought the total issued in the CIS this year to $23.3bn from a total of 91 issues, which is ahead of the $17.4bn from 54 issued in nine months of 2018. Indeed, the CIS has almost raised as much money in the first nine months of this year as it did in all of 2018. However, both these years are half of what raised in 2017 which finished the year with a total of $44.3bn, and $40.8bn over the first nine months alone.

Amongst the prominent bond issues in September was a Kazakh sovereign issue of €650mn that will mature in September 2034 and yields 1.5%. Armenia also issued a sovereign of $500mn that matures in 2029 and pays 3.95%.