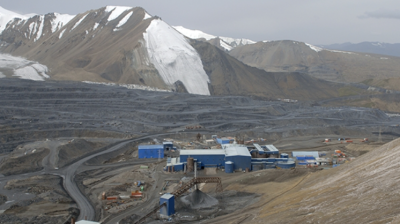 The mine is located at an altitude of 4,000 metres in the vicinity of glaciers in the Tian Shan mountains.
By Kanat Shaku in Almaty May 17, 2021

Canada's Centerra Gold on May 16 filed an international arbitration suit in an attempt at stopping the Kyrgyz government from taking further steps to nationalise the Kumtor gold mine.

The move came in response to Kyrgyzstan’s President Sadyr Japarov signing into law a bill opening the way to a state takeover of Kumtor and a $3bn fine for environmental damage issued by a Kyrgyz court. It is expected that Kyrgyzstan’s parliament will on May 17 appoint independent managers to run Kumtor for three months. The weekend saw Centerra Gold’s offices in the country raided, with documents seized.

It is not uncommon for new Kyrgyz governments to harass Kumtor's operator, while ignoring any agreements reached by the previous regime, but the current regime—consolidating around nationalist firebrand Japarov, who last year took the helm from toppled ex-president Sooranbai Jeenbekov after his supporters busted him out of prison—has moved swiftly and heavily against Centerra.

The Kumtor open pit mine, which produces over 500,000 ounces of gold per annum, is Kyrgyzstan’s single largest contributor to GDP. It accounts for approximately 5-7% of national output. The enterprise behind the mine, located at an altitude of 4,000 metres in the vicinity of glaciers in the Tian Shan mountains, also amounts to Kyrgyzstan's largest employer and taxpayer.

“The leadership of the Kyrgyz Republic has acted with astonishing speed since the beginning of this year to undermine the basis on which the Kumtor Mine has been operated and has refused to engage with us on any matters it considers to be the subject of dispute,” Scott Perry, chief executive of Toronto Stock Exchange and NYSE listed Centerra, said in a statement.

Bishkek has also hit Centerra’s subsidiary Kumtor Gold Company with a $170mn tax claim, a claim the company is disputing.

In a joint statement, Canada and the UK warned last week that measures that “negatively impact trade and foreign direct investment will further undermine already fragile economic livelihoods of the Kyrgyz people”.

Hit hard by the coronavirus pandemic, Kyrgyzstan became one of the first countries to apply for emergency funding from both the World Bank and the IMF.

“Kyrgyzstan is in a terrible economic situation, it totally depends on external support. And the international response will be harsh. If the funding stops, Kyrgyzstan will be in trouble. This country cannot afford to lose it,” the Financial Times quoted an anonymous foreign source working with the government and previously associated with Kumtor as saying.

Kyrgyzstan saw its GDP shrink by over 8% in 2020 amid the impact of the global pandemic and lockdown measures. It is the second poorest country in Central Asia, being only slightly better off than Tajikistan.

The European Bank for Reconstruction and Development (EBRD) in a statement released on May 16 expressed “deep concern” that the Kyrgyz parliament could decide to begin the process of a state takeover of Kumtor Gold Company.

“We believe that any such decision would put in doubt the commitment of the Kyrgyz Republic to stand by its obligations to its international partners and foreign investors. It risks the country’s economic recovery and its reputation as a secure place for investors to operate,” the EBRD said.

The EBRD said it would work with its shareholders, the foreign and domestic business community and other international financial institutions to highlight the negative consequences of Kyrgyzstan’s course of action and to mitigate its impact.

“The EBRD is committed to working with the Kyrgyz authorities on improving the business climate and investing to change people’s lives for the better,” the EBRD added.