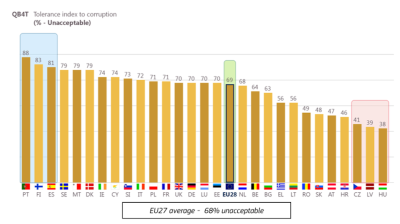 People from the new EU member states that joined from 2004 onwards – which include all of the former socialist countries – are more likely to think it is acceptable to do a favour, give a gift or give money to get something from a public administration or public service than their peers to the west, shows a new survey from Eurobarometer.

Based on an extensive survey of 27,498 people from across the union, Eurobarometer compiled an index showing tolerance to corruption. This revealed that the highest tolerance for corruption was in Hungary, where just 38% of respondents considered corruption – measured, for example, by views on offering bribes to officials – to be unacceptable.

Among the Eastern EU members, the only ones where tolerance for corruption was lower than the EU28 (the survey was carried out in December 2018 when the UK was still a member) average of 69% were Slovenia (73%), Poland (71%) and Estonia (70%).

Despite the regional difference, there were still an overwhelming majority of respondents that considered such actions unacceptable.

When it came to giving money, 21% of respondents from newer member states though it was acceptable, compared with 15% from the 15 older members. There was a similar difference between people from countries inside (14%) and outside the eurozone (21%).

Hungary and Slovakia were the only two member states where a majority of respondents considered it acceptable to do a favour to get something from a public administration or public service.

However, the share of respondents from several eastern EU members who consider this is never acceptable has increased since the October 2017 survey.

Likewise, a majority of respondents from Latvia, Hungary and Czechia believe it is acceptable to give a gift to get something from a public administration or public service. Again, the proportion of respondents who believe this is never acceptable increased in several countries, in particular Poland, Slovakia and Latvia.

26% of those surveyed said they are personally affected by corruption in their daily lives. This figure was highest in Romania, at 64%.

Russian banks extend profits in August, on track to earn a record RUB2.5 trillion this year
12 hours ago
Russia’s PPI inflation up 1.5% to 28.6% in August
1 day ago
Montenegro’s economy posts strong 19% y/y growth in 2Q21, higher than EU average
2 days ago
Russia’s Duma elections statistics: the comet effect and the Moscow blob
4 days ago
Romania and Latvia's car ownership rates among lowest in Europe
4 days ago