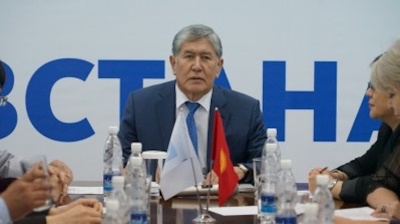 However the standoff between former Kyrgyz president Almazbek Atambayev and law enforcers ends, it will have wide-reaching consequences for the country, and is likely to add to the toxic political environment.

Atambayev is barricaded in his house outside Bishkek, having refused to obey a subpoena calling for him to report to the interior ministry in Bishkek for questioning as a “witness” in an unspecified criminal investigation, as reported by Azattyk.

Atambayev, who currently faces five counts of misconduct in office when he was president in 2011-2017, refused on the grounds that the authorities “first must fix their illegal decisions.”

Under Kyrgyz law, refusal to obey two subpoenas makes a person liable for forcible detention for questioning. Atambayev has barricaded his residence and openly warned the authorities that he is armed after lawmakers stripped him of his official ex-presidential status, removing his immunity from prosecution. Atambayev and his lawyer, Sergei Slesarev, deem amendments to the law adopted in May to strip Atambayev’s immunity as unconstitutional.

If Atambayev’s prosecution is successful, it would make the point that no one is above the law. On the other hand, the case could lead to an even more toxic political atmosphere in a country known for its political volatility. That might especially be true at the end of current President Sooranbai Jeenbekov’s term of office, when it will be his turn to step down and potentially experience some degree of paranoia that he will be pursued by his successor. This sets a precedent for future elected Kyrgyz presidents, who may see this threat as a reason to hold on to the seat of power past their constitutionally mandated single six-year term.

Kyrgyzstan has long been hailed an “island of democracy” in Central Asia, where dictators have a habit of holding onto power for decades. Kazakhstan and Uzbekistan saw their respective leaders rule for over a quarter of a century, from the collapse of the Soviet Union to the late 2010s. Turkmenistan changed leaders in 2006, but like in Uzbekistan in 2016, the power transition was a result of a dictator’s death and the current president has no plans to abandon his grip on power. Tajikistan has been ruled by the same president since the end of the Tajik civil war in 1997.

Kyrgyzstan became an exception to the rule after revolutions toppled the governments of Askar Akayev in 2005 and Kurmanbek Bakiyev in 2010.

Aside from Roza Otunbayeva, who served briefly as interim president after the revolution that toppled Bakiyev, Atambayev is the first president who explicitly made no attempt to hold on to power or at least did not succeed at it — his constitutional amendments and backing of Jeenbekov during the 2017 elections fueled widespread expectations that he would become a shadow ruler with Jeenbekov as his stooge.

However, the relationship of the two men took an antagonistic turn after Atambayev re-entered the limelight as head of the Social Democratic Party (SDPK) in 2018 and publicly criticised Jeenbekov for failing to deal with a major winter power outage. This prompted a struggle for influence over Kyrgyz politics and the SDPK along with a long-running crackdown on Atambayev’s allies and a rift within the party. The conflict eventually led to the signing into law of the bill to strip former presidents of immunity for “especially serious crimes” by Jeenbekov in May.

While all of Jeenbekov’s actions leading up to Atambayev’s current trapped state prove without a doubt that Atambayev held no chance of remaining as Kyrgyzstan’s grey cardinal, prosecuting Atambayev may make Kyrgyzstan even more politically unpredictable down the line.

CAUCASUS BLOG: But Mr Pashinian, Putin may not want the new “ancient Greece” on his doorstep…