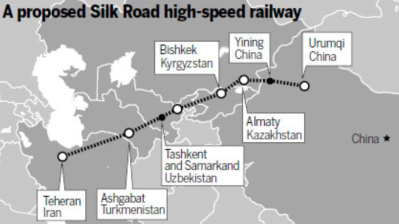 Over the years, the proposals for railways running out of China and through Central Asia to West Asia and South Asia have been near endless. Here's one published in the China Daily in 2015. / China Daily.
By Aida Kadyrzhanova in Almaty June 10, 2022

Cautious analysts will still not take it as read, but there’s another solid indication that construction of the China-Kyrgyzstan-Uzbekistan (CKU) railway really will commence in 2023, a quarter of a century after the infrastructure project was initiated.

China's National Development and Reform Commission announced on June 6 that work would soon begin on-site. The announcement followed a meeting attended by officials from China, Kyrgyzstan and Uzbekistan. 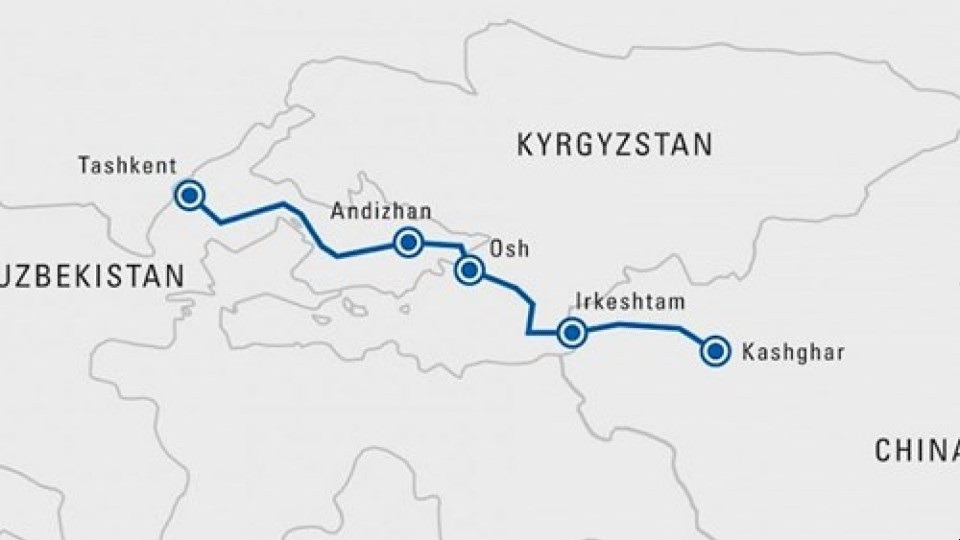 One proposed route for the CKU railway (Credit: Agency of Automobile, Water Transport, Weight and Dimension Control of Kyrgyzstan).

The railway is to be 523 kilometres in length, with 213 kilometres in China, 260 km in mountainous Kyrgyzstan (including around 90 tunnels!) and 50 km in Uzbekistan. It will cut the route from China to Europe and the Middle East by 900 kilometres, saving seven to eight days of travel time, say officials.

The route should stretch from Kashgar in China’s Xinjiang province to the city of Andijan in Uzbekistan via Kyrgyzstan’s Naryn and Osh oblasts.

As for financing, original projections stood at around the $2bn to $3bn mark, but this sum is estimated to have at least doubled.

After the demise of the Soviet Union, Central Asia inherited a railway network that in many cases left its newly independent states with transport infrastructure gravitating more towards Moscow than the rest of the region. The CKU railway opens up several options. It could, for instance, serve as the key segment in a ‘Central Corridor’ route connecting China with Iran, Turkey and Europe. The fact that companies dispatching cargo are wary of sending consignments through Russia—given the economic backlash against Moscow since it invaded Ukraine in late February and the danger of getting tangled up in sanctions or secondary sanctions—could well be one reason why the wheels now seem to be turning on the CKU initiative as companies seek alternative routes west from China.

Another angle to the project could be to open up a route for Uzbek and Kyrgyz exports to Pakistan (and beyond via Pakistan's Arabian Sea ports) via China, thus avoiding the security concerns of Afghanistan.

The project's long delays are ascribed to the three involved countries' inability to agree on the track gauge, route and, perhaps most importantly, the financing.

Among Bishkek's many concerns over the projected railway are the rising construction costs and what many see as the railway's limited local economic benefits for Kyrgyzstan.

There is always palpable anxiety among the Central Asian nations about Chinese debts owed to China. The region’s poorest nation, Tajikistan, and second most impoverished, Kyrgyzstan, have the most worries when it comes to assessing their ability in the future to repay borrowed Chinese monies. CKU looks likely to add significantly to the already substantial debt Kyrgyzstan owes to China. There is potentially the threat of a debt trap. In the worst-case scenario, high levels of indebtedness causing Kyrgyzstan to give up its share of the ownership of the railway would not only undermine Kyrgyz sovereignty, it would also jeopardise the government in Bishkek by adding to the perception that it is putting China's interests ahead of those of the Kyrgyz people.

Given that Chinese-funded infrastructure projects around the world typically contractually require the use of Chinese firms and labour, the Kyrgyz government will have to balance the expectations of Kyrgyz citizens for employment in the CKU project with the realities of doing business with Beijing.

The significance and merits of such transportation links, however, are clear in light of Uzbekistan and Kyrgyzstan's economic underdevelopment. Having enhanced transport links to the rest of the world could help to revitalise their struggling economies.