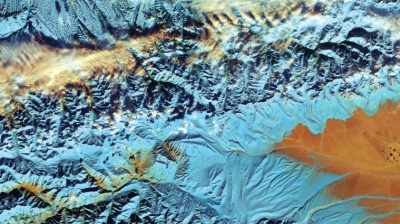 Part of the Tian Shan mountain range in northwestern China near the border with Kazakhstan and Kyrgyzstan as seen from ESA satellite Sentinel-2A. / European Space Agency, cc-by-sa 3.0
By David Trilling for Eurasianet January 18, 2023

After Central Asians were walloped by winter last week, many may find it hard to worry about too little snow. But that is a problem facing the region’s farmers and dam builders of the near future. Snow is an essential ingredient in the delicate annual cycle shaping seasonal river flows and thus food and electricity production.

While warming winters and shrinking glaciers have been obvious, and easy to measure, in Central Asia for decades, new data paint a fuller picture of what the future holds for these frozen reservoirs in the mountains. They are not only melting due to higher temperatures. Glaciers today are also being starved of replenishing snowfall each winter. Instead, precipitation is increasingly falling as rain, which further speeds melting as it flows across the ice and down into the valleys.

By the year 2100, the snowfall season in the Tian Shan mountains could be two months shorter, down from around five months today, modelling by Chinese scholars shows.

The Tian Shan range stretches from Uzbekistan, covering most of Kyrgyzstan, and into Kazakhstan and China, where it is the main source of fresh water in Xinjiang province.

Led by Xuemei Li of Lanzhou Jiaotong University, the researchers looked at temperature and precipitation data from 26 weather stations on the Chinese side of the Tian Shan between 1961 and 2020. With these figures they chart when the beginning of the snowfall season starts and ends, and how the dates are moving closer together, measuring what they call “snowfall phenology” – the rain-snow threshold, the potential snowfall season, and the observed snowfall season.

Already spring rain is replacing winter snow as much as 9.6 days earlier than in 1961; in the autumn, rain is turning to snow 6.6 days later. So, the snow season shrank by more than two weeks in the last six decades (2.8 days per decade).

Like most studies on the climate future, the authors model their predictions around four global warming scenarios (known as SSP126, SSP245, SSP370 and SSP585) designed by the Intergovernmental Panel on Climate Change. These range from optimistic (i.e., even if all countries keep their commitments to slash greenhouse gas emissions, which is vanishingly unlikely) to most devastating.

Under all scenarios, the season shrinks: “The potential snowfall season will start much later, end earlier, and last less time,” Li and her colleagues write in their December preprint article for The Cryosphere, a publication of the European Geosciences Union.

Were global mean temperatures to rise only 2 degrees Celsius (the SSP126 scenario), by the year 2100 the season would likely shorten by only another week. That figure rises steeply, however, with the increasingly dire scenarios: Under the most extreme (SSP585), it drops another six and a half days per decade – another two months shorter than today.

Thus, snow could stop falling before Valentine’s Day in 2100. Li and her colleagues estimate annual snow volume under this scenario to decrease by 26.5%.

While snow is one ingredient for glaciers, the other is cold – sorely lacking as human activity warms the planet.

A comprehensive study of glaciers published this month in Science found melting in Central Asia will peak between 2035 and 2055 – well within the lifetime of giant hydropower projects currently in the planning stages. After that, the amount of water the glaciers give off each summer – historically, a predictable pattern important for hydropower and farming – will dwindle steadily.

The Science paper confirms Central Asia’s glaciers are melting faster than the global average and could lose up to 75% of their 2015 mass by the year 2100.

Together, the two papers are yet more evidence that future water patterns in Central Asia will change significantly, impacting agriculture, electricity generation and all those who consume the fruit of both.

Hundreds of protesters currently trying to halt the continued development of a coal mine in Germany – which would involve the destruction of the now abandoned village of Lützerath – are putting pressure on the government to phase out coal use.