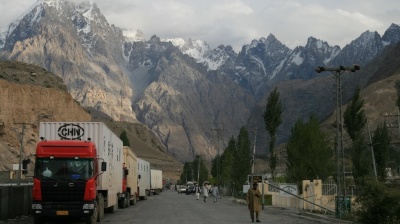 Freight truckers still run the show when it comes to Chinese goods heading into Kyrgyzstan.
By Emil Avdaliani in Tbilisi August 15, 2020

Despite the pandemic, China’s recent moves in Central Asia indicate it harbours growing ambitions in a region that it sees as playing a jumpstart role for its multi-continental Belt and Road Initiative (BRI) for modern infrastructure that expands trade and investment.

In early June, China unveiled a new transportation corridor running through to Uzbekistan, via Kyrgyzstan. A freight train left the Chinese city of Lanzhou for the Uzbek capital of Tashkent, carrying some 230 tonnes of electrical appliances valued at $2.6mn. On the return journey, it was to bring back $1mn of Uzbek cotton. Initially, the corridor was to only involve a railway, but due to unending construction delays in Kyrgyzstan, China and Uzbekistan agreed on a rail-to-road-to-rail line. Goods departing from China reach Kyrgyzstan, where they are unloaded, before being trucked to Uzbekistan where they are once more loaded onto a train to facilitate the final journey to Tashkent.

China for decades held unsuccessful negotiations with successive governments in Bishkek for the construction of the near-400-kilometre Kyrgyzstan section of the railway link. But the generally unstable situation in the country, its poor economic performance and, not least, Kyrgyz nationalistic sentiment against the growing presence of the Chinese in Kyrgyzstan’s economy meant the railway project was perpetually postponed. 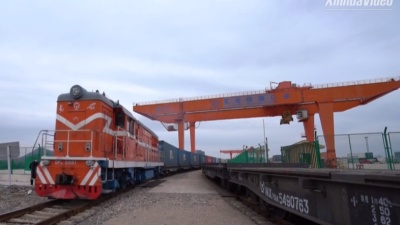 As things stand, Uzbekistan-bound Chinese goods arriving on freight trains at the Kyrgyz border must be loaded on to trucks (Image: gov.cn).

For Kyrgyzstan, Chinese investment in the construction of the railway would by some estimates increase its rail transportation by up to 30%. The China-Kyrgyzstan-Uzbekistan railway would also shorten the time required to transport goods between the three countries. Moreover, an attraction for Bishkek would be that the railway would be key in enabling the country’s goods to reach Europe while bypassing Russia.

‘Bigger picture’ Eurasian geopolitics could have been the real driver behind Bishkek’s continuous postponements of the rail link section. It is believed that Russia is against the initiative. Indeed, for centuries a lack of connectivity in Central Asia has served Russia's purposes. Major roads, railroads and pipelines in Central Asia have been directed northwards to Russia. If this unfortunate geography was broken, it would mean a notable decrease in Russia’s influence in the region. The new corridor would thus offer leverage for China to get itself more deeply involved in the economies of Central Asia and specifically in big player Uzbekistan, the most populous of the Stans.

Projections show just how disadvantaged Russia would be should the full railway corridor be realised. The complete corridor would likely mean China sending at least 10-15% fewer products through the Kazakh-Russian route. Geography too is crucial here. The new corridor is shorter by some 300 kilometres than the Kazakh-Russian route, potentially knocking days off delivery time and making it the best option for reaching Europe from Xinjiang.

More importantly, the new corridor could have implications beyond Central Asia. Consider the following. Chinese goods could use the Turkmenistan/Afghanistan route to reach Iran, then Turkey and the Mediterranean. This could be especially doable if China and Iran complete negotiations over an envisaged mammoth 25-year trade and economic cooperation treaty in which Beijing makes massive investments in Iran in return for attractive discounts on large volumes of oil. Still, the unreliability of transit through Afghanistan and Turkmenistan makes the Caspian route via Azerbaijan and Georgia a much likelier scenario.

Repercussions for the West

Repercussions for the West of that route could be large: there could be a reinvigoration of Trans-Caspian shipping. The inland sea in recent years has seen a significant improvement in its ports infrastructure, particularly in Azerbaijan. Talks on building the dormant Trans-Caspian Pipeline (TCP) between Turkmenistan and Azerbaijan, regarded by the West as opening up alternatives to piped Russian gas, could again resurface.

Improved infrastructure in Central Asia will serve as a powerful building block for the fragile South Caucasus transport and energy corridor. Always limited because of other competing major trade routes between Asia and Europe, the route needs to better position itself between the two economic superpowers. As it would likely make China redirect some trade from the Russia-Kazakhstan route, it would serve as a necessary boost for the South Caucasus corridor to expand and perhaps bring larger investment in Georgia’s Black Sea ports.

The expansion of trade corridors of course fits neatly into the rising presence of Chinese influence in Central Asia. As another instance exemplifying this trend, the foreign ministers of China, Kazakhstan, Tajikistan, Turkmenistan, Kyrgyzstan and Uzbekistan convened via video conference in the “5+1” format on July 16. Issues such as China-Central Asia relations, economic growth and the political situation in volatile Afghanistan were discussed.

On a wider geopolitical level, the border dispute between India and China, as well as China’s relationship with the US and the European Union were touched upon. What might seem to many observers to be an ordinary gathering, could come to be regarded as a format that offers an important milestone as purely economic contacts are transformed into politico-economic relations.

Though the Kyrgyz section of the rail link is still to be negotiated and built, Chinese moves in this area are nevertheless bound to increase tensions with Russia. Moscow would likely again be careful in avoiding open discussion of the issue as competition with the US, and support from Beijing, far outweigh the difficulties in Central Asia. Eventually, however, Russia’s geopolitical calculus in the region will adapt to the new reality.

Disasters in the making
COMMENT: Why Belarus is exceptional
Lukashenko appears alongside “dead” ex-Kyrgyz PM after protests

TURKEY INSIGHT: Mystery on the bourse as traders ask "Who bought the banks?"
1 day ago
COMMENT: Don’t disregard potential for Armenia and Azerbaijan’s war to spiral into something much bigger
1 day ago
TURKEY INSIGHT: Moody’s warns of autumn peril
7 days ago
MITTELEUROPEAN INSIGHTS: Better $1.5bn from Russia or €1bn from the EU in the hand than $15-20bn in the bush?
7 days ago
COMMENT: Ukraine’s the Old Rotten System is alive and well
11 days ago