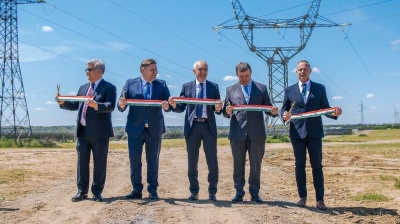 Solar energy will be key for Hungary to become a carbon-neutral country by 2050.
By Tamas Szilagyi in Budapest May 28, 2021

China National Machinery Import and Export Corporation (CMC) inaugurated a 100Mw solar park on May 27, the largest in Central Europe and four times bigger than the former number one solar park in Hungary built by Israeli Enlight Renewable Energy in 2020. The project’s value is HUF36bn (€103mn)

The investment carried out in Kaposvar, southwest Hungary will lift Hungary’s solar power capacity of 2,300Mw at present by 5%. The increase in photovoltaic capacity equals the total annual energy demand of 65,000 people and will eliminate 120,000 tonnes of carbon dioxide emissions.

"The solar park will contribute to developing a well-balanced and sustainable energy mix in Hungary and guarantee the country’s energy security," Minister of Innovation and Technology Laszlo Palkovics said at the ceremony.

He recalled that Hungary has pledged to become a carbon-neutral country by 2050, reducing its carbon emissions by 95% compared to 1990 levels.

Hungary’s National Energy Strategy envisages 90% of domestic electricity production to be carbon-free by 2030. At present 60% of electricity is produced by solar or nuclear energy, the two pillars of the country’s energy strategy.

CMC picked Hungary for the investment in 2016 and is planning to invest €1bn in the country, chairman Kang Hubia said in a video message.