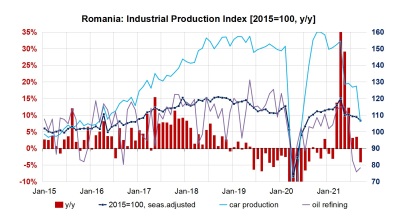 Romania’s industrial activity lost ground in the second and third quarters of this year since it peaked in April, plunging to levels not seen since 2016, dragged down by weak automobile production. The oil refining industry also contributed to the weak performance, after the country’s biggest refinery suspended operations in July.

Romania’s seasonally-adjusted industrial production index plunged by 4.6% in the third quarter of the year (-5.4% q/q for the core manufacturing sectors), dropping for the second quarter in a row after it had fully recovered from the lockdown in the last quarter of 2020 and continued rising in Q1 this year. The industrial output in Q3 was the weakest since the end of 2016, not counting the activity hiatus last year.

Automobile production, hit by the semiconductors crisis, is largely responsible for the steep slowdown. Petromidia refinery suspending operations after the July accident resulted in weaker oil processing activity as well. In Q3, automobile production contracted by 12.6% q/q (seasonally adjusted) and by 17.2% compared to the same period of 2019 (gross terms). Oil processing in Q3 plunged by 30% compared to both Q2 and the same period of 2019.

On the other hand, tobacco processing and production of electronics and rubber goods have demonstrated resilience, as has the production of construction materials and metallic constructions, which, however, showed signs of fatigue in the third quarter.

Notably, the slowdown in automobile production and oil processing made a negative impact on the country’s foreign trade deficit (+38% y/y).

In gross terms, the industrial output marked a slim 0.6% y/y advance in Q3, thanks to the utility sector (+9.2% y/y) while the core manufacturing industries edged down by 0.5% y/y and the mining sector saw an even steeper (-2.5% y/y) contraction. Compared to the third quarter of 2019, the industrial output still lags by 2.8% (3.9% for the core manufacturing industries).

Except for automobile production (-17.2%) and oil processing (-31%), the toughest hit industries compared to 2019 were those in the light industries, in particular clothing and footwear production.