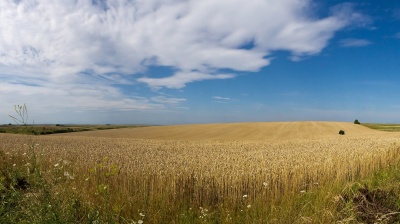 In a normal year, Ukraine is the world's fourth-largest exporter of wheat. / © Raimond Spekking/CC-BY-SA 4.0 via Wiki Commons.
By bne IntelIiNews June 9, 2022

Ankara risks incurring the ire of Kyiv if claims that Russia has started sending grain from occupied areas of Ukraine to Turkey and the Middle East via Crimea prove correct.

Yevgeny Balitsky, who heads the Moscow-installed military-civilian administration in the occupied areas of Zaporizhzhia in southeastern Ukraine, told Russia’s Rossiya 24 news channel: “We are sending grain through Russia, and primary contracts are signed with Turkey. The first trains have departed through Crimea for the Middle East.”

Balitsky was vague on which Middle Eastern countries were allegedly being supplied with the wheat, only stating: “It was a traditional market for Ukraine.”

Turkey is in something of a unique position in the Ukraine conflict in that it is a Black Sea neighbour of Ukraine and Russia that is on amicable terms with both Kyiv and Moscow. The two foes tolerate this fact, as it makes Nato member Turkey a third country that can serve as an acceptable mediator in the pursuit of peace.

Tens of millions of people around the world who face possible famine if Ukraine – the world’s fourth-largest exporter of wheat – cannot get most of its wheat harvest to the international market are now also counting on Turkey to arrange a deal whereby Ukraine, despite the Russian military blockade of its ports, will be able to ship its grain consignments.

However, Turkey’s approach to the issue could start to grate with the Ukrainians if it is seen to be sewing up a deal with Russia without fully consulting with Kyiv. Prior to the arrival of Russian Foreign Minister Sergey Lavrov in Turkey for June 8 talks on arranging a deal for the shipping of Ukraine’s wheat – talks that Ukraine was not invited to – there was a wave of indignation on social media after speculation mounted that Turkey was asking Ukraine for a discount on wheat supplies. Ankara has also had to bat away claims that Turkish companies have received Ukrainian grain stolen as spoils of war.

To get most of its wheat to global markets, Ukraine most particularly needs Russia to lift its blockade on the port of Odesa – but that still leaves the problem of mines. Moscow says Ukraine, perhaps with the assistance of Turkish minesweepers, needs to de-mine Black Sea shipping lanes to allow cargo ships carrying grain safe passage. But Ukraine, so far, is having none of it. "The moment we clear access to the port of Odesa, the Russian fleet will be there," Serhiy Bratchuk, a spokesman for the Odesa regional government, was quoted as saying by DW on June 8.

Lavrov said after his talks in Turkey that Moscow was prepared to provide guarantees “in some way or other” that it would “not take advantage of the situation” if Ukraine cleared a path to its ports.

Kyiv is looking at sourcing more western surface-to-ship missiles to protect its coastline and the possibility of export routes being patrolled by a third-party navy, perhaps Turkey’s.

“We need enough weapons to protect Odesa and this part of the Black Sea coast,” Ukrainian Foreign Minister Dmytro Kuleba said in a briefing on June 8. “And we need a clear mission from countries we can trust to patrol this channel through which grain shipments will occur. In this respect, we can trust Turkey’s naval forces.”

While a deal remains undone, the suspicion will remain that Russia will not budge on allowing Ukrainian wheat shipments until the West provides it with some sanctions relief.

Dmitry Peskov, Russian President Vladimir Putin’s spokesman, told the Financial Times on June 8 that it was “totally untrue that Russia is against exporting grain from Ukrainian ports”. He also referred to how Russia wanted the lifting of sanctions against shipping insurance for its own exports, access to EU ports for the exports and transactions that enable buyers to pay for the shipments. “We’re not going to supply it for free,” he said.

Russia and Ukraine produce close to a third of the world’s traded wheat and barley, a fifth of its maize and over half of its sunflower oil.

Government claims three quarters of foreign companies in Russia are still working
12 hours ago
Moldova says it won't be able to make next payment to Gazprom
13 hours ago
Russia resumes oil supplies to Slovakia and Hungary but imports to Czechia remain halted
13 hours ago
US charges Iran operative with plotting to kill former Trump hawk John Bolton
21 hours ago
Ukraine will receive $5.5bn in support from the US later this month
1 day ago