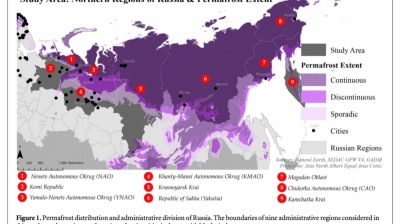 Russia has 24 regions that are permanently frozen, nine of which are home to people and mines. The melting permafrost could do $99bn worth of damage to buildings and crucial infrastructure in these regions / WIKI
By Ben Aris in Berlin December 1, 2020

Climate change will cost Russia RUB9 trillion ($99bn) due to direct damage to buildings and infrastructure, says Deputy Minister of the Far East and Arctic Aleksandr Krutikov, the Barents Observer reported on November 30.

While some regions will actually see their economies improve as temperatures rise, the melting of the permafrost in Russia’s frozen hinterland will do widespread damage to buildings and crucial infrastructure, including the thousands of kilometres of oil and gas pipelines that criss-cross the country.

And the average Russian is slowly waking up to the problems created by the changing climate, having suffered a year of freakish weather conditions.

The climate crisis arrived in Russia this summer with an unprecedented heatwave that baked Siberia and Yakutia – two of the coldest places on earth – with sizzling 45C temperatures. This summer has turned into the hottest since record-keeping began, as towns that are usually still blanketed by snow are experiencing a blazing heat wave, thanks to the escalating climate crisis.

On top of this summer’s heat wave, last winter saw no snow fall in Moscow until December, almost unheard of, as the snows usually come in November at the latest. Most recently, the Far East has suffered from “ice rain”, where rain instant freezes to anything it falls on, bring down trees and telegraph poles as the ice weighs down branches and wires.

The poll revealed that just 4% of surveyed citizens think the environmental situation in the world and in Russia is “very good”, while around a third (34%) of those asked in October reported that the situation has worsened in their local area.

When it comes to the government’s role, 48% of respondents believe environmental protection is one of the most important tasks of the state, with a majority (56%) of those over 65 supporting this statement. The age group least likely to agree is people aged between 25 and 34, at just 38%.

Temperatures in north-eastern Russia are rising two and half times faster than in the rest of the world. Few people live there but if Russia’s permafrost melts the economic cost could be astronomical.

Deputy Minister Krutikov made a rare call on the government to tackle the mounting climate crisis that is threatening some of the largest uninhabited tracts of land on the planet.

The direct damage inflicted on installations in the region could amount to RUB9 trillion (€99bn), he warned in an assessment of the damage.

“The most optimistic prognosis, with marginal warming, is RUB2 trillion by 2050, while the most extreme damage, if the intensity of the warming increases, will amount to RUB9 trillion by 2050,” he said in a recent meeting in the Russian Federation Council.

The estimates are based on anticipated damage on buildings and infrastructure, he explained, underlining that the numbers are provided by researchers.

Russia has 24 regions that are permanently frozen but only nine of those contain extensive infrastructure and cities. However, these regions are key to Russia’s economy, producing the bulk of its raw materials that account for almost half of the country’s GDP.

As bne IntelliNews reported in “Russia’s permafrost is melting”, a separate study by Dmitry Streletskiy on the impact of climate change on the fixed assets puts the estimates of the cost of the damage even higher, at RUB19 trillion ($250bn).

Streletskiy estimates the total value of all fixed assets in danger from the melting permafrost – buildings, factories, pipelines, roads, etc. – in just the nine most at risk regions is an astronomical RUB100 trillion ($1.29 trillion), almost three quarters of the value of Russia’s entire GDP.  Of these assets, about a sixth are in immediate danger from the subsidence of the ground if it melts, or just over RUB19 trillion ($250bn) worth, around 7.5% of Russia’s GDP.

And the cities are in more danger than the pipelines: in the coming decades about a fifth of this infrastructure and up to half of the housing in the permafrost regions need to be upgraded or rebuilt entirely, the study found.

The bottom line is that the worst affected regions will have to spend between 4% and 5% of their gross regional product on repairs and upgrades and the permafrost meltdown will shave another 1%-2% off Russia’s economic growth for decades to come.

Belatedly the Russian government is starting to respond to the threat. Krutikov and the Ministry of the Far East and Arctic are currently in the process of elaborating a federal plan on Arctic climate change adaptation. A group of 36 leading researchers in the field are involved in the work and the plan will be presented in the course of December, TASS reports.

The Ministry of the Far East and Arctic is also involved in the making of a state environmental monitoring system for the Arctic, which is part of the new Arctic strategy to massively exploit raw materials found in the Arctic region launched in October.

Krutikov said there is a need for many more monitoring stations across the Arctic in addition to the existing 430 hydrological units currently deployed in the region.

According to Russian meteorological service Roshydromet, it is the Kara Sea and nearby areas of Taymyr and Yamal that now is the region with the quickest warming.

It has been the northern parts of the Taymyr Peninsula this year have experienced the biggest temperature deviation. Maps presented by Roshydromet show that the areas adjacent to Dikson, the local town in Taymyr, in summer were more than five degrees warmer than normal.

And the first serious accidents have already occurred from the melting permafrost. The Kremlin has declared a spill of diesel fuel at the power plant of Norilsk Nickel metals major in the Krasnoyarsk region in June as a federal emergency. The spill dumped millions of tonnes of oil into the delicate northern eco system and has been declared Russia’s worst ever environmental accident. The spill is believed to have been caused by the permafrost under pipelines melting, causing them to fracture. More recently, in November Russian watchdog Rostekhnadzor has ruled out permafrost melting as the cause of Norilsk Nickel Arctic diesel fuel spills, blaming negligence by the company as the cause.

And in June a once-in-a-1,000 year snow melt flooded the TGK1 power station near Murmansk, putting two of its hydropower units out of action after they went underwater because of “abnormal water inflow” due to melting snow at a nearby lake. No one was injured and the facility suffered no material damage, but the accident was a wake-up call for the authorities.

As bne IntelliNews  reported in “the Cost of Carbon in Russia”, Russia ratified the Paris Climate Accord on September 23, committing itself to reducing CO2 emissions to 70% of the 1990 levels. Massive forests and investment into improving energy efficiency have left Russia in a strong position to reduce CO2, but it has set itself a low bar to clear, and the initial suggestions to reduce emissions were watered down after the Kremlin met with the Russian Union of Industrialists and Entrepreneurs (RSPP) lobby group for Russian big business.