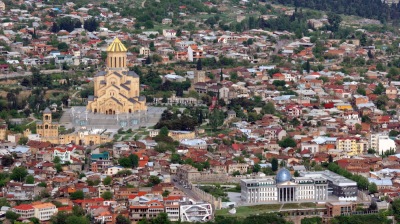 Georgia leads the Caucasus region in successfully responding to the coronavirus
By Alexander Scrivener of the the Eurasia Democratic Security Network March 22, 2020

When the biggest health crisis in a century hits, where would you prefer to be: the Netherlands or Georgia?

Until very recently, almost no one would name the South Caucasus country as their choice. Even the most patriotic Kartveli would admit that having the money, facilities and expertise of a very high income west-European nation would put the Dutch in a much better position to prevent and mitigate the spread of a pandemic. Indeed, the Netherlands came 3rd in the latest Global Health Security Index which measures preparedness for disease outbreak. In that index, Georgia comes a creditable but not earth-shattering 42nd.

The reality of the two countries’ response to the novel coronavirus, however, shows that being rich doesn’t guarantee effective policy in a time of crisis. If anything, the early signs are that wealthier European countries have tended to respond less effectively than poorer ones - at least initially.

Georgia and the Netherlands are a good comparison as both confirmed their first cases at roughly the same time - Georgia’s first case was a day earlier. At the time of writing, the death toll in Georgia stands at zero, with just 43 confirmed cases, all imported or directly related to imported cases. In the Netherlands, 106 have died and, despite very narrow access to testing, there are 2994 confirmed cases. The Dutch government now considers the outbreak to be unstoppable and has essentially given up on fully supressing the virus.

Of course, the Netherlands is a far more connected economy and as such a faster increase in imported cases would be expected. But the fact that both countries saw the virus arrive at the same time suggests that this does not account for the huge gap in outcomes. Nor are differential test-rates a possible explanation, as the Netherlands conducted extremely limited testing until relatively late. In fact, the death statistics (which are far more reliable) suggest that the real number of Dutch cases is in the tens of thousands, while Georgia is likely still in double figures.

A look at the way the two countries responded to the outbreak gives us a clue about why there has been such a difference in outcome.

Early in the crisis, Georgia took strong measures to prevent and detect imported cases. They not only checked the temperatures of all arrivals but gave out clear information and contact details in case they started experiencing symptoms. These were sufficiently effective that the first Georgian case was identified at the border. They moved fast to limit travel from known hotspots at huge cost to Georgia’s booming tourist industry and generally took proactive measures such as improving hygiene in public areas much earlier than in many Western countries. The government also set up a dedicated website and gave regular and clear briefings to the public which reflected international scientific opinion and World Health Organisation recommendations. For a culture as famously feast-loving and touchy-feely as Georgia’s, social distancing does not come naturally. But fear of the disease quickly led to widespread behavioural change. As the crisis escalated in the rest of Europe, Georgia closed its borders and implemented strong social distancing measures, closing all restaurants, bars and shops apart from grocery stores, banks, petrol stations, pharmacies and post offices. Today, all international air traffic was halted with the exception of a few official government flights. All this has happened in a country which (at the time of writing) has not seen a single coronavirus death.

By contrast, the Netherlands’ reaction was highly complacent. Almost no measures were taken, even as the first cases began being confirmed. Business as usual was king. Preventing “panic” (which there was no evidence of) was prioritised over actually combating the virus. Dutch authorities initially claimed that the chance of the coronavirus arriving in the Netherlands was “zero” because there are no direct flights from Wuhan. Very few tests were conducted until the first case was confirmed. But even as the number of cases began to rise, the Dutch government failed to take meaningful action. Dutch citizens were told that the virus “didn’t seem to be highly contagious” and that there was no need to increase sanitisation on public transport as the virus did not transmit easily via surfaces. The prime minister, Mark Rutte, proudly underlined that the Dutch were a “down-to-earth nation” not inclined to fall into the panic that afflicted other nations. When a childcare facility was found to harbour an infection, the authorities claimed there was no need to close it down (though the management of the facility did unilaterally). Only when the deaths started mounting did the government begin to act and introduce, largely voluntary, social distancing. Addressing the nation, Prime Minister Rutte then endorsed a plan of achieving “herd immunity” by allowing the majority of the country to become infected, albeit in a managed way. A similar plan was hurriedly abandoned by the UK government the next day when a major study revealed that it would lead to millions of deaths globally.

A thousand doctoral theses will inevitably be defended on the subject of explaining differential responses to the coronavirus crisis. And there are inevitably a multiplicity of institutional, cultural and political factors in play. But there is a pattern emerging that transcends continents, wealth levels or political context that is worth highlighting. Societies with recent memory of major societal crisis and upheaval are responding much more proactively than those that lack such collective memory. What links the Asian countries that have so effectively contained the virus, post-Communist states like Georgia and austerity-battered southern European countries like Greece is recent memory of crisis. In the case of places like Singapore or South Korea, the specific memory of SARS obviously looms large. But Georgia, Lebanon and Greece alike were all among the more proactive responders in their respective regions. Conversely, countries that have enjoyed relative calm and prosperity, even in the wake of the 2008 crash, like the Netherlands, UK and USA, were notably slow to even recognise the threat. In these countries, acute societal crisis has long been something that happens to other people. Much of the discourse in these places has been about the potential damage to the economy that would result from taking drastic measures. In the pubs of London and along the canals of Amsterdam, the idea that the virus could cause something worse than lost economic growth seemed, until recently, unthinkable.

So is it completely outlandish therefore to ask whether the societal immune system of collective historical experience is as important as the biological immune system of the individual in effectively combating this pandemic? Can we partly explain the lackadaisical reaction of countries like the Netherlands with their lack of “antibodies” against acute societal crisis? Did the civil strife and severe shortages that afflicted Georgia in the 1990s help create a political culture that was better equipped to take decisive action even at huge economic cost? Huge economic costs, it should be highlighted, that the country’s largely poor population can ill afford compared to the well-heeled burghers of Amsterdam or Utrecht.

NEMETHY: Is monetary tightening the cure for inflation?
5 hours ago
ASH: Russia escalation cost/benefit
2 days ago
HOMANS: Former President Petro Poroshenko in the dock (sort of)
8 days ago
RIMMER: Turkey - Let nothing astonish you
8 days ago
FPRI BMB Ukraine: Ukraine’s military better at fighting
9 days ago