COMMENT: Are the foreign fighters in Ukraine propaganda tools or effective combatants? 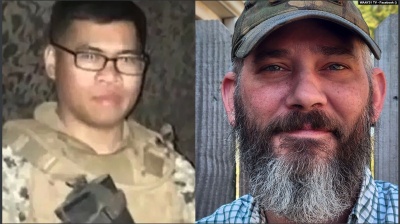 After Ukraine announced it was setting up the International Brigade, over 20,000 foreigners signed up or said they wanted to fight. But with one aid worker in Russian custody dead and at least three more on death row, how effective have these fighters been? / wiki
By Naman Karl-Thomas Habtom in Cambridge July 22, 2022

A few days after Russian forces entered Ukraine, President Volodymyr Zelenskiy announced the formation of the Ukrainian International Legion and waived visa requirements for volunteers that were prepared to take arms. Within a week, 20,000 foreigners had signed up or expressed interest in joining the fight, according to Ukrainian officials. Months later, however, there has been little to show for what was initially touted as a major effort to unite citizens from across the world behind the Ukrainian cause. Meanwhile, the unintended consequences of their recruitment are yet to be reckoned with.

Ostensibly, the purpose of the Legion was to provide Ukrainian forces with needed experience. While this may have been part of the motivation, the larger ambition has been to mobilise global, and especially Western, public opinion on the side of Kyiv against Moscow. Public opinion polls from across the West, along with the willingness of European governments to accept Ukrainian refugees and impose anti-Russian sanctions, suggest that this goal has been successful in large parts, but likely not due to foreign fighters. Though the Legion attracted a lot of attention, and has received disproportionate media coverage that is usually sympathetic, this was not sustained. A few weeks following the announcement of the Legion’s formation, Google searches for “foreign volunteers in Ukraine” had fallen by over 90%.

To the extent that it has been successful, it has been overwhelmingly limited to the West, which has been largely supportive in any case. Though Ukrainian officials have declined to offer specifics broken down by nationality, the vast majority of foreign fighters have come from Nato countries. This is mainly the result of pre-existing sympathies for Ukraine but also due to the governmental restrictions outside Nato. Countries such as Algeria and Nigeria have ordered Ukrainian embassy officials to turn away volunteers, while Senegalese officials ordered the deletion of a social media post by the Ukrainian ambassador, which was condemned “illegal and punishable by law.” Global ambivalence towards the warring parties, whether in the form of abstentions during UN votes or the refusal by most countries (representing 86% of the world’s population) to impose sanctions on the Russian Federation, is reflected in the demography of the foreign fighters.

In other words, while inviting foreign fighters was intended to convince citizens and governments to support Ukraine, the reality has been that it simply affirms the globally polarised response, with active support for Ukraine from Nato countries representing most of the support. Meanwhile, the goal of internationalising the conflict, albeit not taking place in the form of direct intervention, already began prior to the deployment of foreign fighters in the form of weapon deliveries.

The propaganda role, though primarily geared for a Western audience, could have played a domestic role. Ukrainian officials have repeated the figure of 20,000 that signed up, which has since been repeated in foreign media outlets, though this likely an exaggeration. This is in the same vein as Russian casualty figures as given by Ukrainian officials, which have regularly exceeded most estimates, including those by its allies. According to Kacper Rekawek, who has researched foreign fighters in Ukraine at the Center for Research on Extremism at the University of Oslo, “merely several hundreds to a few thousands” ultimately travelled to the country. Additionally, due to a shortage of weapons, the low quality of some of the volunteers, as well as unrealistic expectations on the part of the foreign fighters, more than half of those that did travel to Ukraine had left the country within a month of arrival.

On the battlefield, foreign fighters have played an extremely minor role. The Legion has not played a decisive role in any of the major engagements so far. Additionally, some have already been dismissed following a lacklustre performance. The non-centrality of foreign fighters has resulted in an increasingly stringent selection process. Initially, Ukrainian officials called for those with military experience to come. Subsequently, the standard has been shifted to those with combat experience.

Combat experience offers the advantage of some level of preparedness, especially in the face of enemy fire. However, this by itself has proved to be insufficient when fighting a materially superior foe. Many of the fighters that have prior experience gained it in places such as Iraq and Afghanistan. Western forces had air support, greater firepower, and were not met with massive artillery attacks. As one American veteran who enlisted as a foreign fighter in Ukraine noted, “What’s different with the US military and all the other Nato militaries – they’re spoiled. When it comes to fighting a war, they have air support, medivac, logistics, all kinds of different levels of intelligence, and support. Here in Ukraine we had none of that.”

Though foreign fighters are primarily Western, they are a heterogeneous mix. Motives range from sympathy with Ukraine to adventurism to far-right extremism. This is not unique to Ukraine. Earlier conflicts, such as in the former Yugoslavia or even in the earlier war in the Donbas, have all borne witness to this reality. The conflict has already attracted some unsavoury figures, such as some Scandinavian members of the white supremacist prison gang Aryan Brotherhood. Intelligence agencies in multiple countries are now warning that some returning fighters may pose a potential danger. According to the United States’ intelligence community, far-right extremism poses the biggest domestic terrorist threat. While a vetting process has been in place for those that join the Legion, some of the volunteers, including those with a criminal background, have joined one of the many militias that have operated in the country for several years. With weapons and combat experience, what danger lies ahead? Furthermore, for foreign fighters that return home alive, the psychological impact can be immense. Since many joined the fighting clandestinely, sometimes in contravention of their own countries’ laws, it is possible that many of them could end up living with undiagnosed and untreated post-traumatic stress disorder.

As the conflict drags on, more and more foreign fighters have been captured. Britons, Americans, and a Moroccan have already been captured by Russian forces and handed over to the Donetsk People’s Republic, where some have already faced death sentences, though these have not yet been carried out. This puts home countries in an uncomfortable position. By negotiating directly, they risk offering the breakaway republic legitimacy or having to engage with the Kremlin on the matter. Despite the experience of foreign fighters travelling to Iraq and Syria, Western governments have largely failed to formulate a policy on what to do. With the capture of an Israeli national, whose country of citizenship has so far refrained from sanctioning Russia, a country-specific approach may emerge. Russia and Israel have a track record of pragmatic co-operation, which has included the freeing of Israelis from Syria, but only time will tell if this will extend to foreign fighters.

Though operationally not a significant factor, the release of captured foreign fighters could play a role in any future prisoner swaps or peace settlement. While it benefits both sides to highlight the presence of such volunteers, whether it is an indication of a shared cause or perceived threats, their propaganda value has been short-lived. However, their prominence may grow should more be captured or during negotiations for a final peace settlement.

Naman Karl-Thomas Habtom is a PhD student at the University of Cambridge, where he researches military and diplomatic history.

Russian GDP contracted by 4% y/y in the second quarter of 2022
ASH: The West is short-changing Ukraine
RIDDLE: If they fear us they respect us

ASH: The West is short-changing Ukraine
1 hour ago
RIDDLE: If they fear us they respect us
1 hour ago
COMMENT: Can Russia pivot its European gas sales to Asia?
3 days ago
Perspectives | Beijing and Moscow clash over Kazakhstan’s oil
3 days ago
COMMENT: Emerging European tightening cycle coming to an end
6 days ago