COMMENT: Global remittances to suffer a blow from COVID-19 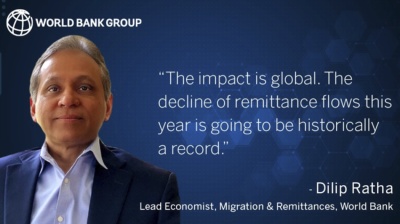 Many low-income countries depend on remittances for survival. The World Bank expects remittances to fall 20% this year from a peak of $554bn in 2019
By Gerelyn Terzo of Sharemoney in New York June 18, 2020

The coronavirus (COVID-19) pandemic has turned nearly all segments of the economy on their head. While practically no sector has gone entirely unscathed, with the exception of certain in-demand technology, some markets have been hit harder than others. For certain industries such as travel, the damage is already apparent, while for others, the toll that coronavirus is taking has yet to be fully realised. Remittances fall into the latter category as developing countries such as India, China, Mexico, the Philippines and Egypt that are popular destinations for transfers, grapple to assess the fallout from the pandemic.

One thing that is clear is that the coronavirus crisis is like no other. Instead of triggering an increase in remittance payments, which is typical during times of crisis, the uncertainty surrounding the pandemic has caused migrant payments to households in developing countries to slow dramatically.

It’s no secret that the income provided by remittance payments has become critical for some jurisdictions. According to the International Monetary Fund (IMF), the pace of remittances was on the rise pre-coronavirus, leading some developing countries to depend on the payments for their own economic development.

Additionally, many households whose family members are working overseas have increasingly come to depend on these transfers for everything from groceries to healthcare and beyond. As a result, a dire prediction recently unveiled by The World Bank cut deeply, since it affects both the migrant workers and the families to whom they send money each month. 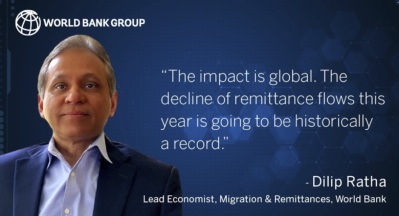 Source: proving even the most bullish estimates right. The pendulum has now swung in the other direction as a result of coronavirus, with countries now bracing for a double-digit percentage decline in 2020.

The World Bank warns of a precipitous drop in global remittance flows of roughly 20% this year, which is the severest decline in recent memory. The forecast is a direct consequence of the economic downturn triggered by the coronavirus and the subsequent global lockdowns that have lowered wages and taken jobs in their wake. This trend has hit migrant communities working in host countries especially hard.

The World Bank details that remittance flows to LMICs are forecast to drop by 19.7% to $445bn, which will cut to the heart of the economies of developing nations and the households that depend on the transfers.

According to Dilip Ratha, the World Bank’s lead economist for migration and remittances, the consequences could be alarming. In an interview with the Financial Times, he said:

“If we are expecting a fall of 20%, it’s going to be a huge shock, it’s going to cause a lot of hardship for countries in terms of macroeconomic management and balance of payments difficulties...But more important is the human story...The number of people who are going to be impacted – both for the migrants in host countries and families back home it’s going to be huge.”

In 2019, some 200mn migrant workers transferred $715bn in remittance payments to their home countries globally. Remittances for low to middle-income families, meanwhile, surpassed foreign domestic investments in volume, demonstrating how important these inflows have become to developing nations.

So what does this mean for the average household that depends on remittances for their basic needs? Sub-Saharan Africa is expected to be among the hardest hit regions, second only to Europe and Central Asia. 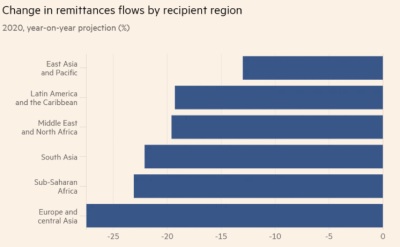 In a recent feature, Voice of America detailed how the pandemic has hit refugee camps in Africa that depend on payments from the West to survive. Fatuma Salah, a local woman with six children, depends on remittances to feed her family. She described how she keeps her phone nearby in the hope of receiving a message about a money transfer to her account, but the message had not come despite being nearly two weeks into May. She may be waiting even longer, considering that her family members living in the United States are now among the millions of unemployed.

The Economist spotlights a hair salon owner in Kampala, Uganda, who depends on money transfers from her husband in Philadelphia to feed their five children. His monthly payments of $80 have stopped since demand for his services as a driver has waned. Now the African entrepreneur is forced to depend on the government.

Remittance flows have become critical to Nigeria’s economy, according to PwC, which stated that the country needs them for its very survival. In fact, Nigeria, which is supported by remittance services like Sharemoney for transfers, led the sub-Saharan Africa region for remittances in 2018 at roughly $25bn. Representing more than 6% of Nigeria’s GDP in that year, remittance flows exceeded foreign direct investments (FDIs) elevenfold.

Remittance payments to Europe, especially Ukraine, have also been deeply affected by the pandemic. Some 3mn of the country’s citizens work overseas, which makes it an integral part of the local economy. Last year, remittance payments represented more than 8% of Ukraine’s GDP. As per the National Bank of Ukraine (NBU), remittance flows from migrant workers into Ukraine are projected to fall by $2bn in 2020 as a direct consequence of COVID-19.

One exception has been Mexico, whose remittance flows from the United States inched higher to a new record in March 2020. The most logical explanation, according to Reuters, is that migrants were able to capitalise on an attractive exchange rate. More than $4bn in remittances flowed into the Latin American country in March, up 36% year on year.

Rather than sit back and watch the remittance market crumble, some regions are fighting back. The UK and Switzerland have issued a global call to action to other countries in ensuring that the channels of money transfers remain open. According to the announcement, they are looking at technology to intervene by supporting “greater access to digital remittance services and declare remittances an essential financial service.” They have taken it a step further by asking money transfer companies to lower the costs and fees associated with money transfers.

The World Bank vows to keep an eye on the issues surrounding remittance flows, such as costs and regulation, and is working alongside G20 nations to keep transfer expenses in check for low-income families. In the interim, there is light at the end of the tunnel.

Economies around the world, including the US and some European countries, are slowly beginning to open up again, paving the way for jobs in what is most assuredly becoming a new normal. The World Bank forecasts that despite the damage in 2020, remittances to LMICs will stage a comeback in 2021, with projections for flows to increase by nearly 6% to $470bn.

Gerelyn Terzo is a staff writer at Sharemoney, a money remittance service that is passionate about improving the lives of immigrants. The granddaughter of an Italian immigrant from the town of Teora whose first steps in the US were on Ellis Island, Gerelyn resides in New Jersey.

Uranium: what the explosion in prices means for the nuclear industry
Quantifying the Caucasus’ gains from BRI trade
ING: ECB’s push for net-zero carbon will grow ESG credit