COMMENT: New skirmish between Serbia and Kosovo threatens the future of dialogue 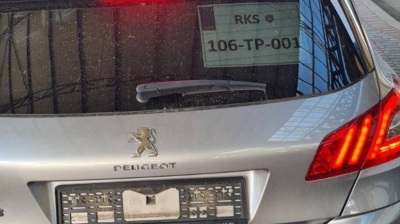 New regulations pertaining to vehicle license plates have led to a new mobilisation of protestors.
By Alex Young in Belgrade September 29, 2021

Over a decade on from the dramatic erection of barricades in north Kosovo, which brought Kosovo Serbs and Nato’s KFOR peacekeepers face-to-face, its main arteries into Serbia are once again blocked. New regulations pertaining to vehicle license plates, combined with the deployment of Kosovo Police’s Special Operations Units (SOUs) to impose them, have led to a new mobilisation of protestors. Serbia’s armoured forces have been placed on a heightened state of alert and there has been a spike in hostile rhetoric. Tensions are such that the very future of the Belgrade-Pristina dialogue and the possibilities of securing a comprehensive agreement have been brought into question.

The new regulations introduce reciprocity in the treatment of Republic of Serbia license plates in Kosovo. For a decade now, vehicles with Republic of Kosovo issued plates have had to purchase temporary replacements upon entering Serbia. This condition has now been applied to vehicles with Serbian plates entering Kosovo. It is a move that has satisfied the calls of those who insist that Kosovo can only assert its sovereignty through equitable approaches. The parties had already agreed to a simple sticker regime to cover the respective state symbols when required, but like many facets of the Belgrade-Pristina dialogue it has not been implemented.

These new regulations, however, go beyond merely introducing reciprocity. The Kosovo government has refused to extend the validity of status-neutral 'KS' plates – on which many Kosovo Serbs relied – beyond their expiration on 14 September, despite undertaking to revisit the issue with EU mediation. In addition, those Kosovo Serbs whose vehicles still sport plates provided by the Republic of Serbia face having them confiscated. It remains unclear if they can re-register their vehicles with Republic of Kosovo plates, even if they wished. Such measures have been introduced without prior warning, consultation or communication, and with a hastiness that meant the Kosovo government failed to provide sufficient means to comply.

To ensure implementation of the measures, Kurti took the controversial decision to deploy the Kosovo Police’s SOUs — previously known as the Regional Operational Support Unit (ROSU) — to the north. In response, Kosovo Serbs in the north immediately blocked the roads leading to the respective crossing points at Jarinje and Brnjak, stationing large yellow lorries (presumably belonging to the Trepca mining complex) that couldn’t simply be bulldozed out of the way. The barricades are manned by a combination of those loyal to the Sprska lista (the dominant voice of Kosovo Serbs) and public sector employees. It is a tactic they’ve perfected in the twenty years or so since the war. After some initial skirmishes, including the use of tear gas by the SOUs, that threatened to spark further deterioration, the situation has noticeably calmed. It remains to be seen how the north will be supplied with vital foodstuffs.

The SOU’s deployment is driven in large by domestic political considerations. Local elections in Kosovo will take place on October 17, and support for Kurti’s Vetevendosje has apparently declined by some 5% since their stellar performance in February’s general elections where its coalition secured over 50% of the vote. It is a problem further compounded by the comparative weakness of Vetevendosje’s local infrastructure. By rousing nationalist sentiment, Kurti hopes to be able to capitalise politically. It is unclear, however, just how the SOUs will ultimately be stood down; a criticism that is beginning to be voiced in Pristina. The barricades have put a strain on their supply lines. Rotations now require that replacement police walk some three kilometres through the barricades in order to take up their positions. It is a tiring and dispiriting process.

Across the border, Serbia’s President Aleksandar Vucic — himself with one eye on presidential, parliamentary, and local elections next spring — placed the armed forces on an elevated state of readiness. Two Orao military aircraft (not MiG-29s as some reported), relics from the Yugoslav days, were flown in the vicinity of the border, where armoured vehicles have also been deployed. Russia's ambassador in Belgrade, Alexander Botsan-Kharchenko, accompanied by Serbia's defence minister, Nebojsa Stefanovic, visited the Raska garrison, close to the Jarinje crossing. Serbia’s tabloid media have further roused sensationalist and nationalist sentiment. A building in Zubin Potok in north Kosovo where temporary license plates were issued burnt down (an electrical fault was initially blamed), whilst two hand grenades were thrown at the civil registry office in Zvecan (though fortunately they failed to explode).

Josep Borrell, the EU's high representative for foreign affairs, has called upon on Serbia and Kosovo to “unconditionally de-escalate the situation on the ground, by immediately withdrawing special police units and dismantling of roadblocks"; adding that “any further provocations or unilateral and uncoordinated actions are unacceptable”. This call for de-escalation was echoed by Nato’s secretary general, Jens Stoltenberg, amongst others. The EU has been criticised for making an equivalence of responsibility between the respective parties to the conflict.

Its role as a neutral mediator in the dialogue process has already been publicly questioned in Pristina, where antipathy towards the EU has grown due to the continued failure to grant Kosovo visa liberalisation despite the European Commission determining that all required conditions had been fulfilled. Even prior to assuming power in March 2021, Kurti spoke of the need to review all the commitments Pristina has made to date during the dialogue. The notion of reciprocity has been a key cornerstone of this new narrative. This latest move was a slap in the face for the EU’s special representative for the Belgrade-Pristina dialogue, Miroslav Lajcak, who had been in Pristina only days before and who flew into Belgrade on the very day the SOUs were deployed.

Though talks between Belgrade and Pristina will continue on a technical level, whilst Kurti and Vucic are slated to meet in due course, the very future of the dialogue process remains uncertain. Posters have been erected in Serb-majority municipalities welcoming people to the so-called ‘Community of Serbian municipalities’. The Association or Community of Serb-majority municipalities, one of the key planks of the 2013 Brussels Agreement, remains unimplemented. For Serbs, it is a vital mechanism for safeguarding various elements of their community’s life in Kosovo. Continued resistance to its establishment by Pristina may ultimately bring into question other elements of the agreement, namely the implementation of Serbian police, judges, and prosecutors into Kosovo’s legal and institutional framework. The EU must be careful to ensure that all the hard earned achievements to date are not gradually unpicked.

Furthermore, the barricades and associated instability will further blight trade and investment. Kosovo only recently lifted a 100% tariff on goods imported from Serbia and Bosnia & Herzegovina, imposed in response to Belgrade’s (often successful) efforts to stifle Kosovo’s bid for international recognition. It is also a potential blow to the Open Balkan initiative — spearheaded by Serbia, Albania and North Macedonia but opposed by Kosovo, Bosnia and Montenegro — which is designed to facilitate flows of goods and people in the Western Balkans. Seen both as a complement and competitor to the Berlin Process, Kosovo politicians have been reluctant to sign-up due to Serbia’s unconstructive stance vis-a-vis its fledgling statehood.

A decade ago attempts by Pristina to take control of the two crossing points in north Kosovo led to the erection of barricades throughout north Kosovo. Kosovo Serbs, some of them armed, were in direct confrontation with Nato’s KFOR. A young Kosovo police officer was killed in the process. The episode rammed home the delicacy of the situation and the need to secure compromises. Subsequent steps on freedom of movement and customs ultimately set in motion the process that led to the 2013 signing of the Brussels Agreement, one of the most significant achievements of EU diplomacy under Baroness Ashton.

The current tensions will hopefully persuade individual EU member states about the fundamental need for renewed momentum towards a comprehensive normalisation of relations between Serbia and Kosovo. The issue cannot be left unresolved. Without such an agreement, tensions will continue to fester and worsen, and the daily lives of Kosovo’s Serbs and Albanians alike will be sorely affected. The consequence will not only be further disillusionment with the EU, but the continued escape of people to Western Europe. Brussels has invested substantial political capital in the dialogue process and it cannot afford to squander it now.

Kosovan police clash with Serbs in Mitrovica in anti-smuggling operation

Rooting out corruption proves a tough job in North Macedonia

Russia's exceptionally strong current account surplus helped the ruble outperform its peer currencies in 3Q21 and is likely to keep doing so in 4Q21. As a result, we see USDRUB appreciating to 70.0-71.0 in the coming month.

STOLYPIN: It isn’t the ‘Usual Suspect' who is really 'weaponising gas'

That naughty Vladimir Putin is up to his tricks again. Not weaponising football hooligans or COVID vaccines this time, but gas. Politicians are queuing up to blame Russia. The trouble is, this is not just bad analysis but also bad politics.

ING: Winter is coming… and so is further volatility for energy markets