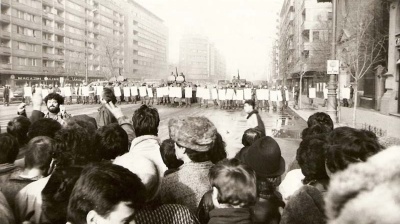 Protesters in Bucharest during the Romanian "Revolution" of 1989.
By Alexandru M. Tanase in London November 19, 2019

The Germans marked the 30th anniversary of the Berlin Wall’s fall on November 9, 2019. Three decades later, not all Germans are decided on how to label this historic event. For many of them, especially those in eastern Germany (the former GDR), day-to-day life was almost a disappointment. Mutatis mutandis, the same is true for Romanians who will mark the 30th anniversary of events which are not clear even today in December 2019. Most of the files of the “Revolution” (the term is widely contested) are still unresolved. However, the December 1989 events marked the start of Romania’s transition to a market economy, which in itself has historical significance. The fall of a dictatorial regime on Christmas Day 1989 brought freedom in many forms for many Romanians. Since then they have had a new democratic Constitution and abolished the queues for basic foods. They have been free to speak, to elect and be elected in a transparent manner, travel abroad, hold foreign currency legally, participate in a democratic manner in the management of society, access free education and hold many other freedoms which were inconceivable before. For the first time in the last century, Romanians got access to free mass media, as well as to modern technologies, including IT. This was indeed revolutionary for many, especially for the young generation.

Before achieving full membership of the European Union (EU), Romania was admitted as a full member of the North Atlantic Treaty Organisation (Nato) on March 29, 2004 following the decision taken at the Prague Summit in November 2002. Many other counties in the region have still to gain admission to the two organisations. This clearly represented a major achievement for Romania. In one of the most prestigious achievements of Romanian’s transition, the country became a full member of the EU on January 1, 2007 at the same time as Bulgaria and ahead of Croatia and many other states in Eastern Europe and the Balkans. Starting with January 1, 2019, Romania held the presidency of the EU Council for six months. The final meeting was organised in Sibiu on May 9 with heads of state and prime ministers happy to visit one of the most beautiful parts of Transylvania. However, the EU high level meeting did not bring any clear or innovative strategic orientations, as the election of the governing bodies for the EU was well underway.

Despite these formidable achievements, day-to-day life was not plain sailing for all Romanians. There were many frustrations on the political side during the last three decades. Since the first free elections in May 1990, there was a clear collective unhappiness with the structure of the new political class which emerged in transition. Moreover, the files of the December 1989 events and those of the subsequent events — starting with the “mineriades” (miners’ rampages in the capital and other cities) up to the August 10, 2018 repression of demonstrations in Bucharest — were never resolved and the chances that they will be are slimmer and slimmer as many of the key participants simply passed away. Historians will have a huge task ahead of them to clarify events which are more and more just distant memories. Meanwhile, a small number of Romanians amassed huge but unexplained wealth. The corruption of the new Romanian oligarchs was a constant feature during the three decades of transition and justice was mutilated for many years. Few corrupt persons were put in prison for corruption, but the most unexplained part was the lack of recovery by the Romanian state of stolen assets. Even worse, sometimes the interference of great powers did not help the Romanian authorities.

Moreover, the structure and the fabric of Romanian society changed dramatically over the last 30 years. As presented in the table below, Romania’s population decreased from 23.2mn on July 1, 1989 to just 19.4mn as of the start of 2019. It is currently estimated that some 5mn Romanians have emigrated since December 1989 and the Romanian workforce has been reduced dramatically. There are many sectors (construction, infrastructure, agriculture, tourism, etc.) in which there is already an acute problem due to the lack of labour force. Many companies are now “importing” workers from China, Pakistan, Vietnam, etc. Moreover, the current Romanian population is ageing with the relevant indicator increasing from 116.3 (as of January 1, 2018) to 118.8 old people/young people (as of January 1, 2019). This will be a serious challenge for Romanian society for many years to come. The segment of the population which simply emigrated abroad was unfortunately the young one, both male and female. In the past, those emigrating were mainly highly qualified people (doctors, nurses, economists, etc.), but now many people able to work have left the country. This will put a heavy burden on the state budget and particularly on the pension system, as the inter-generational “agreement” was broken. It is currently estimated that almost €1bn is required to be borrowed from abroad to pay the 5.16mn pensioners (end-June 2019) and the special pensions granted to selected categories of Romanian society. This has grave consequences for macro-economic equilibria and no government in power so far had any appetite to abolish the special pensions or to highly tax them.

According to the figures published in October by the National Bank of Romania (BNR), the level of total gross foreign debt of the country reached €108.9bn, which is well above what was considered so far the peak reached in April 2013 of €102.7bn. In absolute terms, this is a sizeable increase. During the last three years alone total foreign debt increased by €16bn from €92.9bn as of end-2016 and most of it was for consumption, not investment. However, the issue of Romania’s foreign debt has been disregarded by almost all governments in power since 1990. By international standards, Romania is not yet a highly indebted nation, with the foreign debt/GDP ratio at around 50% (there are various estimations in this respect and many should not be trusted as they are mis-interpreted, especially in election years as is the case with the 2019 presidential elections).

There are many immediate tasks in front of the country, authorities and society as a whole. Realistically speaking, not all of them are solvable in the short or medium term. It took three decades to reach this stage and most likely another 30 years will be needed to rebalance the macroeconomic disequilibria and to put things right. The required efforts will be huge and the starting point should be now. A few such tasks to unleash the economic, social and political potential are underlined below:

All of the above are easier said than done, but delays in implementing them could have grave consequences for generations to come in the next 30 years. Or even longer.

Sources: Table compiled based on the EBRD - Transition Reports (various editions); IMF - IFS Yearbooks (various editions up to 2018); Data of National Institute of Statistics and of the National Bank of Romania; Reuters; na = not available; GDP/GNI are according to World Bank Atlas for 2015;

Notes: Unless otherwise stated, data for 1989 were reported in relation to USD, while the 2019 or latest available data were reported in relation to EUR; GDP/capita estimation for 1996 by World Bank; Exports and Imports figures for 2018 latest available on annual basis; Average exchange rate for 2018 of lei/euro was at 4.6535; Population of Romania as of January 1, 2019; GDP for 2018 and state budget deficit for 2019 - (Anuarul Statistic al României - 2018) and INS publications and own computations/estimations.

Alexandru M. Tanase is an independent consultant and former associate director, senior banker at the EBRD and former IMF advisor. These are the personal views of the author and not of any institution quoted. The assessment and data are as of mid-November 2019.

Whether the law begets justice is not a foregone conclusion. On February 4, 2020, Polish President Andrzej Duda signed legislation that permits the opening of disciplinary action against judges who criticise reforms

Recriminations over lack of progress with country’s big Black Sea ambition will fly ahead of general election.

THE MITTELEUROPEAN VIEW: When the nuclear option fails – Von der Leyen’s rule of law instruments vs political realities
3 days ago
Torpedoed. Georgia’s government knocks out consortium contracted to build Anaklia deep sea port but flagship infrastructure should still be built
4 days ago
ALACO DISPATCHES: I say Moldovan, you say Romanian…
5 days ago
ING: Russian budget spending plays catch up in January
10 days ago
TRACE: A closer look at corruption risk in the western Balkans
17 days ago