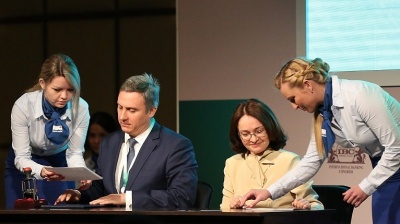 Russia's central bank is worried that big changes in the structure of economy over the last year -- like so many workers going online -- have changed the way inflation works. So it is launching a big review of its policies to work out how to proceed.
By Artem Zaigrin Chief Economist at Sova Capital July 6, 2021

The International Financial Congress was held by Central Bank of Russia (CBR) on June 28 –July 2. The conference was designed to discuss and reshape policies in the medium term. The forum can be considered an analog of the Federal Reserve's annual Jackson Hole policy symposium. Apart from macro-prudential policies, banking/insurance/capital markets regulations, there were notable takeaways from the plenary session on June 30 and the economic policy session on July 1. We outline the major takeaways below.

The headline event was the speech by CBR Governor Elvira Nabiullina on Wednesday, June 30.

We look favourably on the efforts of CBR to raise transparency and smooth the decision-making process for at least next year. The invitation to discuss the inflation target provides a stark contrast to the most recent policy shifts: the harmonization of policy instruments in autumn 2013 and the switch to inflation targeting in December 2014, change in the neutral rate assessment in July 2020.

Recently, major central banks have reviewed their monetary policies. The US Federal Reserve bank started its review in early 2019, delivering a new framework by August 2020. The study resulted in an amendment of the 2% inflation target, which had been in place since 2012. The Fed never managed to bring inflation consistently up to 2%, while its employment projections failed to meet reality. The new approach calls for pursuing an "average 2%" inflation rate and more tolerance toward lower unemployment levels as long as inflation pressures are low.

The European Central Bank (ECB) launched its most extensive strategy review in almost two decades in early 2020. The bank is now close to the final stage of discussions. This week it might agree on the key parameters of the new policy framework. As such, the policymakers might need a new formulation of the inflation target instead of "below, but close to, 2%." Also, the bank needs to accommodate its policy on climate change policies and address labour market issues.

Back to Russia, from 2014 the Central Bank aimed at keeping price stability via targeting the y/y consumer inflation rate at "around 4%," e.g., allowing for small fluctuations around the target. After the initial phase of shock absorption in 2015, inflation fell from c. 17% y/y in early 2015 to the vicinity of the target level in early 2017. After 2017, CPI fluctuated within the range of 2-6%. The most recent external shock in 2018 and the global COVID-19 pandemic did not push inflation far above the target compared to the 2009 and 2014 crises. In our view, this implies the success of CBR in inflation targeting. However, CBR failed to anchor household expectations – they are still far above the headline (14.9% perceived inflation/11.9% expected inflation in June 2021).

In the future, CBR should take into account the structural changes in the global and Russian economies: the rise of high-tech industries due to higher online penetration; digitalization that gave a boost to the introduction of cryptocurrencies and digital currencies (CBDCs); a potential green energy transition that could radically overhaul Russia's economic structure; demographic changes and shifts in labour demand and skills. All these factors might impact the general level of prices with a subsequent shift in the inflation environment.

Before the pandemic, the market was actively advising CBR to review its inflation target from 4% to something lower, e.g., 3% y/y. The arguments came from global disinflationary pressures and local developments: the economy moved from the rapid growth model to stable growth with 1-2% y/y potential.

Analysing the current economic developments, we think CBR is unlikely shift to another form of policy targeting (e.g., 3-5% CPI range). The key question is whether the target could be lowered. One obstacle for lowering the target to 3%, or even lower, might be the issue of unanchored inflation expectations. The policy could contradict the reality observed by the vast majority of the population.

Another obstacle is the growth model taken on board by the government. The current paradigm seems to us as raising the economy's potential growth via higher infrastructure spending. This could be fulfilled with both public and private sources. The latter could come from higher uptake via higher taxes, stimuli to spend wealth (especially from abroad), and sovereign fund use. Should this spending be insufficient, it could spur inflation momentum in the medium-term and not be able to deliver a lower price environment in the longer term.

On balance, we think that the inflation target might remain unchanged at this review. At the same time, the structural changes in the economy and financial system might overhaul the instruments that keep inflation in check.