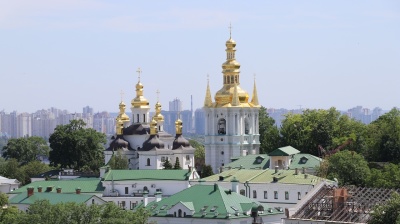 Five years after the Maidan revolution, the ‘deep and comprehensive’ free trade agreement (DCFTA) between the European Union and Ukraine is turning out to be an important vehicle in the Eastern European country’s gradual economic decoupling from Russia. It is also buttressing the country’s slow but steady reform path.

“The DCFTA came as a lifeline to Ukraine,” said Nazar Bobitski, who heads the trade section in the Ukrainian Mission of Ukraine to the EU in Brussels.

In 2016, the year it came into force, Ukraine had undergone traumatic events. Russia had annexed Crimea two years earlier. Moscow was fostering violent unrest in the Donbas — Ukraine’s industrial heartland. Russia had also cancelled a 1990s bilateral free trade agreement tied to the post-Soviet Community of Independent States. The two neighbours have been stepping up tit-for-tat trade bans ever since. Moscow only recently stopped blocking transit of Ukrainian products sold to countries in Central Asia.

The trigger of the crisis was the very decision by Ukraine to sign on to an Association Agreement with the EU of which the trade pact known as DCFTA is the pillar. The association pact’s main objective is to tie Ukraine to European political norms and initiate a process of regulatory approximation with the EU. Russia induced then Ukrainian leader Viktor Yanukovich not to put his signature under the deal. This triggered mass protests and a political revolution in Ukraine.

The very nature of EU-Ukraine trade is also evolving. Ukraine is known for being an agricultural commodities and metals exporter. Agriculture remains a top speciality of Ukraine, where cereals, oil seeds, animal or vegetable fats and oils dominate the picture. Exports of meat – especially poultry meat – dairy, fish and fruit and vegetables to the EU have increased significantly. “Ukraine became the EU’s fourth-biggest supplier of agricultural products in 2017, and the first supplier among our FTA partners,” reads a European Commission report on the functioning of its trade agreements.

Ukraine’s ability to export more to the EU is linked to the gradual roll-out of EU sanitary and phytosanitary standards in the country. Ukraine has not been able to use quotas allocated to it in the DCFTA for sheep, pork and beef meat, “due to non-compliance with EU SPS regimes,” said the Commission.

Yet EU-Ukraine trade is increasingly defined by industrial supply-chain trade, whereas metals and heavy industry – part of which are now beyond reach in the Donbas – play a smaller role.

Evolution of Ukrainian goods exports. A clear reorientation away from Russia and towards the European Union. 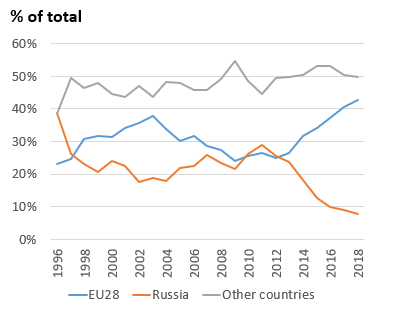 Data and graph: Institute of Economic Policy Research and Consulting.

According to the Institute for Economic Research and Policy Consulting in Kyiv, the share of processed products in Ukrainian exports to the EU increased by 10% to 43% between 2013 and 2018. The share of raw materials dropped by 5%, the rest being absorbed by semi-processed goods.

Ukraine is well positioned in the global tech industry. Exports of telecommunication, computer and information services increased from US$ 1.7 billion in 2014 to US$ 2.1 billion in 2018. Ukraine’s tech geeks increasingly look to the EU as a market.

Economic integration is set to continue as Ukraine rolls out EU regulations in the manufacturing and services sectors. The DCFTA foresees 27 sectors – including toys, marine equipment, medical devices and electrical equipment — in which Ukraine will apply dedicated EU technical and environmental regulations.

The DCFTA further foresees that Ukraine align its legislation with the EU’s in postal and courier services, telecommunication, financial services and international maritime transport services.

“In general, implementation of the Agreement and approximation of legislation are advancing at reasonable pace,” European Commission staff reckon. Veronika Movchan, director of the Institute for Economic Research and Policy Consulting, said the regulatory approximation process of Ukraine started years before the DCFTA came into force and still continues. “It’s a long, gradual process,” said Movchan.

The big prize the Ukrainian government is aiming for is the Agreement on Conformity Assessment and Acceptance of Industrial Products, a deal promised to Ukraine once it has put in place relevant EU technical legislation. Once such a deal is approved then Ukrainian products would receive automatic single market treatment and avoid costly extra import checks in the EU.

Despite misgivings from parts of the EU’s farming sector, which is feeling the heat of Ukrainian competition, European business and farmers are also benefiting. The European Commission notes “an increasing appetite for EU agriculture produce” in Ukraine. Between 2013 and 2017, EU exports of live animals and animal products increased by 21% although from a lower level from €250 million to €304 million. Exports of foodstuffs, beverages and tobacco increased by 19.5% to € 940 million while vegetables saw an increase of 13.4% to €537 million,” the EU’s executive body noted in its staff report.

The rise in bilateral trade has not come without frictions. This year the EU asked Ukraine for a renegotiation of a poultry tariff rate quota after a successful Ukrainian businessman found a loophole to circumvent an EU chicken breast quota, by importing chicken with bones and deboning them in a factory he owned and which was located in the EU.

Three years into the deal, the EU initiated one of its first formal legal disputes under a bilateral trade agreement. The EU is disputing Ukraine’s ban on exports of wood, referring to a WTO rule on export restrictions that Kyiv and Brussels had integrated into the DCFTA.

The two sides are still in the process of appointing a panel of arbitrators that would assess if Ukraine has breached the terms of the deal. If, at the end of the process, Ukraine is found in violation of the agreement and to continue not to comply, the EU could cancel trade benefits under the DCFTA.

The government in Kyiv is not resisting the process. The wood topic is sensitive back home. The government knows it needs to tackle a delicate situation involving state-owned enterprises in charge of managing forests in Western Ukraine – whose role is both commercial and to fulfil environmental goals. The well-intentioned wood export ban however does not appear to solve an acute problem of deforestation and smuggling.

No panacea for Ukraine

The DCFTA has not been a panacea for Ukraine. The country’s output growth levels of 2.5% per year since 2015-2016 have been positive, but well below what Ukraine needs to lift its population out of poverty in a sustained manner.

Ukraine has failed to attract the high levels of foreign direct investment its leaders had hoped for. Foreign direct investment flows have not recovered from the 2014 crisis. Five years ago Ukraine attracted more than $53bn worth of foreign investments. That figure has hovered around $32bn annually since 2016. Ukraine’s reputation for corruption and the many local and regional political uncertainties appear to have played a role in deterring foreigners in committing monies to the country.

Movchan says that the DCFTA has in fact above all emboldened Ukrainian investors in betting on the country – mainly by repatriating money stashed in offshore jurisdictions. In Ukraine, the agreement is clearly perceived as an anchor for Ukraine on its path towards a more modern government and economy.

Despite headwinds Ukraine is making gradual progress in tackling corruption and fixing its business environment. In 2014,Ukraine ranked 136th in the world-famous Corruption Perceptions Index of the NGO Transparency International. In 2019, Ukraine ranked 120th. Ukraine’s score in the World Bank’s Doing Business index is also on an upward trend, with Ukraine ranking 71st globally: that’s a better position than the EU’s very own Greece.

Both Ukraine and the EU recognise that the DCFTA needs to be modernised and updated. During the EU-Ukraine summit this year, Brussels and Kyiv already agreed to discuss digital, customs and energy matters – a sign of potentially more to come when the deal is formally up for revision in two or three years’ time.

This article first appeared in the premium section of Borderlex, a publication that specialises in international trade issues.
Read in IntelliNews Pro
Get IntelliNews Pro

Global demand for electricity is projected to surge over 20% this decade. Power generation accounts for 40% of emissions and Emerging markets, notably China and India, will account for over 85% of rising demand in the next ten years.

It is now over a year since the Romanian government, in December 2018, unexpectedly introduced draconian taxes across different sectors, which sent equities into a spin. Yet it finished the year with a 39% return on equities.