COMMENT: Ukrainian Interior Minister Avakov – A State Within a State 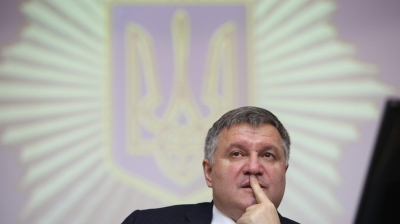 Ukraine's Interior Minister Arsen Avakov has been on the job six years and amassed an enormas amount of power. He has been called a state within the state, but will he be ousted now?
By Robert Homans in Kyiv June 9, 2020

ED - In the last week popular protests have rallied against Ukraine’s powerful Interior Minister Arsen Avakov. One of the longest serving ministers in the Zelenskiy administration, he has ties to oligarch Ihor Kolomoisky and worked for the Poroshenko administration, but he is widely seen as building his own powerbase and operating independently. Now he has nailed his flag to Zelenskiy mast, who has come to rely on him to run the police and security services as the president is now clearly shoring up his hold on power. Calls are growing for his dismissal, but at least 150 deputies have to subscribe to a motion in the Rada to discuss his dismissal and that is unlikely to happen. Below is a note from Robert Homans, an American investor and political commentator.

Arsen Avakov has been Ukraine’s Interior Minister for six and half years, under three Presidents including Interim President Turchynov, who served for three and half months, between the time of Yanukovich’s departure and Poroshenko’s election as President.

As Interior Minister, Avakov controls the National Police, regional and city police departments, the National Guard, the Border Guard, and the State Migration Service. For Americans, imagine if the Attorney General of the United States controls the FBI, which he/she already controls, plus local police departments, the state national guards, and immigration & customs enforcement, and one can begin to imagine the power that Avakov has at his disposal. This amount of power, residing in one person for as long as it has, over six years, makes Avakov, along with the agencies he controls as Interior Minister, a “State Within a State.”

Along with the Presidential Administration, and Avakov’s Interior Ministry, I would argue that there are 3 other “States Within States” in Ukraine, where each operates with relative autonomy:

The five States Within States operate relatively independently of the country itself, with almost complete authority over their respective purviews, and with independent sources of financial support, much of it through collecting of rents, otherwise called graft.

Recently, there have been increasing calls for Avakov’s removal. There was an assault and rape of a woman by police, done inside a police station, in a city south of Kyiv. Just last week, in the town of Brovary just northeast of Kyiv, there was a shootout between two rival criminal gangs, over control of the marshutka service (minibuses that form a key part of Ukraine’s system of public transport. This has led people to ask, “in the six and half years Avakov has been Interior Minister, what has he done to reform the agencies under his control?” The answer is “not much” But does it really matter?

Even if Avakov leaves or is forced out will the underlying system, consisting of the States Within States as I’ve described, really change? Unless forced to do so, Avakov’s successor will likely be unwilling to give up the control that Avakov enjoys today. In addition, many of the efforts to weaken foundations of one, or more, of the States Within States, have foundered. Reformist Heads of Customs, Civil Service, General Prosecutor Service and the Health Minister have all been removed. All of these agencies were substantial sources of graft, which these reformers were trying to eliminate.

There are some encouraging signs:

Breaking up the power of the States within States can be done. The question is whether or not there is the will to do so.