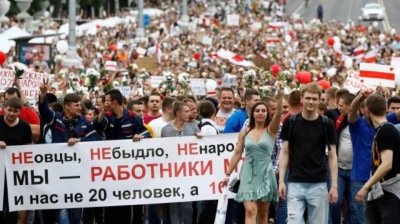 There have been a lot of comparisons between Belarus' revolution and the other "coloured" revolutions in the former Soviet Union space, but looking more closely the similarities are only superficial / wiki
By James C Pearce in Moscow August 19, 2020

Developments in recent weeks suggest a reordering of European politics will occur. The truth, however, is that Belarus is unlike anything we have seen in Eastern Europe and the post-Soviet space before. Comparisons of previous uprisings and mass protests are redundant, and the Colour and Velvet revolutions offer little insight into what this eventual reordering will look like.

In Belarus, there is no sincere mood for dialogue and change, as in Poland and Hungary in the late 1980s. Mikhail Gorbachev also intervened in Czechoslovakia and East Germany to make sure the governments did not turn on their own people. Thus far, Russia has kept more or less mum on the situation unfolding and Belarus' President Alexander Lukashenko’s offers of constitutional amendments are hollow.

Let’s start by looking at the low-hanging fruit that is Ukraine. Belarusians are not carrying EU flags at the protests, which did not begin over a choice between closer integration with Russia or Europe, and are unlikely to come down to such a choice. Russian President Vladimir Putin spoke with European leaders and Lukashenko over the past few days, and all, it would appear, agree on one thing: no outside interference.

Ukraine already had an established political opposition with seats in the government legislature. As Russian journalist Leonid Ragozin put it, the essential failure of Ukraine’s Maidan revolution was not to deliver on its promise to create a genuine democracy instead of oligarchic mafia pluralism. Belarus must learn from this, but the comparison stops here.

Speaking at an online event recently, Kseniya Shvedova, director at Integrity Investments, stated that the question now is whether Belarus’s opposition movement can survive without Svetlana Tikhanovskaya. To be successful, the protestors must now hold out longer than the security services, some of whom Lukashenko recently awarded medals to. But there is also another important difference here: this coalition of protestors agree that Lukashenko must go, and little else. Tikhanovskaya is an incredibly courageous woman, but her platform has no real policies that brought people together other than the explusion of Lukashenko from office and the holding of fresh and free elections.

Tikhanovskaya is, however, now the face of the political opposition. So could one find a comparison with, say, anti-corruption blogger and opposition activist Alexei Navalny in Russia? He likes to think of himself as the only true opposition to Putin and has a vague political platform. Like Tikhanovskaya’s husband, he is also a (relatively) successful blogger.

Well, no, Tikhanovskaya is nothing like Navalny. Navalny has already established as big a base as he is likely to get, backed up by independent pollster the Levada Center: just 9% had a favourable opinion of him in late 2019. His leadership style also makes it difficult for him to build a broader coalition of anti-Putin or United Russia voters. The same faces have, in fact, been around Navalny for years (Volkov, Yarmysh, etc.) and his volunteers do little more than contribute weekly videos. Election irregularities aside, Russia does also have multiple political parties. Even if, say, at the Duma elections in 2021, different groups unite to unseat United Russia, Navalny is highly unlikely to be the main benefactor. Just look at the Moscow Duma’s 2018 elections.

Comparing Belarus to the protests in Moscow 2011-12 is another false equivalency. Those protests were predominantly made up of the educated middle classes in Moscow. In Belarus, the largest protests are in Minsk, but it has spread to all parts of the country now and across different groups, including those previously loyal to Lukashenko, namely the elderly and rural communities.

One other minor point to consider is that since the centenary of 1917, countless historians, including myself, have gone out of their way to tell Western media that Russians are not that revolutionary. The term revolution has quite negative connotations in Russia, and the legacy of 1917 and memories of perestroika still haunt the collective memory. Expecting the Belarusian protests to spread inside Russia is intellectually idle.

Another talking point has been whether we could see a Crimea-like situation, where Russia either annexes Belarus or intervenes militarily. Annexation, at least for now, seems unlikely. Russians are not hungry for it, and the financial costs would be high. It is not inconceivable that the Russian security services could intervene in favour of Lukashenko, but Moscow has not gone all in for him yet. Keeping Belarus firmly in Russia’s sphere of influence is the main priority, which should not be difficult – Russia remains Belarus’s most important ally. Whilst a full integration is a long way off, moving closer into the orbit of NATO and the EU is even less likely.

Does that mean Belarus is more like the other Colour Revolutions in Georgia and Kyrgyzstan? Nobody serious has gone there, so that should tell the reader enough. Just to humour the reader, though, Kyrgyzstan had Central Asia’s first democratic transition of power in 2017 that came on the back of a few bloody uprisings, and it still may not last. And why not Armenia’s velvet revolution? Because Armenia had an established civil society and pluralistic opposition. Therefore a better environment existed for peaceful protests and a transition of power.

Finally, there are the leaders themselves to consider. In many respects, Lukashenko is much closer to Central Asian dictators than Putin, who despite declining numbers, is still popular. Even in Central Asia, however, this is still not a particularly useful comparison, because Lukashenko is now severely tainted. Former Kazakh president Nursultan Nazarbayev stepped down and has faded into the background relatively peacefully. When the former dictators of Uzbekistan and Turkmenistan died, talks naturally emerged regime collapse – but they have not.

Observers would do well to treat the Belarusian situation for what it is, not what they would like it to be. Events will unfold in their own way and historians will label them appropriately.

James Pearce is a Moscow based historian and the author of the use of history in putins Russia, who currently lectures at the University of Liverpool.