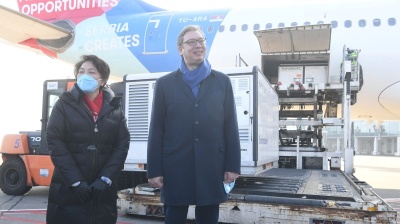 Serbian President Aleksandar Vucic welcomes a delivery of vaccines from China. / predsednik.rs
By Clare Nuttall in Glasgow May 5, 2021

On May 3 European Enlargement Commissioner Oliver Varhelyi arrived in Belgrade on the first leg of his whistle-stop tour of the Western Balkans, bearing coronavirus (COVID-19) vaccines. During the visit, Varhelyi distributed vaccines donated by the EU, as well as discussing enlargement prospects – two topics of critical importance in the EU-aspiring region.

However, Varhelyi’s visit comes as a number of countries from the region are already looking east, in particular to China, as the EU – despite €3.3bn of support extended to the region during the pandemic – has been losing the PR battle against other world powers over the last year.

While EU members struggled to get vaccines for their own populations, politicians from candidate states, notably Albania’s Prime Minister Edi Rama, have complained of the region being abandoned by Brussels once the EU faced its own crisis. Varhelyi’s delivery comes after Serbia has already stepped into the void and established itself as a provider of vaccines to the region, and member states have signed up for China’s Sinopharm vaccine and Russia’s Sputnik V.

The ground lost by the EU in the Western Balkans and the geopolitical struggle for influence in the region in the pandemic era were the subject of two online panel discussions organised by European think tanks in recent days.

Panellists pointed out that the receding prospects of EU accession created room for other actors to make headway. “Unfortunately, the vision of EU membership for the Western Balkans has become more blurred, more distant and therefore also less motivated. When we created a void in the region, others came in with other ideas,” said EU Special Representative for the Belgrade-Pristina dialogue Miroslav Lajcak during the online conference The Geopolitical Gambles in the Balkans organised by the Italian Institute for International Political Studies (ISPI).

The EU had already faced competition initially from Russia and more recently from China in the region and, commenting on the geopolitical situation, Tena Prelec, research fellow at the University of Oxford Department of Politics and International Relations, commented: “the pandemic has really exposed and amplified dynamics already present beforehand rather than opening new themes.”

She pointed to the vulnerabilities of the region such as weak healthcare systems and large elderly populations that made EU help crucial. “If the EU wanted to be real geopolitical player it needed to intervene and really help out the Balkans. The EU’s help did come through, eventually – it was the single most important donor, with the value including for socio-economic and economic support exceeding €3.3bn – but as often happens the EU help was slow, sent mixed messages and was unco-ordinated,” said Prelec.

“It’s good that Oliver Varhelyi is now there showing solidarity but it is now 14 months into the pandemic. The consensus is that the first few months were lost in terms of communicating EU help to the Western Balkans. In parallel – as seen often – actors such as China and Russia have the ability to be able to send much quicker and more unitary messages than the EU.”

This message was reinforced by both some media in the region and by politicians, notably Serbian President Aleksandar Vucic, who chose to take the Sinopharm vaccine and was photographed kissing the Chinese flag when China delivered masks and other medical equipment last spring.

The pandemic followed several years during which the enlargement process had flagged, and the discontent felt by the aspiring members in the Western Balkans was increasing. Even the government in Skopje’s radical step of changing the country name from “Macedonia” to “North Macedonia” to resolve its long-standing dispute with Greece failed to unblock the country’s membership progress as the Bulgarian government vetoed the start of accession negotiations over a separate set of linguistic and historical issues.

In a separate online panel discussion COVID-19 and the geopolitics of the Balkans organised by economics-focused think tank Bruegal, Catherine Wendt, head of the European Commission’s DG NEAR unit, acknowledged that the process had got “bogged down”, but argues that the current enlargement police is “credible with clearly defined parameters to move forward” and also notes the revised methodology that is intended to reinvigorate the process.

While candidate countries feel they are not moving forward fast enough, Wendt argued that the need for credibility has to apply to both sides, and for their part EU member states feel that reforms have stalled in some cases. “Dynamism is very important seen from both region[s] and the European Commission. We want to move more quickly, but subject to countries meeting the criteria.”

Aleksandra Tomanic, executive director of the European Fund for the Balkans, said that the EU still enjoys trust among the populations of the Western Balkans but criticised the failure to progress the accession process. “When you look at what North Macedonia has done and see they are still blocked, I think the EU has made a big mistake there,” said Tomanic.

China’s interests in the Western Balkans

Looking at China’s motivation for seeking to increase its role in the Western Balkans, Richard Turcsanyi, programme director at the Central European Institute of Asian Studies, quipped that China is “not a Santa Claus going around the world offering free gifts and building factories and bridges for free. China is in the Western Balkans for its own interests, which are both economic and political.”

The pursuit of these interests also has had negative side-effects in the region. Turcsanyi argued that China is not deliberately blocking the Europeanisation or eroding democracy in the Western Balkans – its key ally Serbia would be more useful to Beijing within the EU than outside – but that China “has a certain gravity and as a result of that gravity China is allowing corrupt regional elites to go on with their business without feeling the need to reform”. He singles out the disregarding of environmental standards for some infrastructure projects in the region.

A similar point was made by Tomanic, who commented that aside from the EU, “there are other actors giving cheap money without conditions and we see the result: state capture. The EU has been to tolerant to state capture tendencies.”

Justyna Szczudlik, deputy head of research and co-ordinator for the Asia-Pacific programme at the Polish Institute of International Affairs (PISM), charted the rise of China in the region (and worldwide) from 2012, when Beijing stated looking for new partners and export markets in response to over-capacity and slowing growth at home. With their proximity to the important Western Europe market and relatively under-developed infrastructure, the Western Balkans, and the Central and Eastern Europe region as a whole, were interesting for China. However, Szczudlik argued that China has been relatively ineffective especially among the CEE’s EU members, where “the only success story is trade”. While the Western Balkan countries have been more receptive to offers of loans and investment, Montenegro has run into difficulties with repayments and there are many more promises than finished products.

And while China hasn’t managed to replace the EU in the region, Dimitar Bechev, director of the European Policy Institute in Bulgaria, told the ISPI conference that China has “stolen the show from Russia”, once the main rival to the western powers for influence in the region. Meanwhile, Russia’s declining influence has seen its clout dwindle to Serbia and Bosnia’s Republika Srpska following NATO accession by Montenegro and North Macedonia. Even in Serbia, the latest general election in 2020 saw a loss of influence for the Serbian Socialist Party led by Ivica Dacic, one of the strongest pro-Russian voices in Belgrade.

“Russia is realistic about the capabilities it has at its disposal. It sees itself as a spoiler not as a replacement for the EU,” commented Bechev, noting that Russia is still making headway with specific projects that matter to Moscow, in particular in the energy sector.

Thus while the EU has been losing ground, neither Russia nor even an ascendant China are exceptionally strong in the Balkans either, as Carl Bildt, former UN special envoy to the Balkans, put it on the ISPI panel. Bildt commented: “It is not that Russia, Turkey and others are strong actors in the Balkans, but if the EU becomes weaker, others can by definition become stronger without being particularly strong.”