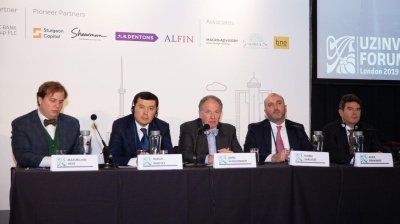 The Uzinvest Forum in London aimed to raise awareness of the Central Asian country that has promised so much but failed to catch the eye of many in the West — so far.
By Daniel Rad in London November 29, 2019

There have been several conferences globally raising awareness of Uzbekistan in recent years as the country comes in from the cold. But none, so far, have given much credence to private sector players who are driving much of the transition in the country from a top-down control system to a liberalised market. An event in London this week attempted to — at the very least — bring in some youthful voices from the country’s booming private sector.

The UzInvest Forum held on November 27 at the sumptuous Thames-side Glazier’s Hall, co-sponsored by the Ministry of Investment and Foreign Trade of the Republic of Uzbekistan and hosted by London-based Adam Smith Conferences and Eurasian Investor, was the first in the British capital aiming to attract some of the City’s money.

The large international forum with more than 200 people in attendance aimed to raise awareness of the Central Asian country that has promised so much but failed to catch the eye of many in the West — so far.

Described as the “the Uzbek Davos” by those attending the event, the organisers managed to bring in some top names from the Silk Road country to have one-on-ones with their British counterparts. Those officials included politicians First Deputy Minister of Investment Laziz Kudratov and Deputy Minister of Finance Odilbek Isakov, as well as the director of the Agency for Development of the Capital Market Atabek Nazirov, to name a few.

Esfandiyar Batmanghelidjh, the founder of Eurasian Investor, explained that the UzInvest Forum marks the completion of the first stage of economic reforms in Uzbekistan, as well as the beginning of the next.

“The opportunity for European multinational companies and financial investors is obvious — Uzbekistan will offer pioneers a steady increase in income and profits for years to come,” said Batmanghelidjh. “However, in order to proceed to the second stage of economic reform, it is necessary to attract a wider circle of foreign companies and investors to the Uzbek market. We want to help launch this second phase.”

The event was mostly focused on growth sectors, including pharmaceuticals, IT and retail. However, it was the experience of the private sector players in the country which got peoples’ attention, rather than the government officials explaining ways to invest.

One of the highlights of the event was the CEO of Korzinka supermarkets Zafar Khashimov, who made a point on how the bazaar merchant-mentality managed to survive Soviet-era rules on illegal traditional markets. It was there he discovered his passion for trade and opened his first retail outlet, he said.

“I have worked very hard to make Korzinka what it is today, and there is a huge opportunity to make our brand the leader in the market in the future,” Kashimov said. He added that what he sees is a growth in the retail market in the near future as shopping habits in the country continue to change to a more globalised model.

Along with his descriptions of his business’ growth he showed photos of how the Uzbek retail environment has changed in recent decades including a partially empty local butchers with women dressed in local garb.

Uzbekistan is a youthful country, at least by Western standards, with a reported 60% of the population under the age of 30. This being the case, this generation which has only known digital technology is moving into the tech sector with gusto, at least one group of panellists said at the event.

Jakhongir Pulatov, director of Cambridge Learning Centres, was one of the speakers on stage. Beyond the English language teaching aspect of his work he also has a large digital following on platforms including Instagram, where he has more than 92,000 followers on his personal account alone. The English language expert noted some of his thoughts about the show.

“The young people of our country are using technology for new means and if you want your business to grow you need to be included in this,” he said.

His point was partly echoed by a new entrant to the country, Michael Khoi from the Orient Swiss Group, who said the best advice would be for international companies to look at the Uzbek market with a clear set of objectives and understanding when launching their product.

“What works in one CIS market does not work in another, from my experience, and what we have learned is to indigenise our products for the local market [to achieve maximum success].”

Banking is also seen as a major area of interest with current technologies evidentially antiquated and European firms very interested in helping the country “leapfrog the rest of the world”.

Issues including a lack of open banking operations remain a hurdle for the country, but as one speaker, John Schlesinger, chief enterprise architect at Temenos, said, the country has lagged behind the digital technology system for so long it has the opportunity to jump straight to the latest software and systems employed in Western Europe.

As Schlesinger pointed out: “Uzbekistan has 30 fully regulated banks, 110 credit unions and 80 microfinance institutions.” And of those banks, 80% will no longer be operational without assistance, he noted. He went on to say only with low-margin banking and artificial intelligence in play would new companies stand firm as the industry changes.

"Investment in technology has the ability to rapidly alter Uzbekistan's banking networks and the financial market in the country, long one of the most underbanked in the former Soviet space. However, this will have to be root-and-branch, from the central bank investing in new clearing systems in line with international standards to investment in new technologies such as mobile phone-based banks,” according to Maximilian Hess, head of political risk at AKE International and fellow at the Foreign Policy Research Institute, who spoke at the event.

He went on to say a number of investors have declared interest but the government must “match its pledges with demonstrable actions and reforms to enable these investments”.

“If the government steps up its support, the country could quickly adopt mobile banking and electronic payment systems unparalleled elsewhere in Central Asia, with the country's sizeable population making it a more attractive market than any of its neighbours. Doing so would also enable Uzbeks themselves to invest in and benefit from the country's economic reforms," Hess said.