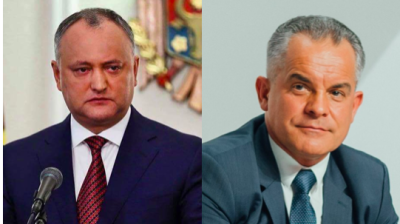 President Igor Dodon (left) is locked in a power struggle with oligarch and politician Vlad Plahotnuic (right), who controls many state institutions.
By Iulian Ernst in Bucharest June 10, 2019

The Pro-Russian Socialists that are de facto led by President Igor Dodon and the pro-EU ACUM alliance reached an agreement on June 9 to form a parliamentary majority and a government that has already been recognised by the European Union and Russia.

However, the country has been plunged into political crisis as oligarch Vlad Plahotniuc, the leader of the outgoing ruling majority, has used his influence over the court system to try to hold onto power. Plahotniuc claimed irregularities and, backed by the Constitutional Court, his ally outgoing Prime Minister Pavel Filip called repeated elections on September 6.

The Constitutional Court supported Plahotniuc’s outgoing ruling coalition by a chain of decisions issued on June 7-9. It de facto dissolved the Parliament by firstly restraining its power by a debatable interpretation of the Constitution, then temporarily suspended Dodon from his post — a measure used several times under the last government — in order to allow Filip to call early elections on September 6.

Moldova is increasingly considered a "captured state" as Plahotnuic has extended his control over institutions including the judiciary, as stressed in a European Parliament resolution adopted last year.

Dodon and his new coalition refuse to accept Constitutional Court’s decision, and on June 8 elected Socialist Zinaida Gereaceanii as parliament’s speaker, and endorsed a government headed by Maia Sandu, one of the leaders of ACUM.

The situation became critical when, on June 9, Filip’s government refused to accept its term had expired. Since Plahotnuic’s Democratic Party is still in control of most state institutions, the Official Journal has already published the Constitutional Court’s decision saying the government formed by the new parliamentary majority is not legal.

The new government, which has been endorsed as legitimate by EU High Representative for Foreign Affairs and Security Policy Federica Mogherini, will hold its first meeting on June 10 in the parliament building, since the outgoing government is not willing to leave the government building, or acknowledge the new prime minister.

Moldova has been without a new government since the February 24 general election, which produced a parliament with three major forces — the Socialists, the Democratic Party and ACUM — none of which are natural allies.

The situation was precipitated on June 7, when the Constitutional Court of Moldova answered an inquiry submitted by Dodon on May 22 as to when he can decide to dissolve the parliament. In its decision, the court refused to answer the question directly, but said that the government “must be formed” within 90 days after the validation of the lawmakers — a deadline that was expiring the very same day.

At that time, Dodon’s Socialist Party was formally negotiating with both the other political forces in the parliament on formation of a ruling coalition.

Representatives of the European Union, Russia and US had visited Moldova on June 3 — when, political analyst Dan Dungaciu explains, the “unnatural coalition” of pro-EU and pro-Russia parties was sketched in a broader regional context. It is an arrangement brokered by the European Union and Russia which, for the first time since 2014 (when Russia annexed the Crimea) are on the same side of the table against Vlad Plahotniuc, analyst Armand Gosu said more bluntly.

Shortly after the visit, Sandu’s Party of Action and Solidarity (PAS) announced its members had given the go ahead to working with the Socialists, despite their major policy differences. “The decision is not based on trust and partnership with the socialists, the decision is only feasible to stop a dictator from taking possession of the country for the next 10 years, at least,” a statement from PAS said.

But shortly afterwards, it was revealed that the Socialists were also in talks with the Democrats. What Dodon was aiming for in his negotiations with Plahotniuc on June 6-7, remains unclear. He was either attempting to increase its bargaining power vis-a-vis the pro-EU parties, or — a less likely option — was negotiating on his own despite Moscow's firm recommendation against working with Plahotniuc .

Plahotniuc recorded the negotiations and published them, along with an agreement allegedly proposed by Dodon in an attempt to compromise both Dodon (as working against the interests of the country, for Russia) and pro-EU parties (which, allegedly, accepted Dodon’s terms).

On June 8, the Constitutional Court, answering an inquiry submitted one day earlier by two lawmakers from Plahotniuc’s Democratic Party, issued the decision saying that the parliament elected on February 24 “is going to be dissolved under Art. 85 of the Constitution” therefore it can no longer perform the duties of a functioning parliament: electing its own bodies, endorsing a government.

The decision is “difficult to understand” and “seems to be arbitrary in the light of the text of the Constitution and of international rule of law standards,” the Council of Europe said in a statement, asking the Venice Commission to review it. The decision is indeed hard to understand, since Art. 85 paragraph (1) of Moldova’s Constitution clearly stipulates that “in the case forming the Government is impossible or the procedure of adopting laws is blocked for 3 months, the President, after consulting the parliamentary factions, may dissolve the Parliament.”

In defiance of the court’s ruling, the parliament was summoned and with the votes of 57 of the 61 attending members, elected Greaceanii as speaker. The 61 lawmakers later appointed Sandu as prime minister and quickly endorsed the new government, led by a pro-EU politician but with the Socialists in several key positions.

The parliament also dismissed the heads of the national anticorruption directorate (CNA) and the head of the intelligence services (SIS), both of which are under the influence of Plahotnuic. More heads of public institutions are due to be dismissed at the government meeting on June 10, under the agreement reached by the Socialists and ACUM.

Later the same day, the Constitutional Court decided that the parliament’s and president’s actions resulting in the formation of a new government were void. Under a formal interpretation, the decree issued by the president is valid from the time it is published in the Official Journal — which is still under the control of Plahotniuc’s outgoing government.

On June 9, the court suspended Dodon and appointed Filip as acting President. Filip immediately moved to dissolve the parliament and issued a decree on organising early elections on September 6. Unlike Dodon’s decrees, the decree signed by Filip has been published in the Official Journal.

The European Union stands ready to work with the democratically legitimate government, on the basis of a mutual commitment to reforms and to the core principles enshrined in our Association Agreement, a European Commisison statement signed by High Representative and Vice-President Federica Mogherini and Commissioner Johannes Hahn reads.

“The European Union strongly reiterates its call for calm and restraint,” the statement continues. Dialogue between democratically elected representatives must remain the key to finding a solution to the current political crisis.”

Armenia’s coronavirus plight worsens with more than 1,000 more infections in two days
6 hours ago
Authorities “may be sowing seeds of Turkish economy’s downfall” by pumping money at fastest rate for more than decade
7 hours ago
Turkey’s electricity consumption collapses 17% in May
1 day ago
Russian government presents National Recovery Plan to President Putin
1 day ago
Belarus president pledges to prevent 'Maidan' during August election as thousands on streets support opposition
1 day ago