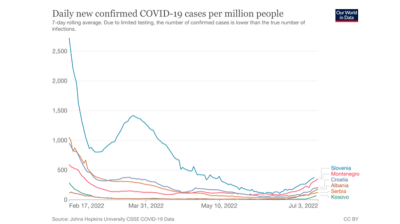 Coronavirus (COVID-19) cases are increasing again in several Southeast European countries just as the region starts to welcome large numbers of tourists for the 2022 summer season.

After the lifting of most coronavirus related restrictions and a period of low infection numbers, several countries are now reporting the highest numbers of new infections for several months.

The rise in infections compared to the size of the population is particularly strong in Slovenia and Montenegro, but upturns are also evident in Albania, Croatia, Kosovo and Serbia.

The real numbers are believed to be considerably higher than those officially reported due to people either not getting tested or being asymptomatic and not realising they have COVID.

The upturn took place as the region embarks on the 2022 summer season that tourism-dependent countries such as Albania, Croatia and Montenegro had expected would involve a rebound to pre-COVID levels of activity.

In Albania, where 671 new infections were reported in 24 hours on July 2, over half of them in the capital Tirana, the health ministry has urged people to get vaccinated. Those who have been vaccinated were urged to get a booster dose.

“Due to the increase in the number of citizens affected by COVID-19, the Ministry of Health again calls on citizens not to neglect the anti-COVID vaccination, especially in this period of increased contacts, due to movements during the summer season,” a ministry statement said.

As of July 2, there were 3,685 people with coronavirus in the country, including 23 in hospital.

Croatia's health authorities reported the highest daily number of new coronavirus cases for the past two months on June 29, with the figures rising constantly in the past days, N1 reported.

Despite the sharp rise of new cases, for the moment the Croatian authorities are not discussing imposing restrictions.

However, the rise comes at the start of the summer tourist season, which is of key importance for Croatia’s GDP growth. If the coronavirus spreads further, this might jeopardise the season.

1,197 new cases were confirmed per 24 hours as of June 29, while their number for the past seven days stood at 4,201 – up by 64% on the previous week. It is more than double the amount two weeks ago, indicating a rapid hike of confirmed cases.

The government scrapped almost all restrictions in April due to the low intensity of reported cases and the upcoming summer tourist season.

On June 29, Prime Minister Andrej Plenkovic commented that, despite the current spike, the government does not intend to impose restrictions, because the number of patients in hospitals is low.

In North Macedonia, the number of new infections started to increase lately with 163 new cases reported on June 30, but doctors said the new sub-variants of omicron do not cause a severe clinical picture and the increase in the number of infected is due to the summer period and the high proximity of people.

Serbia reported another 749 people were infected with coronavirus in 24 hours to July 3, and two people had died from the virus. According to the Ministry of Health, there are 118 patients receiving hospital treatment, seven of whom are on ventilators.

Romania’s public debt hits 50% of GDP at end-May
7 hours ago
Hungary's automotive industry continues to rebound in June
1 day ago
Russian GDP contracted by 4% y/y in the second quarter of 2022
1 day ago
Serbia’s annual inflation accelerates further to 12.8% in July
1 day ago
Poland’s CPI growth rate picks up just 0.1pp to 15.6% y/y in July
3 days ago