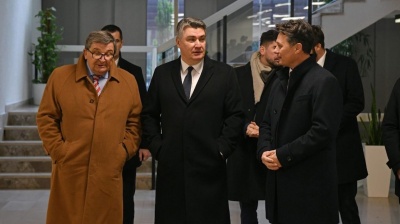 President Zoran Milanovic made the controversial comments during a visit to the KRAS food company. / predsjednik.hr
By bne IntelliNews January 25, 2022

Croatia’s President Zoran Milanovic said on January 25 that Croatian troops would not be involved in a possible escalation of tensions between Russia and Ukraine, sparking a public row with government officials.

Prime Minister Andrej Plenkovic — who has an adversarial relationship with the president — was quick to point out that his statement did not represent Croatia’s official position. The country officially became a member of Nato in 2009.

“We have nothing to do with this [conflict]. If it comes to escalation, all troops will be withdrawn,” Milanovic told reporters during a visit to the KRAS food company, as widely reported by local media.

He added that there were other ways to help Ukraine and that Ukraine does not belong to Nato.

“The place of Ukraine is not in Nato,” Milanovic said.

He also accused the EU of triggering a coup “in Ukraine in 2014 when the pro-Russian president Viktor Yanukovych was ousted”.

“Croatia has nothing to do with this and I will not allow it to have. And Plenkovic can threaten with this as much as he wants to,” Milanovic said.

Plenkovic reacted to Milanovic’s statement, saying he was speaking as “some Russian official”.

“There are not our soldiers in Ukraine and I do not know what soldiers he is thinking of,” Plenkovic said as quoted by N1.

"I apologise to the Ukrainians on behalf of the government, they are currently occupied. He [Milanovic] says they are corrupt, this statement has nothing to do with the government," the prime minister said.

"Croatia's policy is to de-escalate tensions, prevent conflicts, support the integrity of Ukraine. That is our fundamental position," Plenkovic added.

Milanovic and Plenkovic previously clashed over the prime minister’s visit to Ukraine in December, which the president called “plain charlatanism” and said it could negatively affect Croatia’s relations with Russia.

During the visit Plenkovic reportedly discussed with Ukraine’s President Volodymyr Zelenskiy the conflict in the Donbas region where separatists declared breakaway republics in 2014 and have been fighting with Ukrainian armed forces since then.

Reportedly, Plenkovic and Zelenskiy discussed a possible ‘Croation scenario’ in Donbas, referring to the reabsorption of the territory by military force.

Milanovic added at the time that he has sympathy for Ukraine but does not hate Russia.

“It’s a relatively uncomfortable situation. But there are 100,000 Russian soldiers on the border with Ukraine, and we don’t know what will happen tomorrow. What does this display of unending love mean,” RT quoted Milanovic as saying at the time.

As the current crisis unfolds, Croatia’s foreign ministry advised against travelling to areas in Ukraine that border Russia and to postpone travel to the rest of the country.

bneGREEN: EU to use €2.4bn of carbon credit cash to fund green projects in CEE

Russia denies defaulting on $100mn bond coupon payment
4 hours ago
A maze of smuggler tunnels: the Kyrgyzstan-Uzbekistan border
5 hours ago
Ukraine's Zelenskiy calls on the US to recognise Russia as a state sponsor of terrorism
5 hours ago
Amnesty International issues damning report on Lithuania’s migration centres
6 hours ago
At least a dozen killed in shopping mall bombing as Zelenskiy urges G7 leaders to impose more sanctions
6 hours ago