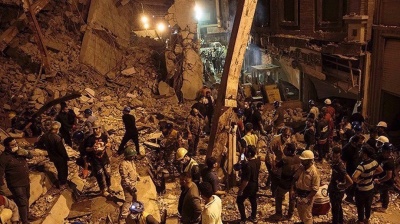 Search teams looking for victims and survivors of the building collapse. The death toll climbed from five to 31 over the course of a week. / PressTV.
By bne IntelIiNews May 30, 2022

As news spread that the death toll from last week's Metropol building collapse in southwestern Iran had climbed to at least 31, an emissary sent by Supreme Leader Ayatollah Ali Khamenei arrived to address mourners. He was not well received, according to a report from The Associated Press.

Posted video footage shows Ayatollah Mohsen Heidari Alekasir, surrounded by bodyguards and seemingly perplexed by the scenes that have greeted him, being shouted down as he tries to address mourners near the site of what was the 10-storey Metropol in the city of Abadan. Boos and shouts are heard from the crowd of hundreds. Unverified footage suggests that subsequently riot police, who had ordered the crowd not to chant against the Islamic Republic, clubbed demonstrators and fired teargas. At least one officer fired what appeared to be a shotgun, but it was not clear if it was live fire or so-called “beanbag” rounds designed to stun.

After the initial booing and shouting, the cleric is heard trying to address the crowd again, saying: “My dears, please keep calm, as a sign of respect to Abadan, its martyrs and the dear [victims] the whole Iranian nation is mourning tonight.”

The crowd responds by shouting: “Shameless!”

A live broadcast of the event on state television then cut out. Protesters reportedly later chanted: “I will kill, I will kill the one who killed my brother!”

Tehran’s Hamshahri newspaper reported that the protesters attacked the platform where state TV set up its camera for the occasion, cutting off the broadcast.

Social tensions in Iran have risen amid surging inflation, including steep hikes in food prices, and a series of strikes mounted by workers including teachers and bus drivers in Tehran. In the past year, the country has also been hit by protests over water shortages.

Abadan is located in oil-rich Khuzestan province, home to Iran’s Arab minority who complain about being treated as second-class citizens in Iran. Hamshahri observed that two tribes entered the city to support the demonstration over the deadly building collapse on May 24.

Amid allegations of corruption, the authorities acknowledged that the Metropol’s owner and government officials allowed construction to continue on the building despite concerns over unacceptable workmanship. Thirteen people have been arrested as part of an investigation into the disaster, including the city’s mayor, who was beaten by a crowd on the day of the tragedy, and two former mayors of the city.

First Vice President Mohammad Mokhber told state TV that "widespread corruption existed between the contractor, the builder, the supervisor and the licensing system."

The collapse has raised anxieties about the safety of similar buildings in the country. The disaster reminded many Iranians of the 2017 fire and collapse of the Plasco building in Tehran. That tragedy took the lives of 26 people.

In Tehran, the city’s emergency department warned that 129 high-rise buildings in the capital remained unsafe based on a survey in 2017, the AP said. The country’s prosecutor general, Mohammad Jafar Montazeri, has pledged to address the issue immediately.

Croatian president says Western sanctions aren’t working
10 hours ago
Kosovo’s PM Kurti says risk of new conflict with Serbia is high
10 hours ago
End of Vienna talks means US, Iran political approvals now needed to revive nuclear deal
19 hours ago
Western capitals wonder what kind of sanctions deal Erdogan may have cooked up with Putin
1 day ago
Leaders of Serbia and Kosovo to meet as they pull back from brink of conflict
2 days ago