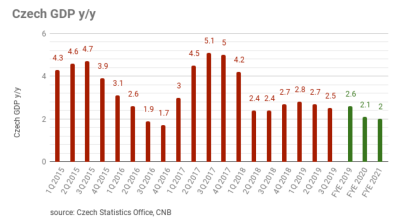 The Czech economic growth is projected to slow to 2.1% in 2020 from 2.6% this year, driven mainly by falling household consumption and reduced government spending, says the OECD
By Nelly Tomchikova in Prague November 22, 2019

The Czech economic growth is projected to slow down to 2.1% in 2020 from 2.6% this year, driven mainly by household consumption and government spending, as predicted by the Organization for Economic Cooperation and Development (OECD) in its new economic outlook. In 2021, OECD expects an economy to ease to 2-2.25%.

“Workers will still benefit from high wage growth, while unemployment will remain low. However, the external sector will limit growth as economic activity in the main trading partners is slowing, which will also lead to declining investment growth,” the report read.

According to OECD, the investment rate has dropped sharply in 2019, after the extensive of of EU structural funds a year ago and due to ongoing slowdown in neighbouring countries. “Industrial production and new orders have started to decline, indicating the impact of the slowdown in Europe. Exports are declining but less than imports, reflecting a greater diversification of the economy and some upgrading into global value chains.”

Inflation is expected to remain above the 2% target of the Czech National Bank in 2020 and 2021, being driven by food, energy and services prices. Inflation has been held down by Czech crown appreciation. “As relatively high inflationary pressures are projected to persist and high wage growth set to continue, the central bank will need to further adjust monetary policy to economic conditions, while taking into account the euro area monetary policy,” OECD said.

The Czech Ministry of Finance has just recently worsened its estimate of Czech economic growth to 2% next year in its new macroeconomic November forecast, down from 2.2% in its August forecast. This year economic growth should amount to 2.5%, the ministry predicted.

Also the Czech National Bank recently downgraded its economic growth estimate in its new forecast from November 7 to 2.4% for next year from the 2.9% it predicted in August. The bank left its estimate for 2019 at 2.6%. According to the Governor Jiri Rusnok, for 2021, the bank expects the economy to grow by 2.8%, while in August it estimated a growth of 3%.

The European Commission lowered its estimate of Czech economic growth to 2.5% in 2019, mostly to be driven by domestic consumption. It predicts GDP growth will slow to 2.2% in 2020, down by three-tenths of a percentage point compared to its July forecast, and to 2.1% in 2021.

According to the Czech Statistics Office ́s,  the Czech economic growth has slowed to 2.5% year-on-year and 0.3% quarter-on-quarter in 3Q19, most likely driven by household consumption.

Belarus GDP grew by 1.2% y/y in 2019
1 day ago
Jump in Polish CPI confirmed at 3.4% y/y in December
2 days ago
Romania’s external debt rises on chronic wide CA gap
4 days ago
Ukraine consumer inflation ends 2019 at 4.1%
5 days ago
The number of unemployed Czechs reached its lowest level since 1996
8 days ago