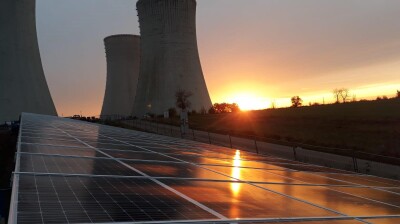 Shares in Czech utility CEZ rose more than 4% on Tuesday on the news of the Czech government plan. / CEZ
By Albin Sybera September 14, 2022

The Czech government has outlined plans for a national cap on energy prices and a windfall tax, ahead of European Commission proposals set to be proposed on September 14. The Czech price cap is seen as a back-up plan in case a common EU-level approach is not reached.

At Monday’s press conference, Czech Prime Minister Petr Fiala introduced capping of prices for households at CZK6 (€0.24) per kWh of electricity and CZK3 (€0.12) per kWh of gas, which households should see already in their November bills, mitigating the current cost of living crisis.  The price cap is approximately €200 per MWh (without VAT), higher than the €180/MWh price cap the European Commission is expected to announce, along with proposals to force fossil fuel firms to share their excess profits.

The measure is expected to cost CZK130bn (€5.3bn) at most, which the state will fund using dividends from state companies, as well as income from planned windfall taxes and from emission allowances.

Minister of Finance Zbynek Stanjura added that he expects income from windfall taxation next year to be CZK70bn (€2.9bn). The legislation should be in place for three years, but if the extreme circumstances bringing about the high energy prices ease, then companies won’t be obliged to pay the tax.

The European Commission will propose a levy of 33% of firms' surplus profits – defined as profits that are above 20% of their average taxable profits from the past three fiscal years, Reuters reported.

Opposition parties, including the populist ANO party of controversial ex-premier Babis and the far-right SPD have criticised the cap for being set too high and coming too late.

Cabinet members' public comments about introducing special taxation were in the past weeks met with criticism by Czech right-wing media, neoliberal hardliners inside  Fiala’s own  rightwing ODS party, as well as ANO.

Capping is also applicable to providers of public services such as hospitals and schools, as Ivan Bartos, Chairman of the Pirate Party and Minister of Regional Development, highlighted in his Facebook post, adding that “it is important to focus on the sources”.

“Energy companies have above average income today as a result or rising energy prices, this comes primarily from the pockets of the households and it is correct to return these money to the household”, posted Bartos.

Shares in CEZ, the majority state-owned utility,  rose more than 4% on Tuesday on the news of the Czech government plan, because the cap was set higher and the windfall tax lower than feared. According to Reuters, analysts said the price cap would still allow CEZ to sell power at prices higher than what it was booking for this year, while shareholder payouts could also get a boost as the government looks to dividends to help pay for the support measures.

The Czech energy market is dominated by CEZ,   EPH, owned by  billionaires  Daniel Kretinsky and Patrik Tkac, and the Sev.En group of Czech coal tycoon Pavel Tykac. According to economist Stepan Krecek, an advisor to Fiala, discussions with the energy tycoons are at an advanced stage. “It is complicated, many things can yet change. Key point is capping of the electricity prices so that the end customer pays between CZK6-10 (€0.24-0.41) per kilowatt-hour”, Krecek was quoted as saying by Seznam Zpravy last week. CEZ ally and South Bohemian governor Martin Kuba praised the approach, saying “finally all the important players are at play”.

EU energy ministers on Friday were divided over proposals for a cap on prices of Russian gas imports, pushing the idea back to the European Commission.

Czech representatives did not support the European Commission’s proposal to cap prices only of Russian gas imports at the meeting in Brussels, preferring a cap on all gas imports. Slovak and Hungarian energy ministers also opposed the idea, which they feared would cause Russia to end exports and thus lead to shortages ahead of the winter because of their countries’ high dependence on Russian imports. The measure of capping Russian gas imports was called absurd by Hungarian Foreign Minister Peter Szijjarto at the EU’s energy meeting.