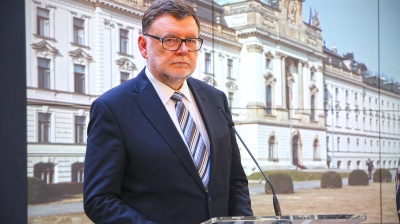 The Czech government has bowed to reality and revised this year's budget deficit projection up to CZK330bn (€13.4bn) but the coalition's leading party, the rightwing Civic Democrats (ODS), is still refusing to admit that reducing the deficit will require tax rises.

The government this week approved an amendment to the state budget for 2022 that increases the deficit, the finance ministry informed in a press release.  The revenues of the amended budget will amount to CZK1.678 trillion and expenditures to CZK2 trillion. Compared to the previous amendment from March this year, the deficit increased by CZK50bn.

The Chamber of Deputies will address the amendment in September. Since the government has a majority of 108 out of 200 votes in the lower house, the budget is likely to be passed.

"When preparing the budget, we could not have known that a few weeks later a war would start 300 kilometres from our borders, which would have a direct and indirect impact on Czechia and its state budget. The originally approved budget could not have taken these impacts into account," said Prime Minister Petr Fiala (ODS), as quoted by the Czech News Agency.

"The amended budget with a deficit of CZK330bn is a reality brought about by the war in Ukraine. Due to rising prices, the state budget has to cope with additional expenditures led by compensations for high energy prices, a second extraordinary valorisation of pensions, an allowance for families with children and the first ever purchase of gas for the state material reserves,” commented Finance Minister Zbynek Stanjura (ODS), according to Czech Television.

“While maintaining the high investment activity of the state, which exceeded last year's level by 14% in the first half of the year, I consider the new deficit a satisfactory compromise solution," Stanjura added.

The difficult state budget situation has forced the government to consider taxes targeted at specific sectors or companies. High energy prices and rising inflation have sparked a debate among coalition partners on whether the Czech Republic should introduce a windfall tax, an extraordinary tax on those companies that have made extraordinary profits due to the crisis.

However, the ODS, which holds the prime minister position as well as the finance ministry, placed in the coalition agreement a prohibition on increasing taxes to close the yawning deficit bequeathed by the previous government of billionaire Andrej Babis as it wrestled with the COVID-19 pandemic and splurged ahead of last November's general election.

Vladimír Spidla, a former Prime Minister (CSSD) and EU Commissioner, said the government's sums do not add up. "It is absolutely necessary to introduce a new tax framework," he said for Czech Television, mentioning, for example, an increase in corporate tax to capture extraordinary profits. The cabinet has cut its own revenues, for example by abolishing the super gross wage, Spidla added.

The Czech Republic's tax revenue in relation to GDP is below the EU average, at around 36% compared to 41% in 2020, putting it behind Slovenia, Croatia, Poland and Hungary among the CEE member states, though the ODS continues to maintain it is too high.

According to political commentator Jiri Pehe, it is increasingly clear that the government's hands are tied by two dogmas held by the ODS. The first is the neoliberal mantra of low taxes. The second is the continued opposition to the introduction of the single European currency.

“At the beginning of 2020, the ODS supported Andrej Babis' tax reform proposal, which abolished the so-called super gross wage, although it was clear that without the simultaneous introduction of other taxes, the reform would cause a shortfall in state budget revenues of roughly CZK100bn per year,” he noted.

“The government will not increase income tax, nor will it agree to tax higher incomes more heavily in the form of a [more] progressive tax,” he told daily Pravo earlier in July. "The economic programme of the SPOLU coalition has four pillars: we will not raise taxes, the problem of the budget is on the spending side, the solution is to support the economy and simplify business, effective involvement of European money and tax changes to support families," he stressed a year ago, three months before the general election.

According to Cyrrus Chief Economist Vit Hradil, then government's stance is is an illusion because the state cannot cut its spending by hundreds of billions of crowns. Hradil believes the government will eventually have to resort to increasing personal income tax if it wants to significantly reduce the state budget deficit from the planned levels of around CZK300bn this year and next year.

"All the other sources of income are either too marginal and will not solve the problem even with a significant increase, or they carry too significant undesirable side effects," Hradil said, as quoted by Pravo. According to him, the government will not be able to substantially reduce the budget deficit without raising taxes.

In his view, any effort to explain to people that in the midst of the energy crisis the state should limit the provision of health care, education or security, for example, would amount to political suicide. At a time when the economy is heading into recession and Czechs are experiencing a cost of living crisis, the government faces upper house elections this autumn and a presidential election in January, at which Babis is expected to stand."Even from an economic point of view, this would be a strange step, because the Czech state does not provide an abnormally wide range of services compared to other developed countries," he said, as quoted by Novinky.cz.

Rejecting higher taxes while maintaining the current volume of state agendas, Hradil said, would result in long-term deficits in the hundreds of billions, which would lead to rising debt and therefore interest costs, loss of favour in the financial markets and hitting the debt wall. "No extraordinary profits tax will save us from this, which would yield at most low tens of billions, and even then only on a one-off basis," Hradil added.

Trinity Bank economist Lukas Kovanda, however, believes the government could avoid raising taxes, while drawing up a multi-year plan to gradually cut public spending. "The government must save money on the running of the state, for example by significantly laying off employees paid from public money. Otherwise, it will have to raise really substantial taxes, such as income tax or VAT, if it wants to achieve at least a somewhat acceptable deficit," he told Pravo.

Czech National Bank (CNB) Deputy Governor Eva Zamrazilova perceives the increase in the deficit as "acceptable". She recalled that Babis' government had planned to submit a deficit of CZK380bn. "This is still an improvement, and in an extremely problematic situation. So I see it more as a success and as an effort to really help," she said in a Czech Television interview.