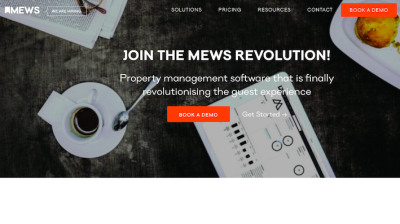 Czech startup Mews, which has created a complete reservation management platform for hotels and hostels, has attracted $33mn in its latest investment round (Series B), the company said in a press release posted on its blog.

The funding was provided by a global investment firm, Battery Ventures, which previously supported projects that eventually ended up in the hands of the tech giants such as Apple or Oracle. Battery Ventures’ investment pushed Mews’ value up over $200mn. Its owners expect next year’s potential valuation to exceed the $1bn ‘unicorn’ threshold, Forbes Czech edition noted on August 29. The latest investment follows a $7mn in Series A funding round last year.

“As hotel and other hospitality property owners look to address the challenge of competition from peer-to-peer platforms like Airbnb, Mews provides hoteliers with the tools to [avoid having to] worry about the day-to-day of running the business, and instead focus on improving guest experience and helping travellers have the trip of a lifetime,” said Battery Ventures’ principal, Sanjiv Kalevar.

Mews recently opened a new office in New York. It would like to expand in the US and hire more people for its team, currently at 270 people. The Boston-based investor is supposed to help the company to set up a strategic partnership on the US market. Interestingly, money was not the main motivation, as Mews has been profitable ever since it was founded.

According to Mews CEO Matthijs Welle, the company wants “to redefine the modern stay from the ground up by improving operations, enhancing branding and empowering staff to become a high functioning and resourceful experience design and curation team.” He added that Mews is set to be on course for consecutive 200% year-on-year growth.

Mews founder Richard Valtr told the CzechCrunch that the company was in talks with one of the biggest global hotel networks. “Nowadays all major hostel chains and many big hotels around the world use Mews, and we see their number rising in the future,” said Valtr. As he put it, Mews’ goal is to modernise the outdated hospitality system, so he does not plan to sell the company any time soon.

US promises up to $1bn in energy infrastructure financing for Three Seas Initiative
"Westlessness" dominates the discussion at the Munich Security Conference
WeShare to enter Budapest, Prague car-sharing markets