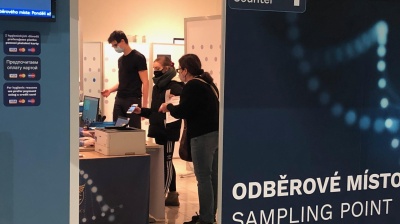 Parliament has agreed a new law on pandemics that will allow restrictions to be maintained outside a state of emergency.
By bne IntelliNews February 19, 2021

Hospitals in Czechia have reported a record number of coronavirus patients with severe conditions – their number reached 1,227 on February 18 – as the British variant of the virus spreads fast across the country.

The capacity of the hospitals has shrunk to 14% of beds in intensive care and high dependency units. According to the Health Minister Jan Blatny, the Czech hospitals may be overwhelmed with coronavirus patients in two or three weeks.

“If we together don’t prevent further spread at this level, then within two or three weeks the whole country will be likely in the same situation,” Blatny said, quoted by Reuters.

The minister said the government might consider asking its neighbour Germany to take in a limited number of patients when the intensive care bed capacity drops to single digits.

Just recently, Germany closed its border with Czechia as along the border it has posted the highest coronavirus incidence rates, of over 300 cases per 100,000 citizens. Currently, only selected cross-border medical workers, critical sectors workers and lorry drivers transiting Germany are allowed to cross into Bavaria for short-term entry and must provide a negative PCR test no older than 48 hours.

The government is now facing a huge dilemma: It has to decide between tightening the measures even more or reopening shops and sending students to schools, as demanded by businesses and some opposition parties.

“The opening of shops is a significant shift. It's a big psychological break. After a long time, people will see the light at the end of the tunnel, we will ease it [restrictions] slowly, and if we manage to do it, it is a great signal that we will be able to continue. I am convinced that we can do it together,” said Industry and Trade Minister Karel Havlicek on his Twitter account.

While Blatny also agrees to open the shops under strict conditions, Education Minister Robert Plaga tweeted that sending children back to school is a priority and the reopening of shops can wait.

“If the return of pupils to schools is a real priority not only for education ministry, other changes to the measures (for example opening shops) are not possible, and the increase in social contacts when returning to schools must be balanced by mandatory testing in manufacturing companies and maximum use of the home office,” Plaga said on his Twitter.

The President of the Czech Medical Chamber Milan Kubek warns against the idea of easing the restrictions. “Many people here don’t take the epidemic seriously, they fear other things than COVID, they think this does not concern them. The government must not make the same mistake it made in the run up to Christmas when it reopened shops to please the public. It is high time we learnt from our mistakes,” Kupka said, as quoted by Prague International Radio.

The Czech Chamber of Deputies approved the law on pandemics on February 18, which should provide a means of handling the coronavirus crisis once the state of emergency is over. The law contains compensation for the companies hit by the COVID-19 situation, as insisted on by the opposition. Last week parliament had refused to prolong the state of the emergency but the government imposed it anyway with the backing of regional governors.

According to the former health minister Roman Prymula, the government should introduce hard lockdown for two to three weeks.

"We are getting to a crossroads where we really have to admit, and there are not many options, that either there will be a short-term hard restriction, two to three weeks, followed by easing, or we will continue in the regime as we currently are in," Prymula said, stressing that the situation is deteriorating every day and within one to two weeks, medical facilities will reach their capacity.

Russia finally sends all the documentation required and the COVID-19 vaccine is expected to be approved for use in the EU in the near future.