Czech industrial production puts in a surprise 3.2% growth in May, resisting German slowdown 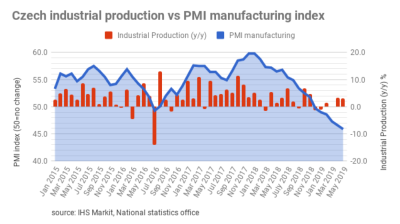 Czech industrial production surprised, expanding by 3.2% in May when a 1% contraction was expected
By bne IntelliNews July 9, 2019

Czech industrial production surprised analysts after it increased by 3.2% year-on-year in May, driven mainly by a 7% acceleration in the automotive industry, based on data published by the Czech Statistics Office on July 8. The consensus was for a 1% slowdown.

"While a more than 3% growth rate in April was considered to be a one-off, Czech industry maintained its solid pace in May and surprised market estimates on the upside," said the ING Chief Economist Jakub Seidler, adding that this is a little bit surprising as domestic automotive producers signalled a slowdown in a number of produced cars, to 2% after 7% growth in April.

The pick up in industrial production also standings in stark contrast to a collapse of Czechia’s PMI in June, which plunged to its lowest level in the last 10 years, posting 45.9 points, and a fall in the confidence surveys.

Industrial production was expected to do  badly thanks to the weakness of the German economy.

"May figures of the Czech industry still contrast with expectations and, indeed, with the results of, for example, German industry, which is down by 3.7% y/y," added CSOB analyst Petr Dufek, as cited by the Czech News Agency (CNA).

Industrial production increased by 1.1%, month-on-month. The value of new orders accelerated by 4.1% y/y, with non-domestic and domestic new orders at 3.9% and 4.3% growth, respectively, driven mainly by an increase in manufacture of motor vehicles, up by 6.3%, manufacture of electrical equipment by 6.5% and manufacture of basic metals, up by 5.4%.

The average registered number of employees in industry went down by 0.5% in May y/y, with average gross monthly nominal wage amounting to 6.7% y/y.

Seidler warned that "despite more positive figures coming from domestic industry in the last two months, caution remains in place." He anticipates Czech industry to slow to 1.5% this year, considering even that to be a positive result in the context of the growing external pressures from weak German growth and the impact of Brexit.

Despite the positive results in May, the domestic industrial production will be affected by the unfavourable economic situation of Czechia’s main trading partners in the coming months, according Raiffeisenbank analyst Lukas Ruzicka.

Industry has already peaked in the business cycle and production growth will remain subdued in the coming months. "On average for the whole of 2019, we expect industrial production dynamics to be substantially lower than last year, only slightly above one percent," he added, as cited by CNA.