Czech inflation rate in May posts another record 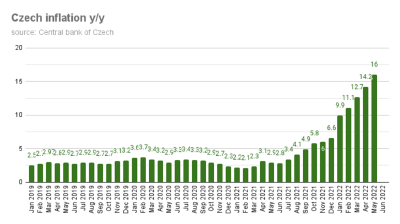 Czech annual inflation in May rose to the highest level since December 1993, when consumer prices increased by 16% y/y from 14.2% posted in April. Prices of housing, food and fuel continued to rise, according to data published by the Czech Statistics Office (CSO).

"Consumer prices significantly accelerated their y/y growth again, this time to 16%. They increased by 1.8% month-on-month, mainly due to an increase in food prices,” noted Jiri Mrazek, director of the Price Statistics Department of CSO.

According to Finance Minister Zbynek Stanjura, the government can help fight inflation by putting the brakes on the opposition's ideas for gigantic spending and by helping people affected by rising prices in a targeted and economical way, as recommended by the National Budget Council.

Prime Minister Petr Fiala added that the government is actively taking action against price rises, but he blames the current state of public finances on the wasteful policies of the previous government of Andrej Babis.

Inflation is expected to peak at around 17% at the beginning of 3Q22 and then slow down very gradually, according to Miroslav Novak, an analyst at Akcenta. "Throughout the second half of this year, however, it is necessary to count on annual price growth well above 10%. For the whole 2022, inflation can be expected to rise by between 14% and 15%, so high prices will be negatively reflected in weaker household consumption. The probability of an economic recession is clearly increasing," he warned.

According to the Czech Chamber of Commerce, high inflation will result in more businesses curbing their investments this year. "If companies do not invest in technological innovations, machinery and equipment, research and development, they lose their competitiveness against Western companies," warned Miroslav Diro, spokesman for the Chamber of Commerce. The chamber has therefore called on the government to encourage companies to spend more.

High inflation rate in May is expected to lead to another significant increase in the CNB's interest rates, by at least 0.75 percentage point. The base interest rate now stands at 5.75%. "For the CNB, today's figures are a significant upside risk to inflation. Another one is the visibly weaker koruna, as well as higher inflation in the eurozone and possibly faster growth in European Central Bank rates. I expect the [CNB] bank board to decide on a rate hike of one percentage point to 1.25 percentage points in June to rise to 7%. The new composition of the bank board will then hold rates steady, but will probably not rule out further increases a priori," commented Jan Bures, chief economist at Patria Finance.

Pavel Stepanek, the chief economist at Fondee and a former CNB board member, and David Marek, the chief economist at Deloitte, also expect that the CNB board to have no choice but to respond hawkishly again at its next meeting. "The meeting of the bank board at the beginning of August with new board members will be extremely interesting. This may strongly suggest whether the CNB will continue on its current course or change its strategy," Marek said, according to the news agency.

"From the CNB's perspective, the May data are a clear signal for a further interest rate hike at the bank board meeting at the end of June. For the June meeting, I expect the base rate to rise by three-quarters of a percentage point or more. The debate on a possible further interest rate hike will be a hot topic for the CNB at the August meeting, when the new board will meet," said Radomir Jac, Chief Economist at Generali Investments CEE.

According to him, however, the CNB rates are approaching their peak. "But, in light of the current inflation figures, it is far from clear whether this peak will be reached at the June meeting of the bank board or only during the second half of this year," he added.