Czech inflation rate up to 6.6% in December 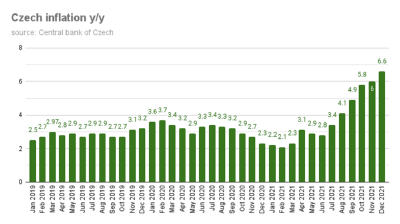 The Czech inflation rate accelerated to 6.6% year-on-year in December, up by 0.6 percentage points (pp) compared to November. This exceeds the upper boundary of the tolerance band around the Czech central bank's (CNB) target, by 1 percentage point above the CNB´s autumn forecast, according to a monthly report released by the Czech Statistics Office (CSO).

In month-on-month terms, consumer prices increased by 0.4%, affected by higher prices of food and non-alcoholic beverages.

“The current growth in costs stems both from the domestic economy, which is characterised by a renewed increase in labour market tightness and a strong consumer appetite, and from abroad. The latter mainly involves high industrial producer price inflation around the world due to disruptions to global production and supply chains and related shortages of components and materials,” said Petr Kral, Executive Director at the Monetary Department of CNB.

According to the analysts, the December inflation figure was distorted by the VAT waiver on energy, as without it, the inflation rate would have risen to around 8% in December. Given there is no other waiver on energy VAT expected this year, the single-digit inflation rate in January should be considered positive news, they stressed. Inflation is expected to go down again in 2Q22.

Based on a current working estimate of the CNB’s Monetary Department, annual consumer price growth will be around 9% in January, however, “in the current situation, this estimate is subject to a large degree of uncertainty, as the usual repricing of goods and services may lead to even greater growth in the price level at the start of this year due to the overall inflationary macroeconomic climate,” Kral noted.

Therefore, it is likely that inflation will reach double-digit levels for the next few months. “The increase in inflation will be driven mainly by the fact that administered prices will start rising strongly y/y from January onwards. This will be due to a rise in housing-related energy prices after the expiration in January of the temporary waiver of VAT on electricity and gas, which has reduced headline inflation by about one percentage point so far,” he concluded.

"We will experience a rate of inflation that we have not seen in the last 20 years. 2022 is likely to be a year of expense. Our monetary policy is trying to get citizens to save more and spend less. If they have to work more, I would leave that up to them," said vice-governor Marek Mora in an interview for website SeznamZpravy, stressing that the highest inflation rate is expected in January, February and March.

"In April, May, June, there should already be some slowdown [in consumer price growth]. A significant slowdown is expected in the 2H22, but the worst is yet to come," he forecast.